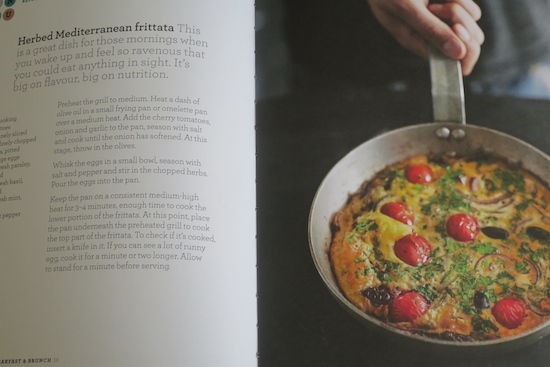 I’ve been trying to cut down my bread intake. Which isn’t too much of a faff, apart from the fact that in the mornings I do tend to rely on being able to pop a couple of slices of wholegrain into the toaster and spread on some butter and honey. I can live without bread at any other time, but when I get up in the morning I tend to be either too rushed or too hungry to think about having to sort myself an alternative. Bread-free breakfasts require a little bit more thought.

And so, some bread-free breakfast ideas. There are loads I have tried, but I’ll start with the one that I’ve been indulging in most recently: the Herbed Mediterranean Frittata. This idea is from Dale Pinnock’s excellent recipe book, The Medicinal Chef. (If you want very, very tasty recipes that are healthy and colourful with everyday ingredients that aren’t a bore to source, then this is it. It’s £9.49 from Amazon.co.uk and a tenner incredibly well spent, in my opinion. I have cooked a few things from this book now and have pored over it for hours to get inspiration for meals and dinner parties.) The Herbed Frittata is basically a thick, no-flip omlette that is packed full of juicy, mediterranean things. You can put in whatever you like, but here’s what I did (it’s not the same as Dale’s recipe, I bastardized it somewhat!):

Sliced Spring Onion (he says red, that probably would be better but I didn’t have any)

Quarter pack of Feta cheese (Dale doesn’t put cheese in at all but I MUST say that cheese does liven things up no end. It’s a bit boring without the feta, in my opinion)

Warning: the following picture does not look as attractive as Dale’s one in his cookbook – I’ll have you know it’s very hard to make an egg-based dish not look like cat sick: 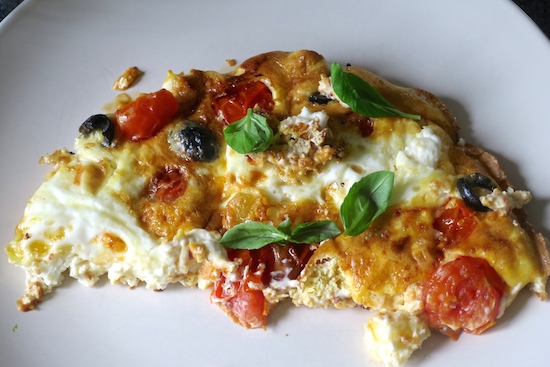 I have one of those tiny little frying pans that are perfect if you’re just making a frittata for one. You don’t really want to be spreading your frittata too thinly over a big old pan – keep it nice and compact, because you stick it under the grill to cook the top after the bottom has set on the hob. So. Olive oil into the pan, fry your red onions (finely sliced) and then add your cherry toms and olives. Beat your eggs and add them into the pan and then crumble in the feta and add some torn-up basil leaves. Dale also adds other herbs like parsley – didn’t have any, so it was basil all the way. Keep the pan on the heat until the bottom of the frittata looks set – only the top layer of egg and whatnot will move when you tilt the pan – and then stick the pan under the grill to cook the top. Make sure you don’t melt the pan handle or burn the frittata!

This is really filling – you don’t miss the bread and it’s quick to make. Not as quick as toast, granted, but it makes you feel a lot more wholesome. Not that I’m a total bread-basher, just so you know; it has its place in life. But I don’t want it every morning merely because I’m too lazy to prepare something else. More bread-free breakfasts coming your way soon!