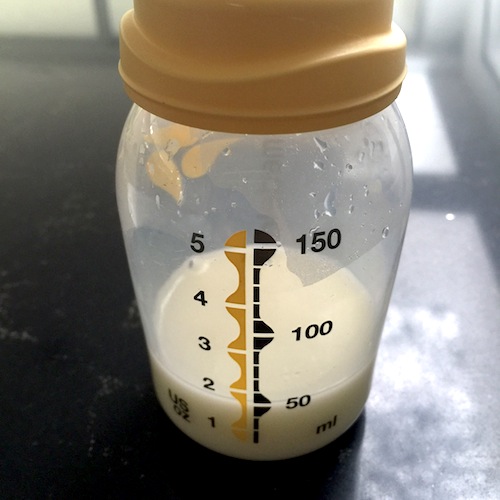 After a long gap in which I had made no attempt whatsoever to do any breastmilk expressing, a bout of mastitis the other week (see here) forced me to have another go. Talk about being thrown in at the deep end! Foggy-headed and feverish, messing about with boobs and pumps was the last thing I wanted to do. But my milk production was all over the shop and I knew I needed to feed through the pain and try to massage out the blockage, so I thought that it might be the ideal time to finally get to grips with the breast pump.

I started off with the manual MAM one, but I was a bit too weak and it all seemed like too much work, so the following night I rigged up the electric Medela Swing. The Medela Swing seems to be the most popular pump when you sift through online reviews; quiet, discreet, easy to set up… Even stumbling about the kitchen with my “flu-like symptoms” I managed to connect the wires and assemble the various parts, and within a few minutes I was ready to sit like a cow in a milking parlour. If cows in milking parlours sit on couches watching House M.D. on Netflix.

Well. I’m not sure what I did wrong, but after about twenty minutes I only had a tiny amount of milk covering the bottom of the bottle. The expression was certainly easier – I didn’t have to move a muscle – but the yield was, quite frankly, poor. I tried again the next day, in the afternoon this time, because I know that the night isn’t best for milk production, but again – poor yield. What confused me was that manually, I could still express, just very little was happening with the pump. (I mean it was definitely working – there’s nothing like seeing your nipple stretched out to an inch long down a plastic funnel to know something’s working! – but the drops coming out were few and far between.)

Determined to produce at least something, I tried again a few days ago and (minor) SUCCESS! 50ml of breast milk in the bag. Or bottle. I did express in the morning, and I think that made a huge difference. But still, it took a good few minutes for any milk to start coming out and I was very worried that my nipple might stretch itself to death before there was any yield! I’m still not convinced by the whole expressing malarkey, because it does seem like a bit of a faff, especially when I can be so flexible with work and have the baby with me most of the time, but it would be good to have the odd night/morning/day off. Especially as I’m planning on breastfeeding for a bit longer…

You can find the Medela Swing online here.