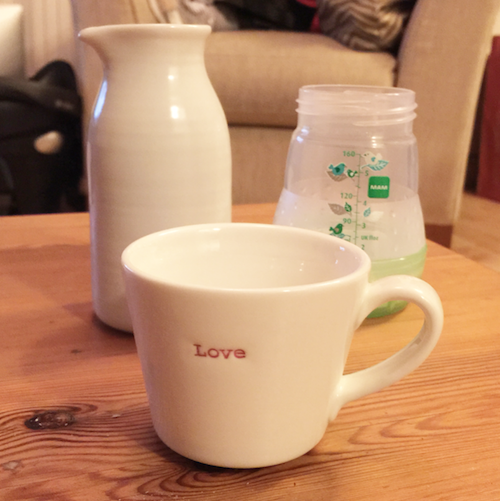 Title is pretty self-explanatory really: things hit an all-time undignified low the other day when it became necessary, due to the huge engorgement of my right breast, to milk myself into a teacup. Closing the blinds in the lounge would probably have been prudent, but my nipple was literally shooting milk in four different directions, like a faulty shower head, and so there was no time for pleasantries. I just jammed my boob into the cup and watched as the flesh deflated. I collected a quarter of a cupful without even touching the breast – it was just shooting out!

Bet you’re glad you started reading this post, aren’t you? You’ll never think of me in the same way again!

Anyway. After the cup episode, I decided to be ready with my manual breast pump for the next time. Manual not machine, to start, because I can only handle one set of instructions at a time and I haven’t read the ones for the Medela Swing pump yet. So the MAM pump, then (find it here), except that other than getting it out of the box, I didn’t prepare anything. Just left it on top of the chest of drawers to remind myself to start using it.

Yesterday morning found me waking to a completely soaked bra, pyjama top and bedsheet – a quick glance at the Human Milker, who was sleeping soundly, showed me that I wasn’t going to get any boob relief from that direction, and so it was the perfect opportunity to test out the MAM. Except that I hadn’t sterilised it. A frantic perusal of the instructions showed that I needed to do an initial boil of the equipment to kill germs, but my breast (left this time!) was leaking like a shed roof in a thunderstorm (weirdest simile of the year) and so I decided to just try it out without sterilising and chuck the milk away. Just to get things going. Otherwise I would never break the back of this expressing business…

And so nipple went into funnel and I simply squeezed the handle and….out the milk came! To be fair, it was flying out already so it’s not as though the pump had to do much, but it was definitely spurting with every squeeze of the pump. Weird side-effect: my feet kept getting wet. What is this phenomenon, I thought? And then I realised that I hadn’t screwed the bottom of the bottle on. Ha. 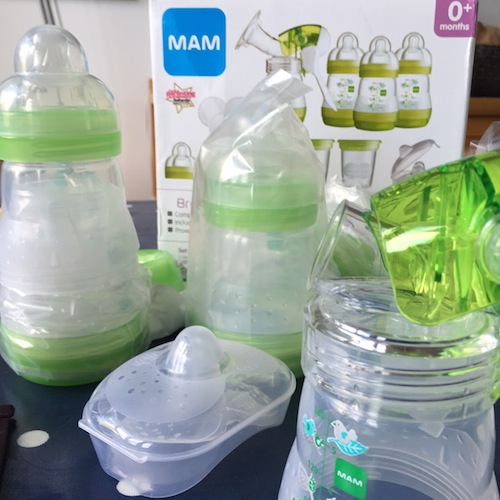 The MAM breast pump is very simple to use – just a funnel that pops into the handle part – and then a little dial that changes the suction. I found that the second lightest suction level was most comfortable – any stronger and it felt as though my nipple was going to come off. (Weird fact: the pump pulls your nipple so that it’s really long and stretching out down the funnel, it’s quite a sight!) With the lighter suction the milk flowed much more easily and after about thirty seconds the bottom of the bottle had a pleasing layer of milk slopping about. Hurrah!

So far so good, then – I think I had an easy job of it because I was merely siphoning off whatever was already making an exit, but it has boosted my confidence after a week of breastfeeding mishaps (more in a new post soon) and I feel a lot more positive about being able to express when the time comes that I really need to. If the time comes. I still think that all of this bottle lark is a right old faff!

MAM Breastfeeding Starter Kit is on Amazon here – this is an even better deal than the one I got, as it also has a microwave steriliser. £100 worth of equipment, £39.99.