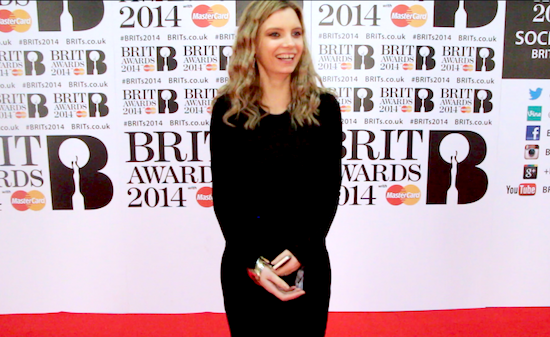 Last night I was lucky enough to attend the Brit Awards as a guest of VO5*. I had a brilliant time, as you can probably see from the photograph above! My mission at the awards was to keep an eye on the celebrity hairstyles, but I have to say that I did indulge in a few glasses of champagne at the “Diamond Table” dinner that was laid on and ended up doing far more heckling and cheering and dancing than I did hairstyle-spotting.

And so here I am, the evening after, studiously examining all of the red carpet pictures and making notes on the hairstyles (good and bad!) that appeared upon the heads of the celebrity guests and performers. You will see that my own hairstyle went very well with the “eighties” vibe that I had going on: bodycon long-sleeved dress, two-tone shoes… I haven’t had my hair crimpy-wavy like this for many, many years, let me tell you! When I was about ten I was obsessed with having crimped hair and used to beg my Mum to plait it before bed so that it would be wavy in the morning. When I was eleven, my ultimate fantasy hair happened: a friend (Rebecca Rymsza, founder of brilliant knitwear company Where’s Me Jumper) put my hair into about a hundred tiny plaits, so that I looked as though I had dreadlocks. I kept them in for weeks! You should have seen my hair when we let them out – crimp mayhem! The only problem was that my Mum made me have a bath because I hadn’t washed my hair in weeks, so in the end the crimps were short-lived. Massive effort, very little gain.

I digress: back to the Brits. I chose my style for the awards night from an illustrated moodboard that VO5 had designed. You can see it below. 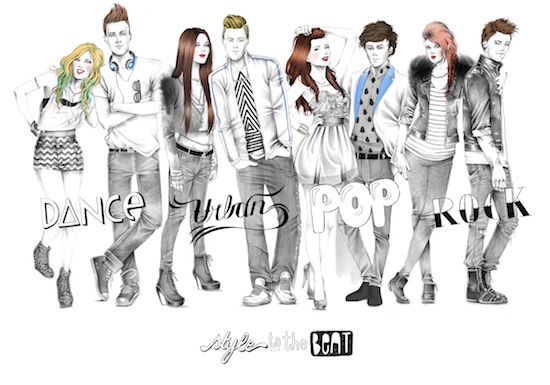 It showcases hair styles inspired by music genres, fitting in with VO5’s Style to the Beat theme. There were four styles to pick from: Dance, Urban, Pop and Rock. The Dance themed hair seemed the most appropriate for the kind of look that I wanted – textured, fun, nothing too polished or serious. 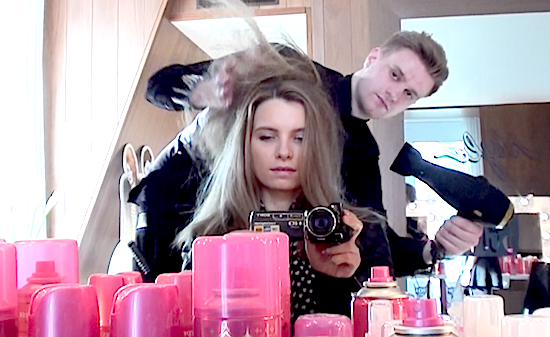 My hair was prepped with the VO5 Give Me Texture Tousled Spray and then blowdried roughly to give it lots of grip and texture. My stylist then used a waving iron- the Toni & Guy Deep Barrel Hair Waver – to crimp my hair section by section. 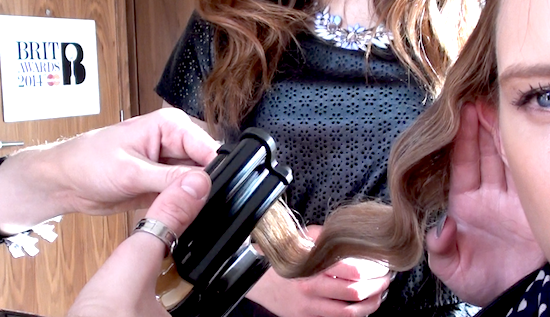 I know that he’ll be cringing at my use of the word “crimp”, but I would say that it describes the type of wave more accurately – it’s not the same rounded kind of wave that you’d get with tongs or even from using straighteners when you do that impossible twisty upside-down movement with them. (Has anyone actually successfully mastered that?) 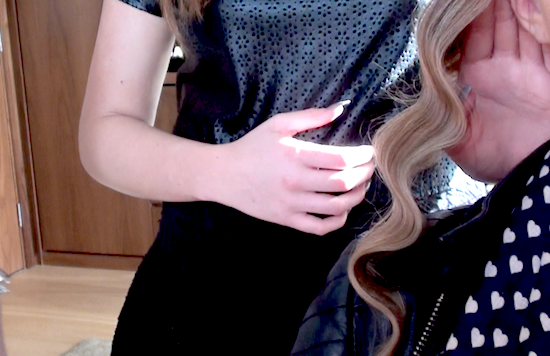 After waving every section, Ian then sprayed Plump it Up (one of my new hair discoveries, have a look here) into the roots to add even more texture and give the whole look a kind of matte effect. I was dubious about this idea but then realised that glossy waves would have looked contrived – the matte finish gave everything a really cool, modern edge. I like the fact that the waves aren’t your usual, rounded waves – they have a bit of a sharpness to them. I felt as though I was properly sporting a “do”, something a bit different. And so off I went to the O2 arena in Greenwich to meet the other VO5 guests for a “Diamond Table” dinner. I had a slight problem during dinner, one that only people who have worn a full thigh-to-chest Spanx bodysuit will be able to appreciate. (It’s hard to digest food when your body is being squeezed inside a thick tube of industrial strength elastic. It’s hard to breathe, actually, let alone eat.) 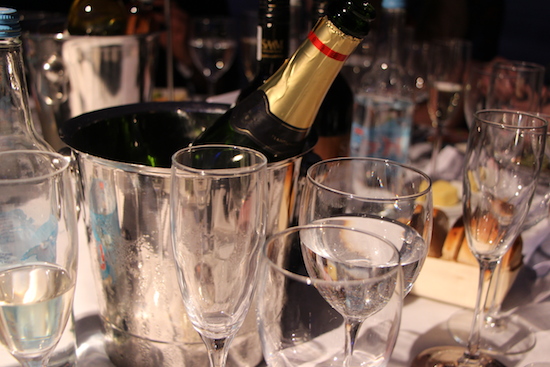 But hey-ho – I managed all three courses and a couple of glasses of champagne (would be rude not to) and then we all went through to the arena to watch the awards ceremony. This was when my celeb hairstyle-spotting work began! VO5 had asked me to keep a look out for celeb styles that matched the four Style to the Beat genres – Dance, Pop, Urban and Rock.

Rock, with its messy side-plait, was easy-peasy: 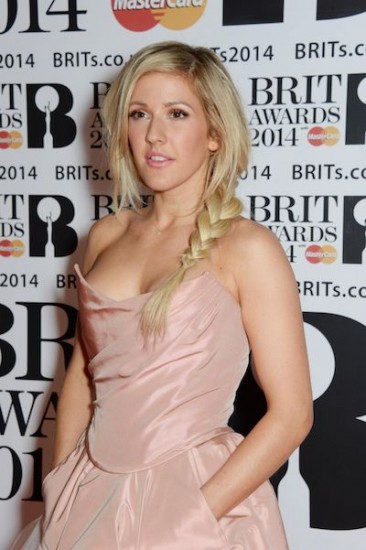 Ellie Goulding! I don’t know whether she actually went backstage to the spa area and asked for the “Rock” plait, but it’s pretty much spot-on, isn’t it? Backstage, the VO5 team were creating the “Rock” look by spraying Plump it Up backcombing spray into the roots for volume and then teasing the hair and working the product through with their fingertips, before braiding the hair messily at the side of the head. 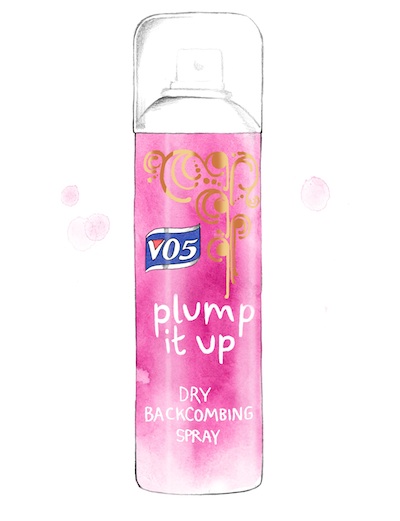 Ellie’s plait is a little more “whimsical”, I think, than the true Rock Plait, but you could easily give this more of an edge by pinning the top section up a little, into a kind of quiff. 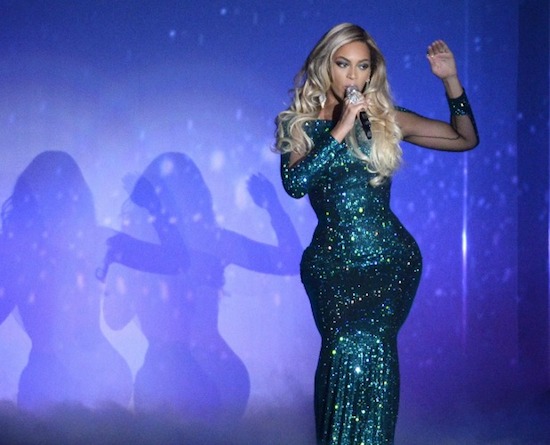 Beyonce fits the “Dance” style, I think. Cool waves with a bit of an edge. Not so crimpy as mine, but you can’t have everything, can you, B? Don’t worry, I’ll lend you my crimpers next time! Check out that dress, though – she’s just on an entirely different level, is Beyonce. 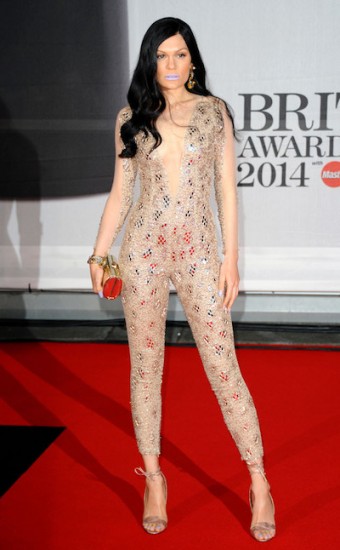 Jessie J, being all “Urban”. I know there’s a wave in there, but it’s otherwise so sleek and shiny. And JJ really is the archetypal “Urban Hair” girl – all of those super-straight bobs that she goes for and mirror-shine Cleopatra fringes. Can we just have a little pause, though, and take a long look at the catsuit ensemble? I mean really! I just don’t know where to start with this. Sometimes I wonder why I worry so much about what to wear before an event – you just have to flick through some celebrity red carpet images to give yourself the boost you need to get out of the door! I’m all for being adventurous, but this catsuit thing just seems… a bit smelly. It’s like old lady knicker material made into a garment – it’s a bit like a corpse in some kind of tight-fitting bejewelled shroud. And the blue lipstick doesn’t help… I want to love it for the sheer daringness, if in fact that is a word, but I can’t bring myself to a point of true acceptance. This is coming from a girl who once wore a skirt that didn’t cover the bottom of her bottom, by the way – ask my Mum – but at least it was made from actual fabric and not a decoupaged thrombosis stocking. 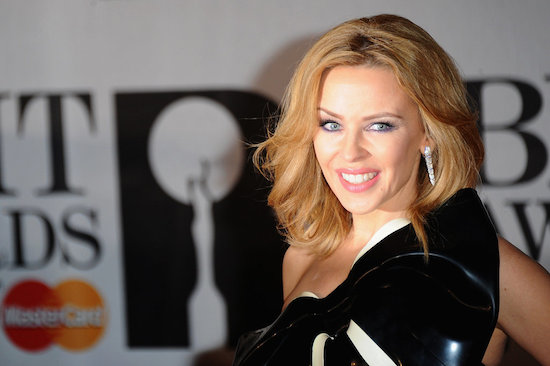 Here’s Kylie – the true “Pop” lady. The tiniest little lady in the world, when she was up there on the stage. You just wanted to reach down and lay your hand flat so that she could hop up into your palm like Tinkerbell. Kylie has the classic “Pop” hair – glam waves that are just on the cool side of “polished”. Slightly undone and dishevelled and with just enough shine to give it that Famous Person Finish. To create the Pop look on visitors to the backstage spa, the VO5 team sprayed Smoothly Does It Tame & Shine Spray over loosely pulled-out waves – probably the simplest of the styles, really, and the easiest to maintain throughout the night. It’s the kind of look that gets better with age, I think – the waves get more tousled and sexy as the night goes on!

Queens of the tousled hair were probably Kate Moss and Rosie Huntington-Whitely; seemingly carefree styles that probably took hours to get right but look as though the girls have just hopped out of bed and rocked up to the stage. Ugh. True “natural” hair is one of the most difficult things to get right, in my experience. As soon as I start clarting about with a hair dryer, I know I’m done for. Everything goes crazy and coarse and then I start panicking that I’m running late, so I stick my head upside down to get “volume” and end up with hair like one of those plastic trolls! But sit me in the stylist’s chair on a shoot and they’ll pile in a load of product, do loads of twisting and pulling with their fingers, waft the dryer about for half an hour and hey presto! Amazing hair that’s just the right amount of shiny, just the right amount of dishevelled. “Piecey” but not greasy-looking, softly waved but not kinked with any discernible curl.

Which would your ideal style be? I was supposed to ask you, before I went to the Brits, to tell me which style I should have gone for – what would you have said? Let me know.

(I wore a dress by Alexander Wang that I bought in the Net-a-Porter sale, some bangles by House of Harlow, my Whistles leather jacket and my Jennie shoes from LK Bennett. I’m planning an outfit and makeup video so I’ll let you know when that goes up!)

*My night at the Brits and associated features have been sponsored by VO5.