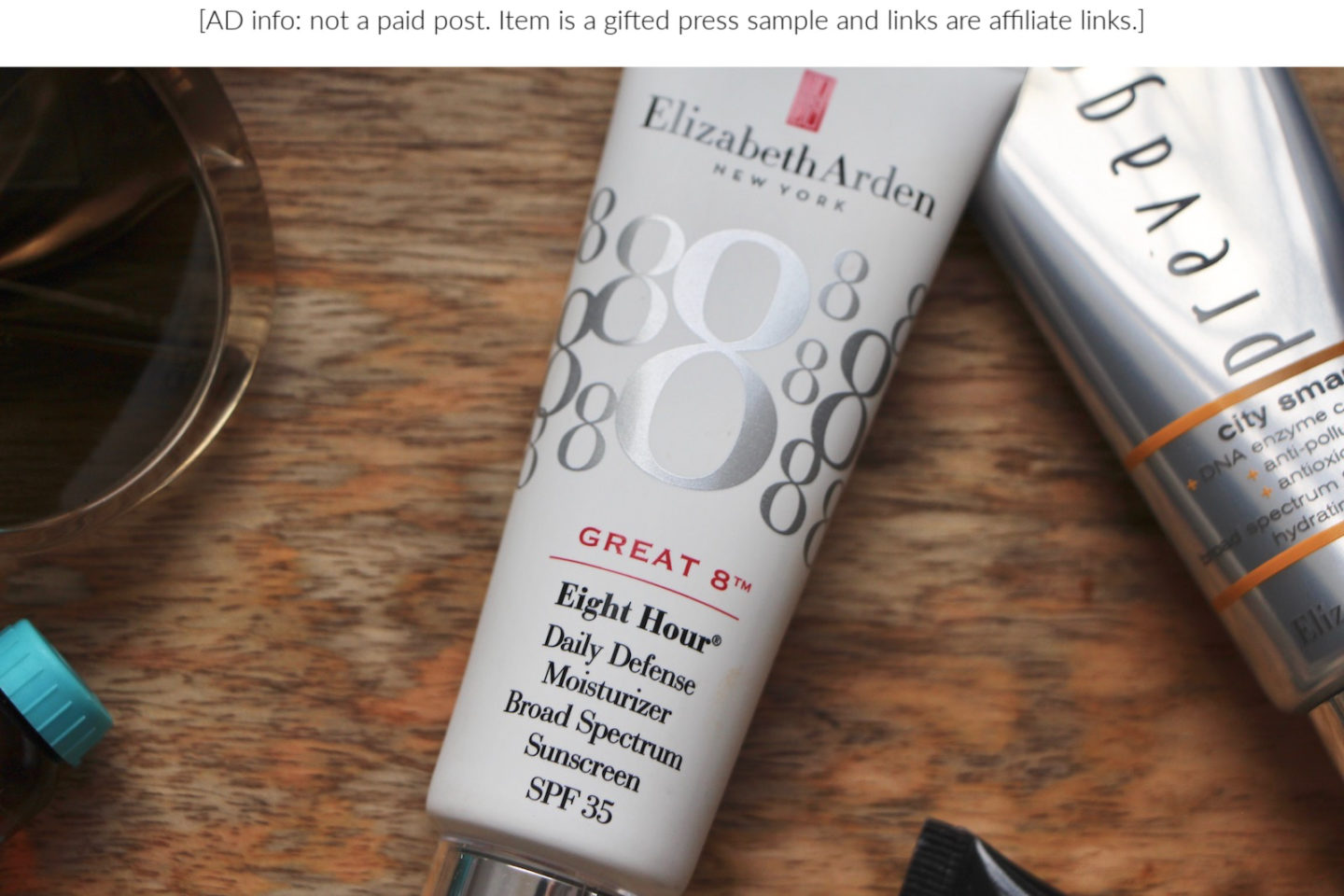 I’m supposed to be concentrating on getting my app launched (The Night Feed, it’s almost finished!) but I couldn’t let a quick review of this new SPF from Elizabeth Arden slip through the net. Because Great 8 Eight Hour Daily Defense Moisturiser SPF35 is absurdly nice. Incredibly light and fresh, quick to absorb, but surprisingly hydrating, I can’t think of anything not to like about it, unless the (very subtle) fragrance isn’t something you could tolerate.

Great 8 Eight Hour Daily Defense Moisturiser SPF35 – or “Great 8”, as it shall henceforth be known, so that I don’t get RSI from typing – is the latest sunscreen to join Elizabeth Arden’s little SPF family. They already have a couple of quite robust moisturisers with broad spectrum protection on the go – the Eight Hour Cream SPF50, for example, which has a rich and luxurious texture – but nothing as beautifully fresh and invisible as their new launch. 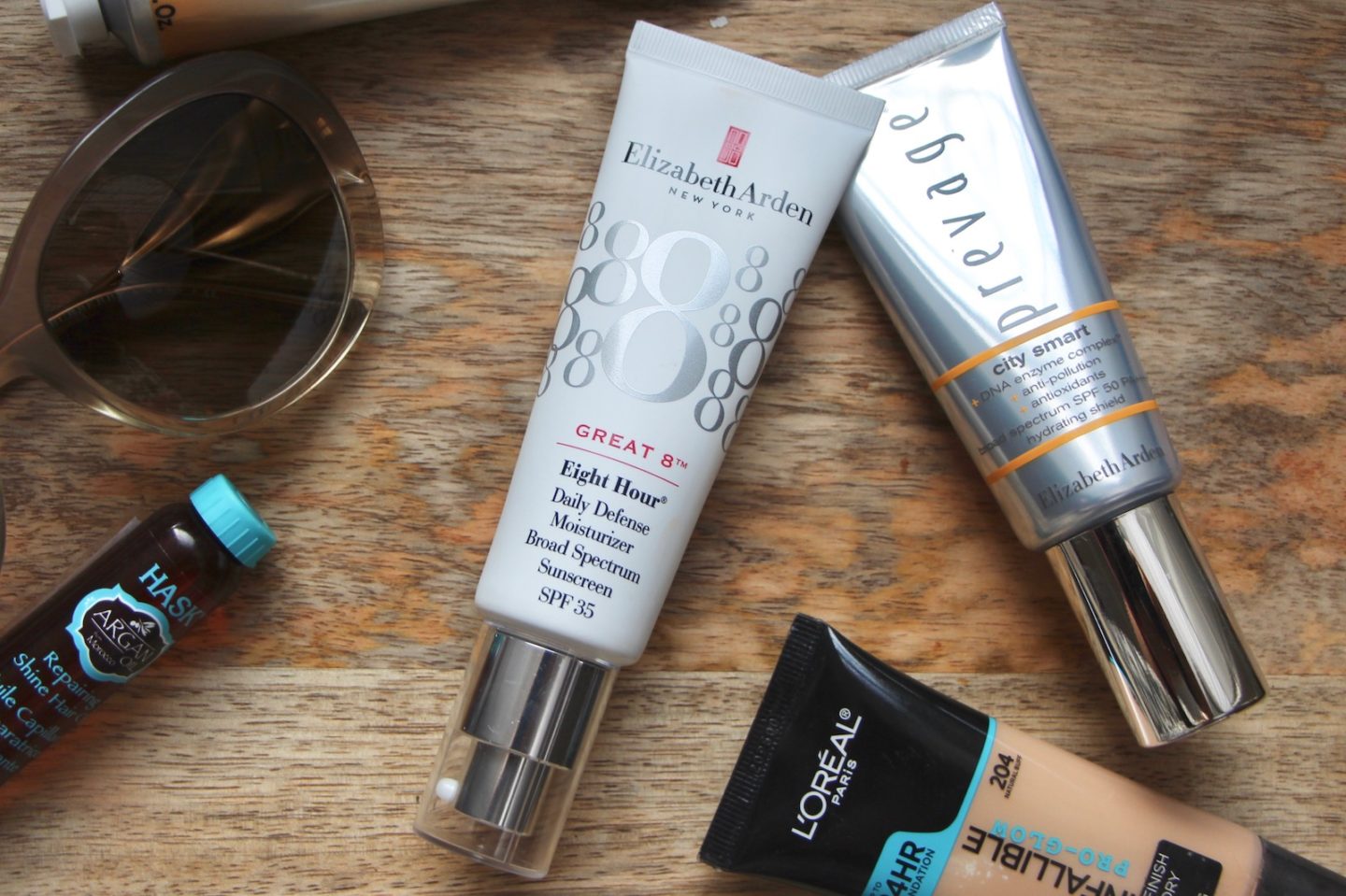 Funnily enough, one of my posts that has been sat in the drafts folder for a couple of weeks was a review of Elizabeth Arden’s Prevage City Smart SPF50, a sunscreen that’s so moisturising you can still feel the effects at the very end of the day, but the new Great 8 has impressed me so much that it’s jumped the queue.

The City Smart has a higher SPF (SPF50 in comparison to Great 8’s SPF35) and the sort of long-lasting moisturising effect that dry skins dream of, but the new Great 8 is just so easy. So wearable. I can think of very few sunscreens that would rival this one in terms of feel and finish. It’s a gel but it’s not drying, it’s refreshing but doesn’t leave the skin tight. It just feels as though you have nothing on.

But you do have something on, obviously. You’re wearing broad spectrum sunscreen, a very decent makeup primer and a brilliantly hydrating moisturiser that helps to control excess oil production as well as protect against free radical damage and the effects of blue and infrared light. Multi-tasking at its very best.

(I always feel a bit silly talking about blue light and infrared when I write about sunscreens; it makes it sound as though we’re all standing about in physics labs having various beams of light shot at us. Like we’re partaking in an A-level science experiment. Sorry to be dense – and do comment below with answers – but when are we exposed to infrared light in normal life? Isn’t that what they use in night-vision goggles? Is someone standing over me when I sleep, watching me through their night-vision camera? That would be rather terrifying. UPDATE: apparently we get IR from the sun, too, so there’s me feeling stupid. Thank God I spent all that time doing science exams – fat lot of good that did me!)

Very dry skin will probably still prefer Arden’s City Smart over the new launch, but for everyone else, Great 8 brings a very lovely summer skincare offering to the table. It’s a breath of fresh air after some of the thicker creams I’ve been testing recently; no matter how refined a formulation is, I still often get the sensation on my face that I’ve been coated with a thin layer of liquid chalk. And that I really, really want to scrub at my face with a loofah. (Don’t try that.) With Great 8, I just apply and forget that it’s even on. Which is surely the best result? Now they just need to make it in an SPF50 too…

I should probably give a special shout-out for those who have oilier skin and struggle with sunscreen; if I often feel like loofah-ing my face off when I wear certain SPFs then it must be a hell of a lot worse for you. Well, this Great 8 gel might just be your thing; it has a slightly matte finish but none of the dullness, oil control but an extra boost of hydration and that hallowed lightweight texture we (mostly) all crave but without the stickiness or tackiness. Great 8 works hard to keep things balanced yet still manages to feel luxurious and silky-smooth.

In short: those looking for an everyday moisturiser with sunscreen, who want something they can barely feel, who require hydration but hate oiliness, who would quite like a product that sits well beneath makeup, who would rejoice at a fresh, cooling texture that feels soothing on a summer’s day…look no further.

More sunscreen recommendations here, but of particular note: Anthelios is great for oilier skin and is really well-priced, Murad make this disturbingly good, completely invisible SPF30* that seems to have no discernible texture and if you’re after a (mostly) organic product, then I really rate the Coola Classic Cucumber SPF30 for face. I used it a lot last year and it’s fresh and light – rather like Great 8! – with a non-greasy finish and a subtle scent. You can find it at Cult Beauty here*, it’s £30.