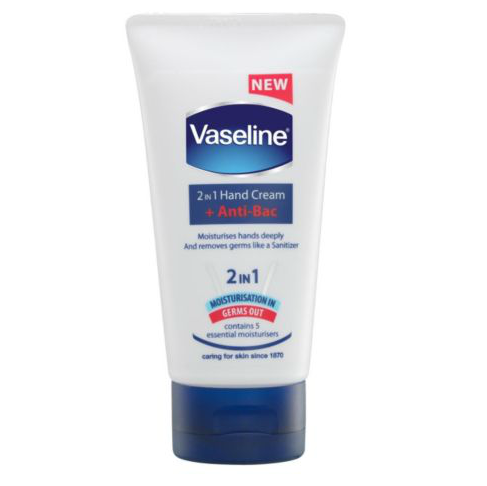 So what do we think of this then? Vaseline have launched (ages ago now, actually, but I forgot about it)  a hand cream with added sanitising germ protection. Clever, but I have to say that I thought of this idea years ago, so that makes me cleverer! (Haha.) Seriously, about seven years ago I went to a focus group for a beauty brand and they wanted to know what was missing from the beauty world – I said a moisturising hand sanitiser! I have no idea whether or not the client was Vaseline, but if it was – I WANT 20%!

I jest of course. A moisturising sanitiser has been on the cards since we all started using sanitisers, which was when they told us all we were going to be wiped out by swine flu within the week. Here we still are, though – thank GOD for sanitiser, eh? Personally I hate the stuff – it shrivels my hands up into hard pieces of wood the second it goes on – but there are a few good versions. (See Hand Sanitiser Reviews)

So have Vaseline answered the prayers of the dry-handed nation? I think that they’ve had a pretty good go. It’s not the most moisturising hand cream I’ve had the pleasure of using, but it’s by no means the worst. I’d rather call it a moisturising hand sanitiser, though, than a sanitising hand cream. My hands don’t feel that different after use, but I suppose it’s the “Bacteria tested showed 99.9% reduction within 15 seconds” stat that I should be concentrating on. Quite impressive – it pretty much blasts the hell out of those germs, doesn’t it? They don’t stand a chance! There’s no greasy or sticky residue and it’s alcohol free. For those habitual hand sanitisers, this could be a bit of a find.