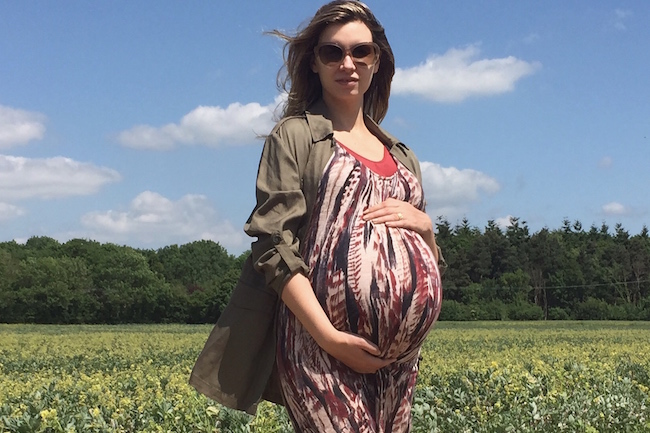 I’ve been trying to write this “fertility journey” post for nearly a year, now, but had various hangups and issues about how much of my private life I really wanted to reveal and kept putting it off. However, I feel that it’s important to get it out there before I deliver my baby (due date is Monday); firstly because I feel that the person I’m going to talk about has had such an impact on my health – and therefore, as I’ll explain, my fertility – and secondly because it feels like quite a fitting way to round off my pregnancy, which has honestly been the most joyful and wonderful period of my life so far. Thirdly, and probably most importantly, I have had dozens and dozens of emails and comments from women who are struggling to conceive and I feel that it would be helpful to share my story. Please be aware that I’m not suggesting some kind of magical solution, here; but I feel that it’s an optimistic and positive end to what was quite a hard and stressful time.

I first met John Tsagaris at a dinner and, after I’d had a couple of glasses of red wine, I found myself pouring out all of my troubles to him, explaining that I had been trying to get pregnant for years (it was about five and a half at that point) and that I’d only managed one, sadly unsuccessful pregnancy. I hadn’t really been open to trying alternative medicines or remedies before – even though my GP (who was amazing, a real gem who was always trying to get me to de-stress and do yoga and meditate) had suggested it numerous times. But having had all possible fertility tests, with nothing showing up as even remotely abnormal or worrisome, I was at a total loss. Depressed, feeling hopeless and bitter and not at all good about life.

John explained that he was a practitioner of Chinese Medicine and that, through the use of acupuncture and specially prescribed herbs, he thought that he could help me get my health back on track. (Or words to that effect – this was over a year ago now!) “My health back on track?” I thought. “There’s nothing wrong with my health, the tests have shown that. And hospital tests don’t lie!” To be quite honest, I was extremely sceptical about the whole thing. I couldn’t see how John could change anything about my health or fertility, and friends and family were divided in their opinions, with some vehemently positive about the brilliant results that could be had, and others dismissing it all as “mumbo jumbo”. (Interestingly, the ones who dismissed it had never tried it.)

More pregnancy and fertility posts on The Uphill…

Anyway, off I went for a free session offered by John’s PR, still feeling sceptical. When I arrived, John very calmly and quietly asked me dozens and dozens of questions about my wellbeing. How was my skin? My digestion? Did I get cold easily, or feel jittery or nervous a lot? Did my nails break or were they strong? How were my periods – regular? Heavy? Accompanied by pain, headaches, breast pain, mood swings? By the end of the questioning (and after John had felt my pulse and looked at my tongue) I was still as unconvinced as I had been at the dinner. Anyone can ask questions, I thought.

But then came the epiphany; and this change in my thinking has completely altered the way that I look at health and wellbeing. John pointed out to me that my health wasn’t actually that great and that my periods weren’t optimum, my hormones weren’t as they should be. My digestion was all over the place, my periods were regular-ish but they were scant, almost to the point of non-existence, with a weird two-day gap in the middle before they dwindled down to nothing. I had sores on my tongue, I had headaches, brittle nails, I was jittery and stressed. And do you know what? Until I sat down and answered all of John’s detailed questions, I hadn’t really taken notice of any of these things. As far as I was concerned, the NHS had done their tests and I was the picture of health – just with unexplained infertility.

Now this is most certainly not a criticism of the NHS – GPs and hospitals simply do not have the time to sit with every patient for forty-five minutes and ask them dozens of questions. They need to find out what’s wrong and then fix it – there are no real “health MOTs” on offer. But John managed to find out in a forty-five minute interview more than the consultants at the hospital ever did over the many appointments that I had in the fertility unit. And he didn’t offer me any magic fixes, not by any means, but again, what he said to me has altered the whole way that I think about my body and my health: “how can you support a pregnancy,” he said, “if your body can’t even support itself?”

(I’m sorry to those who are scoffing at all of this; please don’t read any further if that’s you. I do appreciate all comments and feedback, but this is such a sensitive subject and I saw very real results (one of them is currently residing in my large, pregnant stomach) and I’d like to feel as though I can be as open and honest as possible without being mocked or challenged. So do feel free to skip a page and read a beauty or travel review!)

I began a course of treatment with John at the John Tsagaris Clinic (as a paying customer, I should add, in the interests of transparency) to try and improve my overall health – stress levels, periods and digestion. With each session, I had an initial interview to assess progress and alter my herbal prescription and then a lovely half an hour (or more) on the couch having acupuncture. I didn’t ever get that “wave of euphoria” or emotional surge and so I did worry that it wasn’t working at first, but even after just two sessions (one a month) I began to see amazing changes.

Firstly in my digestion – I had always been doughy and sensitive in the stomach, with frequent bouts of this and that (let’s not go into it) and the most insane bloating after random foods that seemed to change each and every time I ate.  After a couple of months, I was the least bloated I’d ever been. Even foods like pasta were having far less effect on my stomach than they would usually and my whole system just seemed to be working properly for the first time in years.

Then, after four or five months, my scant, irregular periods (which the consultants at the hospital said bore no relation to my unexplained fertility) were appearing on every 29th day. On the dot. Whereas previously they had lasted for just two days, then a two day gap before a dwindling, pathetic day or so, they were lasting for a full four days, no gap. Normal, not scant. These were real, tangible results and I was seriously blown away.

I’m wary of holding John up as some kind of miracle-worker and sensationalising my story (as I said at the start of this post, I’m not offering a solution but sharing my own personal experience) but what happened next can’t be ignored or dismissed: I fell pregnant. Of course it could have been “the right time”, or “fate” or what have you, but is it not too much of a coincidence that after six or seven months of treatment, my health was so glowing and my system working so nicely that it just provided the right conditions for a pregnancy? I remember the very week I conceived: I was in Greece and I held my hands up to Mr AMR and made him examine my fingernails. They were the longest and strongest that they had ever been. I felt bursting with health – I was a good few pounds heavier than my standard weight (again, no change in diet, it just seemed to be one of the effects of the herbs and/or acupuncture) and I felt amazing. I found out about Baby AMR a couple of weeks later.

I honestly feel as though I can’t thank John enough. He took the time to look at my overall health and he gave me real confidence in my body and made me believe in its abilities. Even if I reverted back to my former scepticism, dismissing the acupuncture and herbs as complete rubbish, I think that the positive mental and emotional changes that John encouraged have been the most valuable lessons I’ve ever learnt. Adopting a different approach to my wellbeing made me realise that although on paper my fertility was “perfect”, the reality was that my health was far from it. I haven’t had any sessions at the clinic since falling pregnant – John was moving locations and he’s also a very in-demand man, and on top of that I have barely been into London what with my house-moving – but I shall be back like a flash once I can get a bit of time to myself. My time with John has truly been the best investment I’ve ever made.