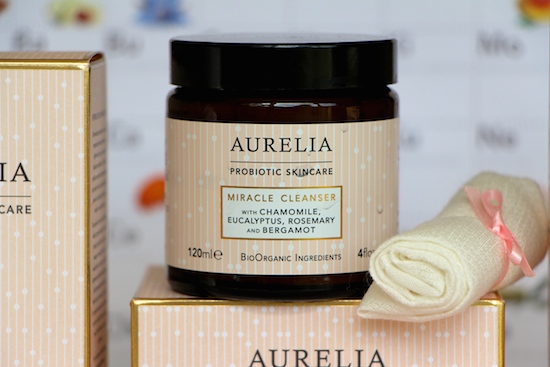 A lovely cleanser to add to your wishlist; Aurelia’s Miracle Cleanser. I am new to Aurelia, and I’m afraid I’ll have to do a bit of swotting up before I can even begin to tell you about “probiotic skincare” or “bioorganic ingredients”, but this cleanser impressed me immediately. It’s creamy and rich but still easy to remove and it doesn’t leave an oily residue behind after you’ve done your little flannel/washcloth routine.

I found this to be quite a powerful little product, really – I was surprised, because the packaging looks so pretty-pretty. I was expecting some kind of rose-scented number that would give a gentle, quiet kind of cleanse, but instead I opened the jar and was hit with the full-on smell of eucalyptus and rosemary! I can imagine that this would be off-putting for many; I don’t mind it. The smell reminds me a little bit of Liz Earle’s Cleanse and Polish, though the texture isn’t at all the same. Aurelia’s Miracle Cleanser is a soft cream – so soft that you think it might wash away too easily and be a bit flimsy. But it’s not flimsy in the slightest; you can get a good bit of massaging-in going on and I actually like to leave it on for a minute or so before removing, just to let it sit and stew. 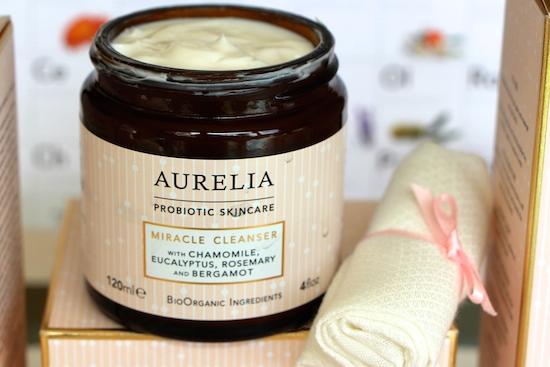 For people who don’t like the oily texture of balm cleansers, the more creamy formulas are a really nice option*. I already love the Frankincense Cleanser from Neal’s Yard Remedies (one tube finished, another just opened!) and also Pai’s cleanser, which is a calming rose one. You can read more cleanser reviews if you click here – most cream or balm cleansers that I’ve written about will be suitable for all skin types, though I would test this Aurelia one first if you have very sensitive skin. As I said: it packs a punch. It doesn’t leave your skin feeling at all dry or stripped, it’s just that it seems to do a very good job of getting rid of the grime and it’s quite loaded up with essential oils which can be a bit much for some skins… Other than that, it’s light enough for oily and combination skin but rich enough to keep drier skin feeling moisturised and there’s none of that post-cleanse tightness that some products create.

Miracle cleanser? I’m always wary of the word “miracle” used on beauty products – it does tend to get thrown around in a carefree manner – and I can’t see what would justify its use here, either. It’s a very good cleanser, but I would have thought that you’d save the “miracle” label for some kind of resurfacing serum or plumping moisturiser – something that shows instant, remarkable results. There’s nothing miraculous about cleaning your face! On the other hand, I do like the mystery and intrigue that surrounds the word “miracle” – especially when it’s printed on a very lovely label on a dark-glass apothecary-style pot. I suppose it’s a bit like Charlotte Tilbury and her Magic Cream – Magic is a bit overblown as a description, but there’s something about it that makes you want to open that lid and see what’s inside…

Aurelia’s Miracle Cleanser is £34 from Net-a-Porter here or from Space NK**. I’ll be back soon with more info on Aurelia – I’ve also been testing a teeny bottle of their serum and the stuff is like skin dynamite!

*A very nice, very affordable cream cleanser (though the Neal’s Yard one is pretty well-priced!) is the Rose one from Una Brennan. You can see my write-up on that here.

**SpaceNK have their sale on at the moment and I spotted the amazing Laura Mercier Creme Brulee and Almond Coconut sets at half price! They are reduced from £60 to £30 here.