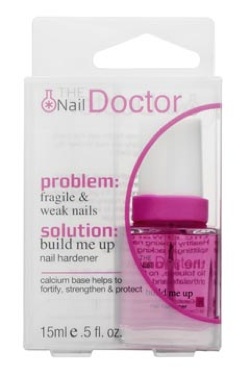 I was wondering this week whether or not anyone ever goes to the doctor about their nails. As in, ‘Doctor, Doctor; I think I’ve broken a nail! And I’ve chipped my Chanel – it was Paradoxal!’

I’d like to see someone try that on with my Doctor – bloody hell, she’d throw them out of the window. She has a strict six minute policy, even, I can imagine, if she is diagnosing a terminal illness. I once went in to see her with two separate problems, and whilst I was explaining this, she held up her hand to stop me and said, “decide which is the most life-threatening of the two, and then make another appointment for the other one.” Ha!

For the last couple of weeks, I’ve been using The Nail Doctor’s ‘Build Me Up’ Nail Hardener in an attempt to stop me from picking at the flakey bits and ripping bits off when they get a bit too long. The reason, by the way, that I think that I’ve even been getting flakey bits is that I stopped taking my Sainsbury’s ‘Revive!’ fizzy tablets! I ran out, and my nails went to pot – coincidence, no?

Anyway. Nail Hardener. It’s jolly good stuff – you just paint it on as a base coat and it dries really really fast and then that’s it. I wish all treatments were that fast – dentistry, for example, could take a leaf out of The Nail Doctor’s book. A filling in four seconds would be good – just paint it on with a brush, and leave mouth open to dry. I’m being silly, of course, but my point is that this is a very simple way to improve the appearance of your nails quite quickly. And if you don’t want to wear polish over the top, then don’t – the treatment leaves a slightly shiny finish anyway that looks quite groomed.

There’s another treatment in the range, and that’s ‘Rescue Me’ – a 10 day nail strengthening system. Like the hardener, this is toluene, formaldehyde and dibutyl phthalate free, and promises to fix thinning, peeling and splitting nails. There’s a base coat and a top coat, and if you’re a regular polish wearer, then this could be a good addition to your nail ‘routine’ to protect your nails and keep them looking great!