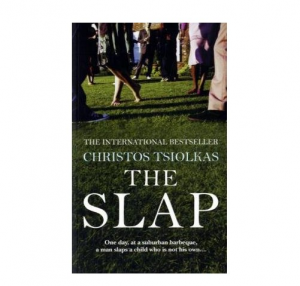 Interesting, I think, that ‘The Slap’ has been adapted for television. It will be aired in a ten-part series from this Thursday on BBC4. If you’ve read ‘The Slap’, you’ll know that the subject matter is quite uneasy; a man slaps a misbehaving child (not his own, not that it should make a difference) at an afternoon barbeque, and a whole narrative unwinds from there. It’s set in Melbourne, Australia, and there are plenty of references to local culture and wider statements about Australian life and attitudes.

It’s not the actual ‘slap’ itself that bothers me about this book (it’s fiction, after all, and we read books about murders and child-molesters alongside books about orks and demons without any particular sense of unease) it’s the fact that I really didn’t like the book itself. Sure, you’ve got a nice controversial theme going on, but the fact is that none of the characters in the novel are remotely likeable. I didn’t feel any sympathy for them whatsoever, and some of them were downright clichés! That said, I did finish it and it gave me plenty of food for thought, both about some of the issues raised and the way in which Tsiolkas writes.

I’m really intrigued to see how the Australian TV producers have handled this, so roll on Thursday. If you want to quickly have a stab at the book before the TV series begins, then it’s here: The Slap at Amazon

Let me know what you think of it!