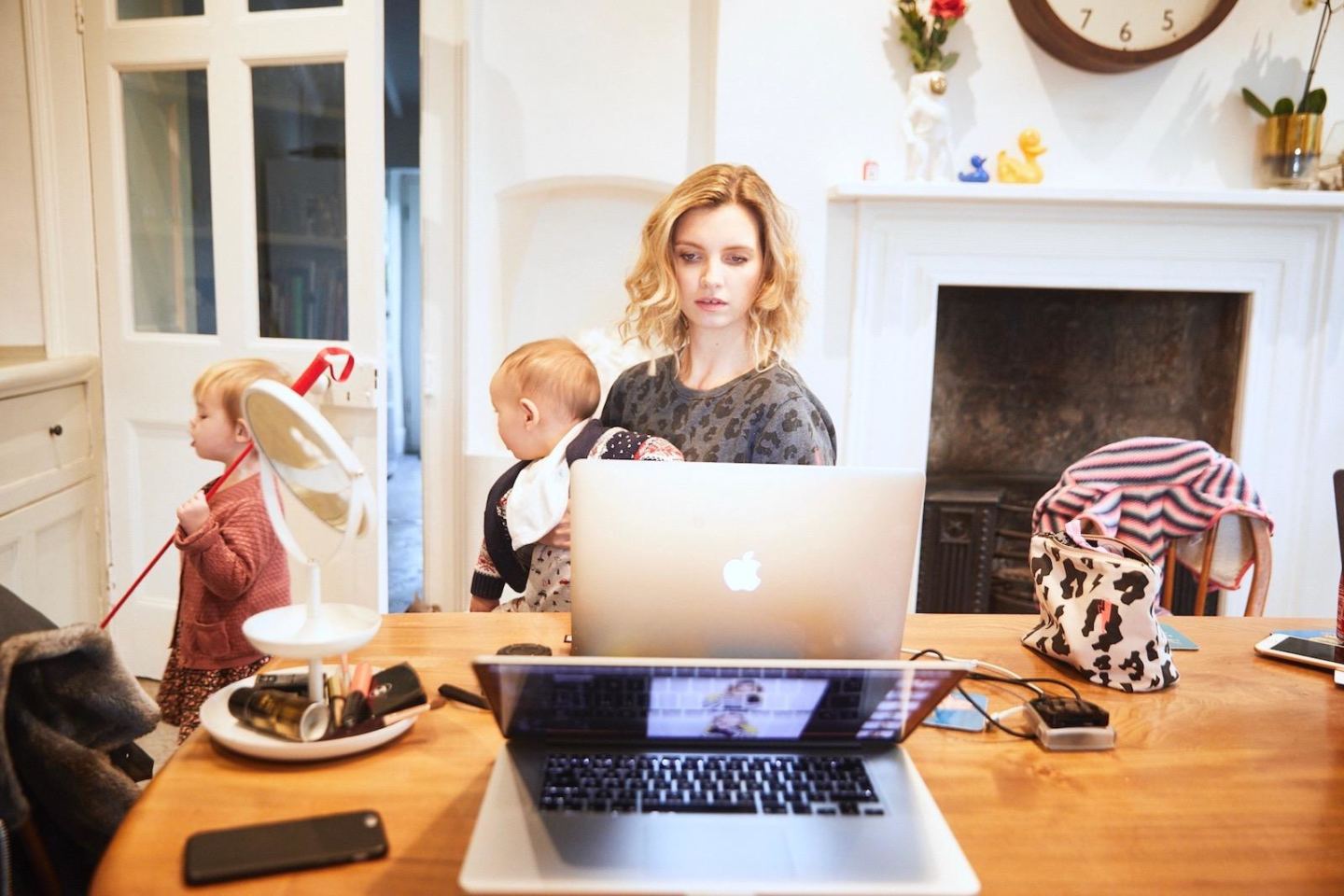 I’ve banged on about this countless times on various social media platforms, but the months at the end of 2017 were absolute chaos for me. We relocated to Somerset, moving house twice, Baby Ted wasn’t sleeping and my work life ground to a halt.

In actual fact it didn’t grind to a halt; I continued at almost full pace until a few days before Christmas, but then decided to calm it down for a few weeks because I simply couldn’t do everything I needed to do. But it felt as though things ground to a halt. And I was weepy, felt poorly, felt constantly guilty or useless; the house was filled with boxes, it wouldn’t stop raining and generally being cold and miserable and the world felt completely out of my grasp. 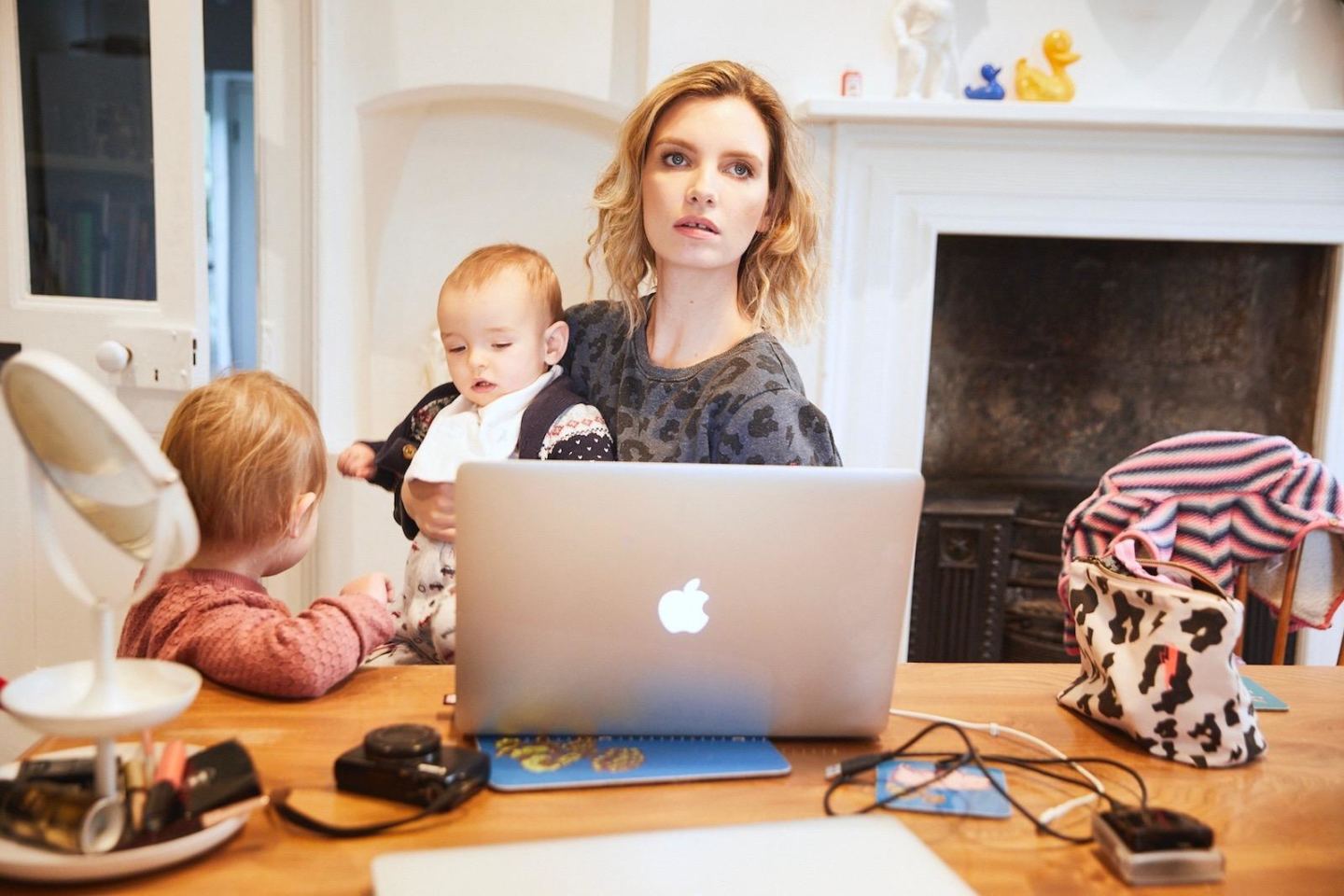 But I made three key changes – which were actually quite difficult or time-consuming, in their various ways – and, just like that, order was re-established. Pockets of time fell into my lap as though by magic; nights of (mostly) uninterrupted sleep left me feeling twenty years younger. I began to have an interest in socialising again, in eating more healthily (though this is currently on a backburner due to my ongoing Mint Choc Magnum addiction) and in working in a more fruitful and rewarding way, rather than just panicking to get things done.

Here are the changes that put my life back on an even keel. They seem obvious, but I’m going to write about them nevertheless!

If you have to work, or want to work, and you need to do this from home then I’d say that it’s almost essential – both for productivity and your own sanity – to get some form of childcare going. We had a wonderful nanny for Angelica from when she turned one until when we left our old house. We had her for two days a week and it gave me quite a substantial block of time in which to get my work done. (I mean, not enough time, but this is the kind of job that could take up as much time as you can throw at it. I used to, pre-babies, post every day on my beauty website and produced two videos a week as well as creating brand content. Had there been more hours in the day, I would have soaked them up into my work life too. I was insatiable! But there has to be a limit, doesn’t there?)

Anyway, I think that having proper childcare where you don’t have to engage with your children at all and can completely immerse yourself in work is essential if you work from home. I quickly found, sans-nanny, that I was just panic working whenever I possibly could and it wasn’t good for me or for the rest of the family. With a nanny, I can work relentlessly all day without interruption (or work for half of the day and use the other half to sleep and browse stupid things on Youtube. Do NOT tell anyone that) and for that time, at least, I feel on top of things. And the childcare doesn’t have to be in the form of a nanny – I have one because I like that the babies are still at home and I can vaguely hear their chattering through the floors! – it might work better if they are at a nursery and you have a completely empty house. Whatever floats your boat. 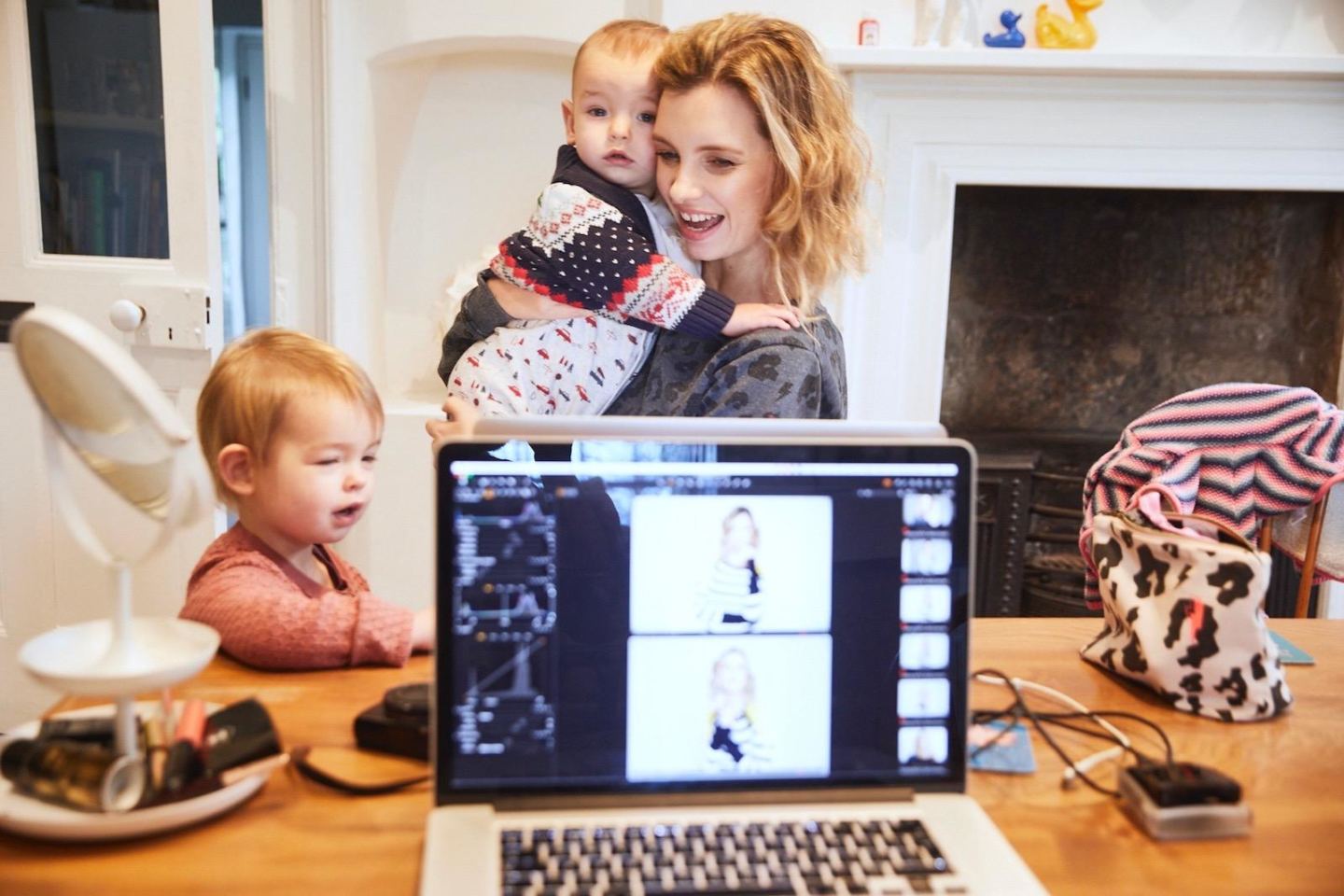 It’s a bit of a step, a bit of a wrench if you’ve never let your cherub/s out of your sight before, but it’s so, so worthwhile if you feel as though you’re drowning in guilt every time you open your laptop, or if you have a burning determination to do something amazingly entrepreneurial but can’t summon up the energy in the evenings, after bathtime and protracted bedtime story sessions have been completed. I’d hazard a guess that finding a nanny is more time-consuming than finding a nursery – it seems pretty easy to book in a viewing at a nursery, though many have waiting lists – but if you use an agency (I used one called Tinies, twice) then a lot of the hard work is done for you. It’s more expensive, but usually the nannies have already been sussed out for their qualifications and certificates and a good agency will whittle down a list to the ones that are really most suitable for you. If anyone’s interested I can do a separate post on nanny-finding and some of the pitfalls – let me know.

But on to the second (hugely rewarding!) change I made, which was…

I’ve written at length about our sleep problems – you can read the main posts using the links here:

How I’m Getting My Baby To Sleep Through The Night

It took us being absolutely driven into the ground with tiredness for us to make definitive, positive steps towards getting Baby Ted to sleep through the night, and I think you know when you’ve reached that point. Probably the trick is to start addressing sleep problems before you get to that stage – I mentioned in one post how so many of us are too tired to take a step back from our situation and realise how utterly absurd it is, how crazy the habits are that we’re allowing to form. If you’re knackered and you have an older baby that doesn’t sleep, I’d urge you to take a pencil and piece of paper and (now!) write down a few sentences about what happens during the night. Summarise it for yourself. Sometimes reading something in black and white can give you the nudge you need to make changes or identify what it is that is so glaringly wrong.

I met a wonderful woman the other week who specialises in sleep problems – I’m going to try and nab her to answer a few important baby sleep questions, so if you’re interested in asking anything, leave a comment below!

Anyway, getting some sleep has completely changed our family life around. I no longer want to kill my husband, which has to be a good thing, and he no longer looks at me with the same worn, empty expression he had been using for quite some time. We were like zombies. I felt as though I had lost all grasp on reality. Sleep deprivation is monstrous – recognise it, address it, don’t let it carry on without at least trying to fix it. 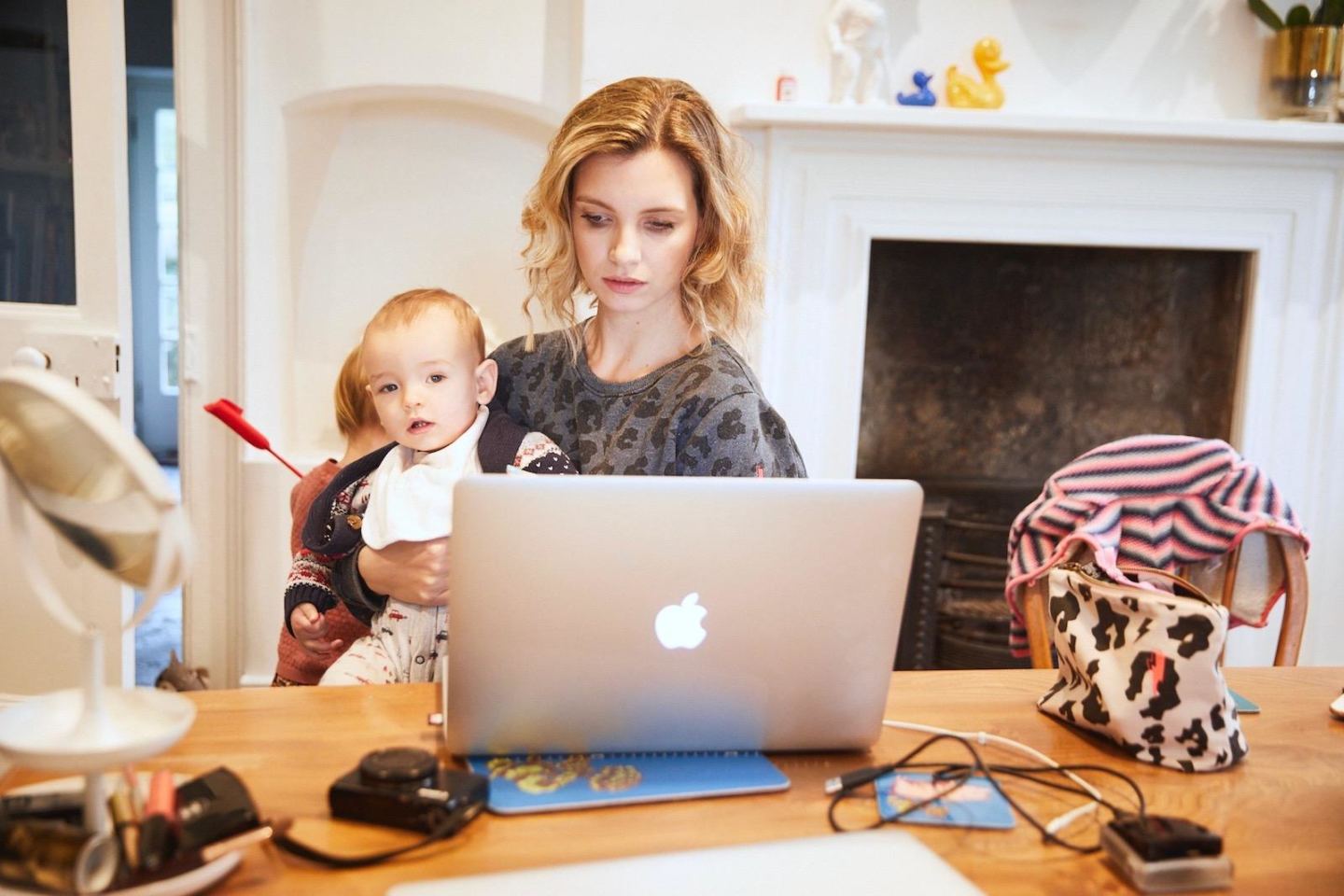 Easing Up On iPhone Usage

I am going to write far more about this, because it’s a hot topic at the moment, but I’ve really eased up on my iPhone usage. It was almost an addiction. And most of the time, when I was scrolling through Instagram or reading someone’s comment thread on Twitter, it was completely and utterly pointless. Hours and hours lost to the black hole of social media – not the useful news and information social media, or the nice catching-up-with-friends social media, but the sort of social media that sees you trawling through the wedding photos of a person you have never met but that popped up on the Instagram home page. Or following a trail of usernames through Twitter to see why such-and-such left an aggressive comment on so-and-so’s blog post that was published back in 2014 but may have contained a sentence that dissed such-and-such’s makeup range. Good God, stop it. It’s worse than watching daytime TV.

I read a really good article by Sali Hughes on The Pool (here) about breaking up with your phone. I then bought the book she recommended* and re-organised my iPhone apps so that my most-used time-wasters weren’t immediately accessible. I then turned off my email notifications so that I wouldn’t get the little red number flag popping up on my home screen every time I had a new email (which is approximately once every ten seconds and I’m not even joking) and all of these things, done together, have cut my iPhone usage by around half. Perhaps more. I’ve stopped idly scrolling when I should be pretending to be an evil wizard with Angelica, and when I watch TV in the evenings I do so with all of my attention rather than a quarter of it. (The other three quarters concentrating on Instagram Stories, which I find absolutely riveting.)

So three steps to re-ordering my chaotic life – freeing up time, regaining my sanity and developing good habits. What would you say have been your own biggest changes when life has become too crazy to handle?