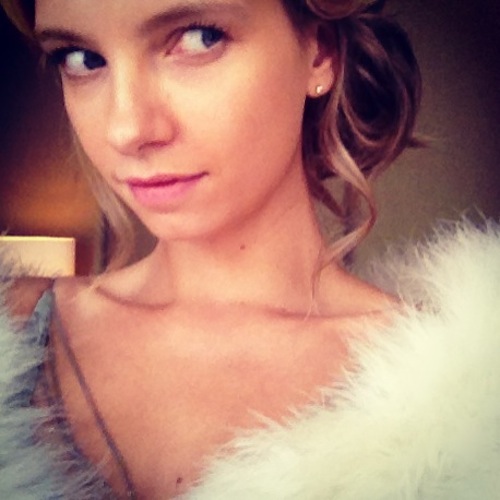 Ten whole years ago I did a lookbook shoot for a (then) fledgling dress designer called Jenny Packham. It was quite common, early on in my modelling career, to be given clothes in lieu of payment when I did certain jobs – as a “new face” you tend to do a lot of work for free or very little money. (Instead, you gain experience and beautiful pictures for your portfolio which, in turn, will hopefully gain you more lucrative jobs!)

So: the dress. I could have picked any of the dresses from the shoot that day – all were incredibly detailed, heavily embellished, finely-crafted dresses – but inexplicably I went for the one that had caused me the most trouble. When I wore it, the chains and crystals all tangled up together so that I could barely move; the straps cut into my shoulders painfully; the cut was low, unforgiving; the fabric was sheer…but when I wore it, I also felt a million dollars. I don’t say that lightly – I’ve worn couture dresses that have cost more than a house! – there was just something about this dress. So that’s the one I chose, and a month or so later I popped into Models1 and there it was, a new, specially-made-for-me version, hanging up in the back room. I promised myself that it wouldn’t be a dress that would sit in the wardrobe – I’d show this dress off, I’d wear it to parties and weddings and all sorts…. 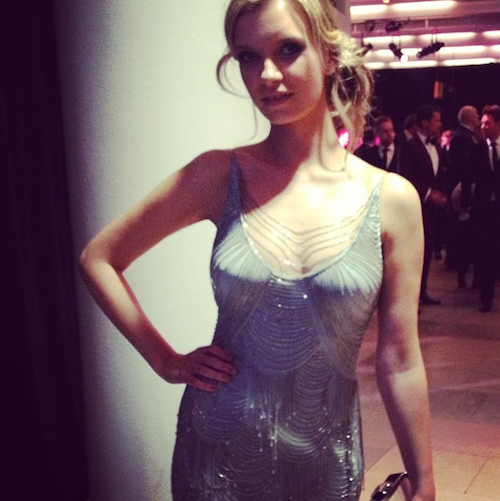 Cut to ten years later, the TV BAFTAs, and me pulling the dress out of the wardrobe to give it a try-on. I couldn’t believe that it even still fit! But fit it did – like a glove. I think, probably because I’m a little fuller in the old curves department, that it fits a little better than it did ten years ago, but I can’t find the old Jenny Packham lookbook to compare the pictures! I was dubious about wearing this dress to the BAFTAs – it’s a very long event and you have to spend quite a portion of it sat down – but it was Mr AMR who eventually convinced me. He’s been trying to get me to wear this dress for a whole decade!

So, here I am trying the dress on in my bedroom. Please excuse the numerous handprints on the mirrored door – just one of the many chores I don’t get around to! 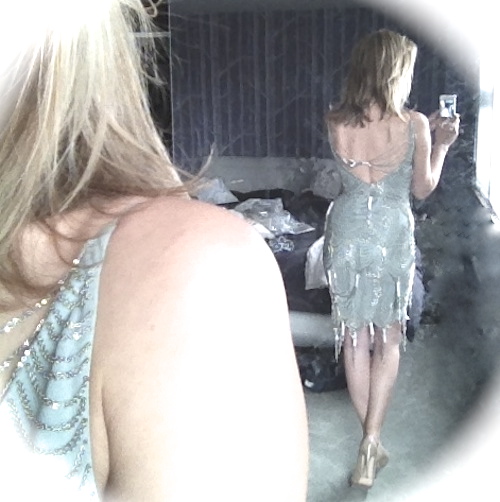 Here I am trying it on in the hotel – you can see that all of the little chains and crystals are meticulously folded into little paper packages all over the dress to stop them tangling up and ripping the fabric: 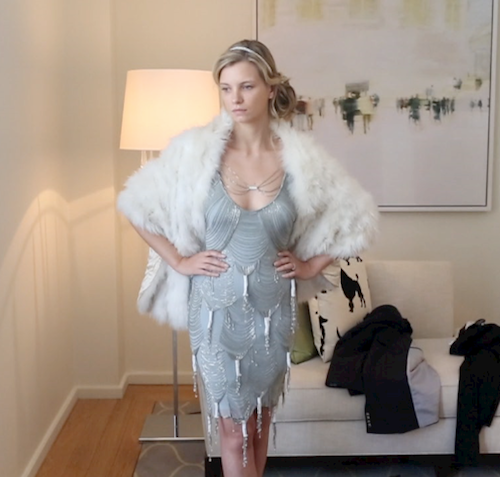 I later added some “nipple protectors” because I knew that I’d have to walk the red carpet and if there’s one thing a pap loves, it’s some kind of nipple appearance. (These nipple-cover things are amazing – I’ve had them for years and they are invaluable if you need to go bra-less. I know there’s nothing wrong with a bit of visible nip, but sometimes you just don’t want everyone talking to your smuggled peanuts!) I think mine are these: Self Adhesive Reusable Fashion Hypo-Allergenic, Silicone Gel Nipple Cover

I also added a feather vintage wrap, my “usual” nude heels and a gorgeous nude satin clutch from LK Bennett – the Amelia – which is actually on sale at the moment should you fancy it! It’s here: www.lkbennett.com/bags/clutch/BCAMELIA673SATIN 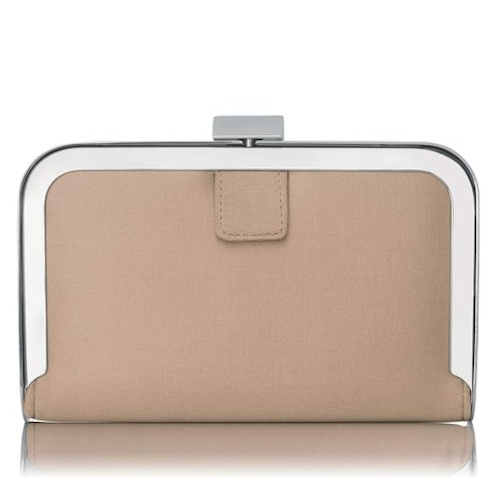 I couldn’t cut the little parcels of crystals and chains until the very last minute, because they would have tangled up, so Mr AMR very kindly spent twenty minutes in the lobby of the Corinthia hotel “finishing” my dress for me, both of us fumbling about with our clumsy fingers trying to un-knot all of the chains! 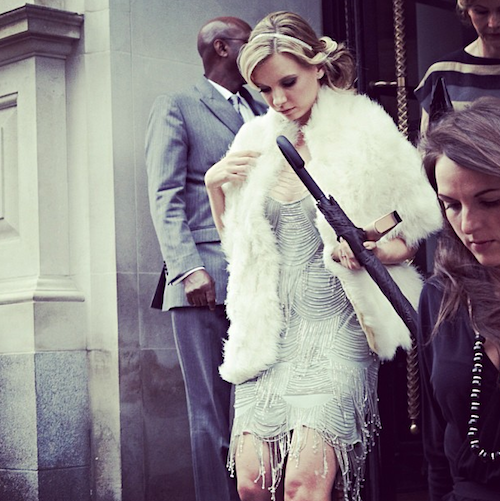 Here are some pics from the red carpet – my hair was styled by the wonderful Mark Hill and my makeup was by MAC, my skin was made slightly tanned and glowy by St Tropez and my umbrella was borrowed from the Corinthia hotel. The doorman looked completely shocked when I actually returned it, as promised, at about 1.30am!

In the rain, waiting doing my vlog: 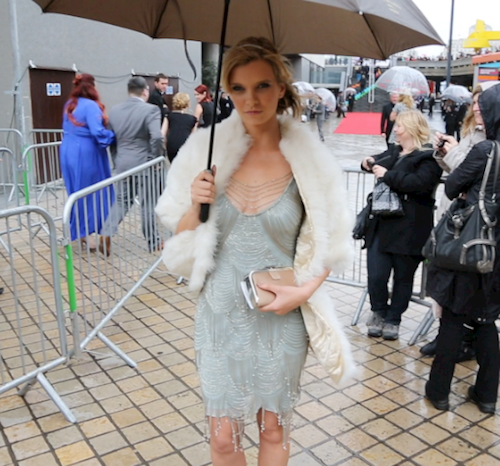 On the red carpet: 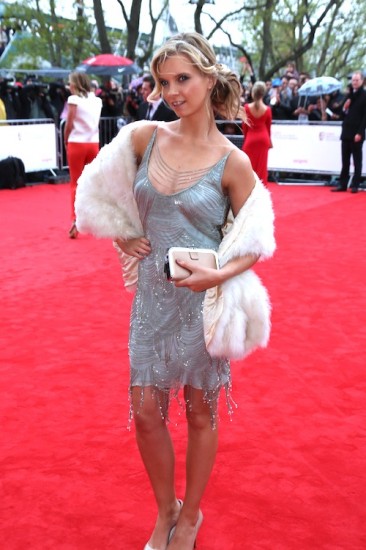 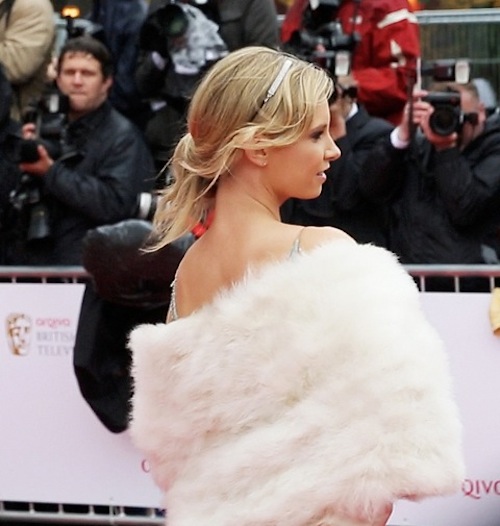 For more red carpet footage, see the video below. I’ve actually made two videos about my BAFTAs day – the first is more focused on the look I ended up going for (Great Gatsby (ish) style) and the second is a vlog. I’ll post the vlog later in the week so that you’re not overwhelmed! If you’re reading via email then you need to click here to watch the video – everyone else simply look down!

Thank you so much to Mark Hill for my wonderful hair – you can tweet Mark here: https://twitter.com/markhillhair
and his website is here: http://www.markhill.co.uk

I do not have a list of the MAC products used for my makeup but the lipstick is Viva Glam 5. I will try to hunt down the makeup artist and get a list of products!

I had my skin “finished” by St Tropez – a mixture of wash-off tanner and body lotion. See vlog for a little info on that!

Dress is by Jenny Packham. I have a feeling it’s a one-off! http://www.jennypackham.com
Shoes and bag are LK Bennett: http://www.lkbennett.com
Feather wrap is vintage, but I bought it from Lovely’s Vintage: http://lovelys-vintage-emporium.mysho…)