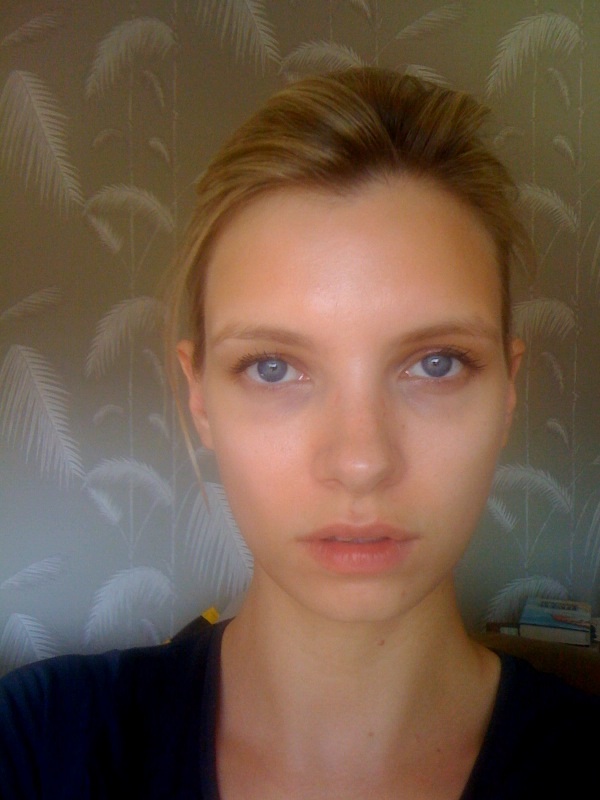 This is me, two hours after my ‘Green Peel’ at the Beauty Lounge in London’s West End. As The Beauty Bite pointed out, I look as though I have swallowed a candle. Hopefully she didn’t mean that I had a pained expression, trickles of smoke coming out of my ears and a rather conspicuous lump in my throat – I think that she was referring to my ultra-glowing skin. Just look at it! This was taken on my iPhone, in natural light, and I only had a few dregs of mascara on!

For those of you thinking that I had to suffer hours of being sandblasted and chemically polished to achieve this glow, think again; the Green Peel took thirty minutes, was completely relaxing, and used entirely natural products. The ‘magic hands’ performing this speedy treat? They belonged to uber-facialist to the stars, Nuz Shugaa. Nuz travels the globe tending to some of the world’s biggest actors and models, preparing their skin for red-carpet events and important photo-shoots. After just half an hour with Nuz, I can absolutely understand why she is one of the most sought-after facialists; my skin is ridiculously glowing and clear, with no irritation, redness or tightness.

Nuz used products from the newly relaunched energys range, which are totally natural and kind to the skin. She gave my skin a quick-but-thorough cleanse, applied a gorgeously light eye moisturiser and then set to work with the peel. The peeling agent that she used? Nightingale droppings! Don’t freak out – it’s not like they’re applied ‘raw’ (what an image), the droppings are dried and milled into a powder before they are used as an ingredient! Then it works at eating away dead, dull skin (just like a fruit enzyme) to reveal fresh, radiant skin underneath. Because the peel was entirely natural it didn’t sting or burn – even though it has to be quite concentrated in order for it to work in such a short amount of time. After the peel was removed, Nuz applied a toning masque, and then finished the treatment by massaging oils into my skin to really get it glowing.

I think that the Green Peel gives incredible results in thirty minutes – it’s so little time to commit to, you could pop in at lunchtime. I want to say that it’s an ‘express’ treatment, but somehow it just doesn’t seem right to call it that; yes, it’s quick, but it doesn’t cut any corners. I feel as though I got a tremendous amount from my half-hour – I really feel as though I have had a permanent ‘illuminator’ applied to my skin!

I’ll be posting up more details on the energys range at a later date, and, as Nuz is officially my new Skin Guardian Angel, you’ll be hearing more about her wondrous ways in the future!

To book a Green Peel with one of Nuz’s specially trained therapists, go to http://www.beautylounge.co.uk – treatments are £50, or £100 if you manage to get an appointment with Nuz herself (join the queue!)