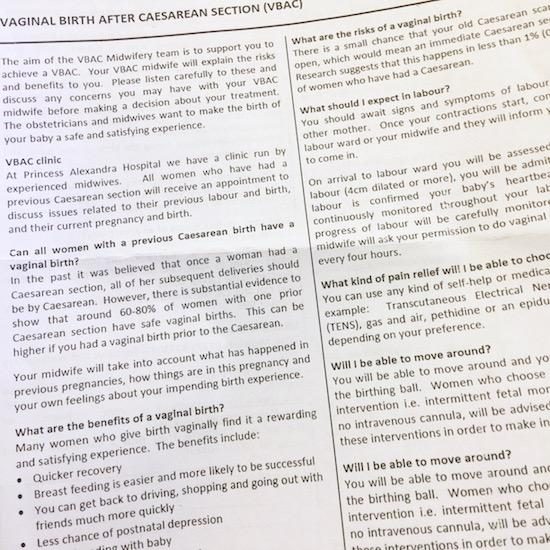 Firstly, thank you so much for all of your comments on the previous VBAC post. I really found them very useful, and somehow quite reassuring – it’s easy to get lost in your own thoughts and think that nobody else is in the same boat as you. But it seems that the whole VBAC (Vaginal Birth After Caesarean section) issue is a huge one and affects so many people. I’m so touched that so many of you shared your stories and experiences, or simply piped up with your thoughts and opinions – I’ve enjoyed reading them and I will get to replying.

I wanted to update you as soon as I’d been to the VBAC class (which was a compulsory class run by my local hospital) so that things are still fresh in my memory. I did take notes, but there were a couple of things that occurred to me as I sat there, and I think that they are quite important revelations.

I’ll start by saying that many of your comments on the previous post put me in a great place in terms of going to the VBAC class with a very open mind. Hearing about your experiences, and the fact that so many of you reported on them in a very calm and collected manner, made me feel more confident and in control. Rather than going to the class on the defensive, thinking that the midwife would try to push me in a certain direction – either direction! – I went in feeling as though things were under my control. That it was my decision. And so, as I sat down, I felt that I could listen to the pros and cons and whatever the midwife had to say and that I could absorb the information without feeling irritated or pressurised or frightened.

So far so good, until about thirty seconds in when the old “just because you’ve had one c-section, don’t think you can have another!” statement came out. Now look. This sort of thing really riles me. I know that it was a sort of “shock tactic” by the midwife to get her point across (and actually, she was brilliant, a great source of info, and the one-on-one at the end was very enlightening) but seriously: you’re talking to a room full of women who have had an emergency c-section previously. It’s not that they want to be in this position, of having to talk about burst scars and “gentle” inductions and the possibility of a repeat emergency section – nobody is there to take the “easy option”! I think that this has to be my main bugbear with the whole way that the VBAC issue is approached. I feel as though I’m being punished for being “soft” or “too posh to push” when my situation during the birth of my first child was totally unavoidable. Also, is it any wonder that these women are slightly apprehensive (or downright terrified) of a “natural” birth? Let’s think this through: they’ve had an emergency c-section previously, which means – quite likely – that something went wrong during delivery. It’s fairly safe to say that their experience of birth has been traumatic in some way. A quick whizz around the class revealed this to be true – stalled labours that had been aggressively “augmented”, instrumental interventions, stuck baby-heads, high-speed dashes to the operating theatre, lost blood, and so on and so on. If you’ve had this sort of experience (and it seems that many women have these traumas, and worse, with or without c-sections) then isn’t it understandable that you’re not all gleeful about it potentially happening again?

Anyway, after this little revelation I sort of felt better about things. I listened to the stats and to the pros and cons, but in the back of my mind, a little voice kept saying, “do you know what? Do what is best for you. Sod everyone else. Find out what’s safest for you and then do it.”

So now it’s all about doing what’s best. Or the least risky. I want to find out whether I’m carrying a large baby again, because for me that’s a big factor after the consultant said that I would never have delivered naturally. (I know I’m obsessing over that, but it’s a hard one to shake from my head.) I want to find out which way my baby is lying, too (the last was breech, this one seems to be always head-up!) but obviously both of those things are a little later on down the line. And this was the main thing that I came away with, actually – the fact that I don’t need to make a decision now. I’ve got plenty of time. I can arm myself with information, but not too much information, and I can try and find out as much as I can about the size and presentation of the baby and then make my decision accordingly. Apparently there’s no scan offered as a routine measure, but I can have an appointment with a consultant at 34 weeks and they will order one then if they think it necessary. The control freak in me is tempted to book one of the Mothercare scans before then, just to satisfy my own curiosity! I think that it would be £99 very well spent… Scanoholic!

Some things that I learned from asking my hundreds of questions (I’m sure the midwife wanted to kill me):

I suppose this is what puts me off a VBAC quite a lot: it’s not as though it’s going to be set up in the same conditions as the ones that they say are optimal for birth. A calm, dimly-lit environment with minimal doctor interference and (hopefully) no intervention – plenty of space to move around in, for your partner to help you move around in… In my natural birthing classes, we were told that the labour ward gave the exact opposite conditions for a good birthing environment, so I feel as though I’m being encouraged to try for a “natural” birth but in a sort of labour-hostile place! Melodramatic, sorry, just trying to get my point across clearly…

Now all of this is currently a bit of a moot point, as I’ve just found out that I have another large (at a guess) breech baby. Could still turn of course, and it’s too early to tell whether it will definitely be breech, but if it is then I have no choice. My hospital wouldn’t allow a VBAC in that case. But that little twist in the tale ignored, I’m still no closer to really knowing what I would want to do. Just going to the hospital and having my blood test last week have me the heebies! An elective section isn’t something I would particularly look forward to, though obviously I can’t wait to see the baby and want him or her to come out in the safest manner…but then would I stress so much during a natural labour that it would just be a nightmare?

Oh also, I forgot to say: I was twelve days overdue with Angelica. They do let you go overdue with a VBAC at my hospital, but then you have to be induced at a certain point, and they have to be very careful with the induction as they can’t make the uterus strain too much with the drugs (does that sound right?) and so I can just imagine that bloody well ending up in an emergency c-section too!

Humph. I shall continue to ponder. I had some stats to show you but I can’t find the links – I’ll do another post with the guidelines I found and so on. Cheers again for the comments, keep them coming!