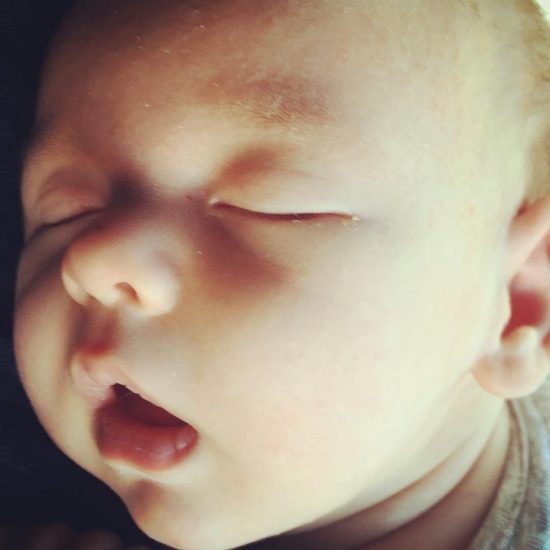 I feel as though I should add a disclaimer to the start of this post, because so many people have written to me  recently saying things along the lines of  “oh my God, I’m so worried about giving birth/having a newborn/getting pregnant now that I’ve read your posts!”

This is absolutely the opposite of what I want my posts to do. I really can’t abide scaremongering and so I’ve always tried to report on things with a relatively jolly and optimistic lean. That said, one has to get the balance right; fluffy head-in-the-clouds posts are boring to read, and they’re also not entirely truthful or realistic, most of the time.

So, writing about birth and babies is one massive tightrope act: I want to write honestly, but I also get that things can come across far worse when you start writing them down. Being covered in baby poo in the middle of a restaurant as your boobs squirt milk over a man on the next table sounds fairly horrendous, but it’s a fleeting moment your (hopefully) long and eventful life – you get over it. Throwing up an hour after you’ve had your stomach stitched together post-caesarean may sound like the worst possible thing that could ever happen, but – again – you forget these things quite quickly. They’re all just moments in time. (Some people, unfortunately, have it very rough indeed; I’m not by any means suggesting that the above applies to them. It’s hard to forgive and forget when you’ve been through something very traumatic, or you’re depressed, but luckily I haven’t and so I do try to report back on things with a touch of levity and self-deprecating humour.)

Please do remember when you read my insane ramblings that a) it’s my experience, which will not be the same as your experience and b) I enjoy writing things that make people laugh, or touch them in some way, or at the very least keep them relatively engaged. Oh, and all of this should be set against the fact that – genuinely – having babies has been the best thing that’s ever happened to me. Intense, but utterly life-changing and so unbelievably joyful. And on that note, let’s talk about all of the things I’d forgotten about newborn babies! 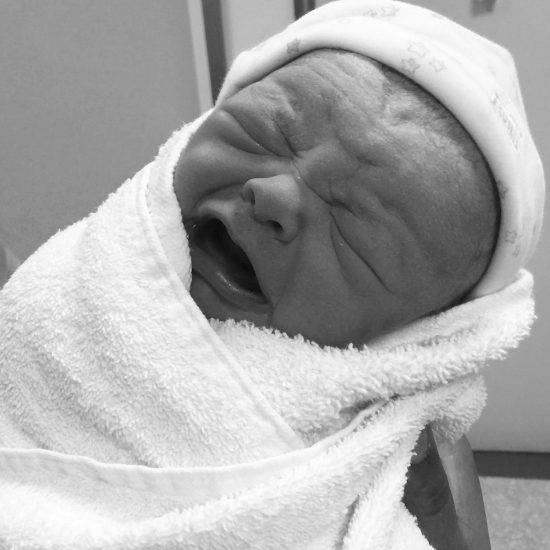 After you’ve given birth, being handed the baby is like being handed an alien. Newborns (I mean freshly newborn) look like aliens, they move like aliens (I’m thinking the ET kind of alien, just in case you need a reference point) and they sound like aliens. Also, depending on what sort of birth you’ve had and how long the baby was “cooking in the oven”, (NOT LITERALLY!), it’ll have weird skin or a strange shaped head or funny wrinkles. Like an alien. Ooh – and sometimes their eyes look like tiny jet-black alien eyes. Ted’s did. When I was off my tits on morphine I started actually believing that he was an alien life-form. Thank goodness I got off it quick!

Newborns poo and wee loads. Sometimes they do a poo and a wee when you’re still cleaning up the last poo and wee! The poo actually smells really nice, I think (is that weird?), at least breastfed poo does – like a caramel sort of smell. Is formula poo the same? New to me, though, is cleaning poo from a miniature scrotum. (That’s a sentence I never thought I’d write.) How the hell are you supposed to efficiently and thoroughly clean something that’s as wrinkled as a mini scrotum? It’s like trying to wipe peanut butter from a deflated balloon!

Newborns can poo so violently that forces its way out of the back/legs of the nappy and into all surrounding areas. If the baby is being changed, and the bottom is dangerously exposed, the poo arcs into the air like some sort of modern, vivid yellow fountain. Then it lands on you and you spend thirty minutes trying to compose a tweet about being covered in shit that will make people laugh but also not offend people. You never tweet it because, ultimately, being covered in shit is not that funny. Especially at 2am. 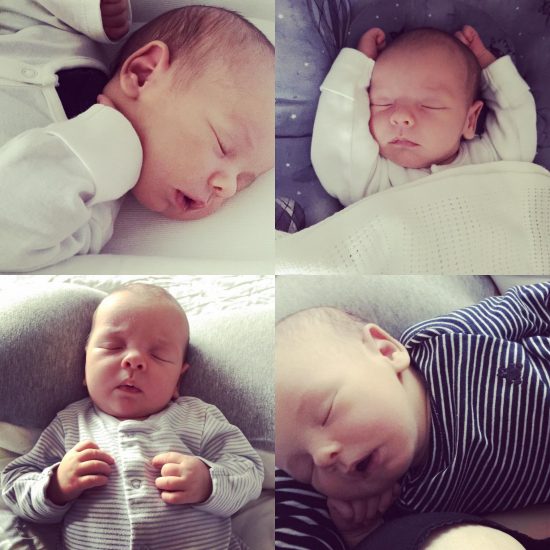 Newborn babies are REALLY REALLY NOISY. Sharing a room with one is worse than sharing a room with a snorer! Grunts, massive trumps that vibrate the room, continuous noises of straining and gurgling.. People wonder why you get no sleep when the newborn baby clearly sleeps loads – this is just one of the many reasons. But, see below…

People tell you to “sleep when the baby sleeps” and it makes you want to smash them over the head with the baby monitor. Because if you’ve had a baby then you know that half of the time you can’t sleep when the baby sleeps. This is because a) the noise thing mentioned above, b) often the baby will soak itself, its mattress and all of the blankets in wee and you will have to spend an hour making everything good again, by which time you’ll need a wee yourself and then the doorbell will go and then you’ll be hungry and need food and a glass of water, then another wee, then perhaps a shower because you’re covered in wee/poo/sick, c) if you sleep all day and don’t see anyone it makes you feel depressed, d) we are programmed to sleep at night and wake up in the day, there are only so many naps a person can force on themselves. Phew. 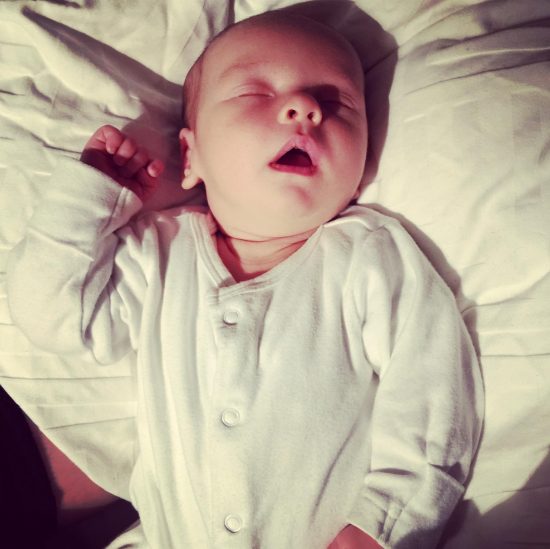 There is no rhyme or reason to what newborns want, and they have no routine. Hard to get used to again when you have a toddler who goes to bed at seven pm sharp, naps from 11.30am-1.30pm and has meals at roughly the same time every day. Ted the Newborn is just random! A few things are predictable though: if you need to go somewhere in a hurry then he will puke. And then need feeding again. If you are incredibly tired then he will be restless and awake through the night, and if you’ve just changed the bedsheets then he will do a poo explosion. It’s the law.

They have really sharp nails and sometimes, when they’re being particularly fussy and won’t latch on to the breast properly they’ll use them to scrape at your irritated, wet nipples. And about that “fussy” time, when they do a cry-feed-cry thing for hours on end; you’ll think to yourself that there’s no way they could possibly need a feed again, but try it. Ted has a few hours a day when nothing will make him happy – I just have to feed, wind, feed, wind and try not to lose my sanity. This is usually the time when I like to pass him over to my husband and eat a Mini Magnum and pretend I’m on a desert island. 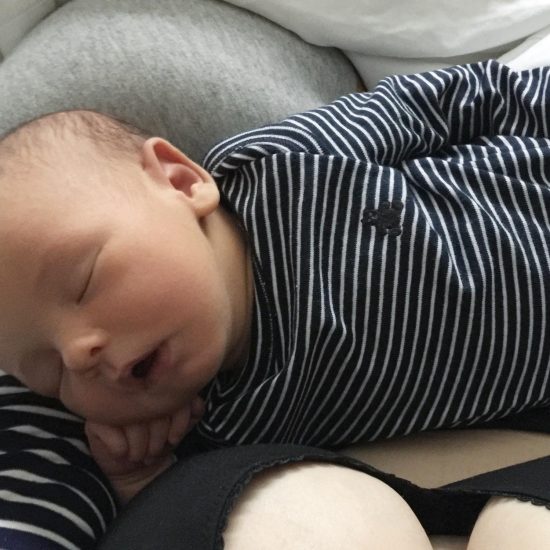 Nobody can prepare you for just how intense a feeling it is to suddenly have a baby in your arms. I say intense, because for some people it’s not immediately all roses – it’s not always love at first sight, even though it perhaps sounds terrible to say that. I think that the first few weeks can be a blur, when you just keep your head down and try to keep the baby alive and yourself sane, and then when things settle down you realise just how magnificent and all-consuming your love is for this tiny little creature.

Newborns change really quickly. They grow at a phenomenal rate, and after a few weeks you can’t even remember how small they were when they were first born. And their stomachs mature, so they settle better, and they get the knack of feeding so your boobs feel better, and suddenly they’re not an alien anymore but a smiling, gurgling baby. One that sleeps better (hopefully) and cries less (hopefully) and makes you feel more and more confident every day that you have a handle on things. That you can DO THIS! And you forget everything that went before – which seems to be the case with every child and baby stage, doesn’t it? Sometimes I think that parenthood is 90% forgetting everything that has happened previously.

Anything I’ve forgotten? Comments below!