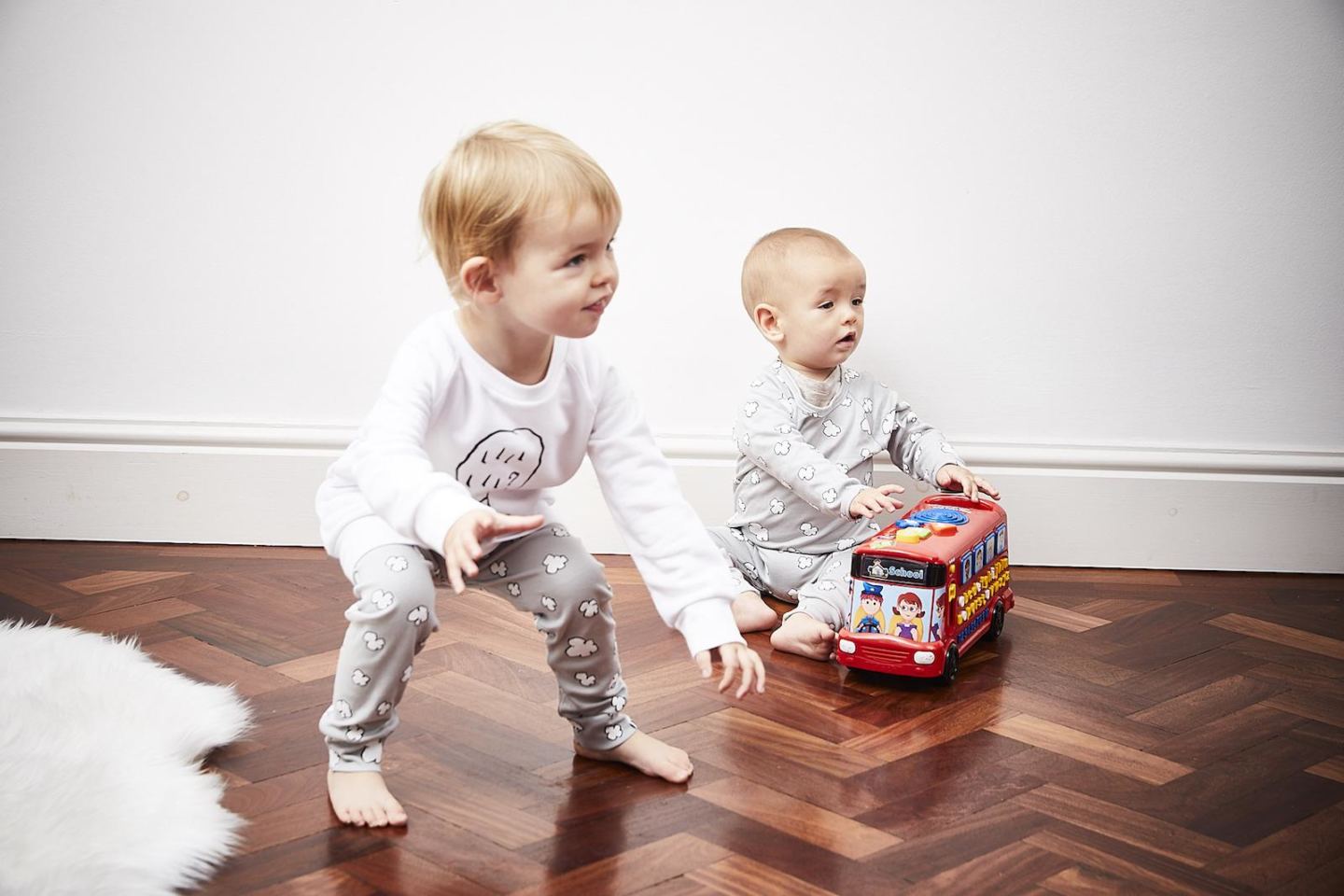 I genuinely thought that I would be able to kick this post off with some amazing news; the day after I wrote about Ted’s persistent night-wakings, I implemented some changes and he had the most restful night he’s had for months. I think that he perhaps only woke once between 11pm and 5am, which is very good going for us. Yes! I thought. My reverse-jinxing has worked!

Not so, unfortunately because then last night we had one of the worst times we’ve had in months. Every ninety minutes and completely awake from 1.30am-4.30am, batting me in the face with his arms and generally being the most wide-awake person the world has ever seen.

Who knows what tonight will bring? I’m trying to get this written up in good time for me to go to bed straight after his 11pm feed and so let’s get on with it – the 9 month baby and body update. With, of course, news from Angelica, who is now two years and four months old. 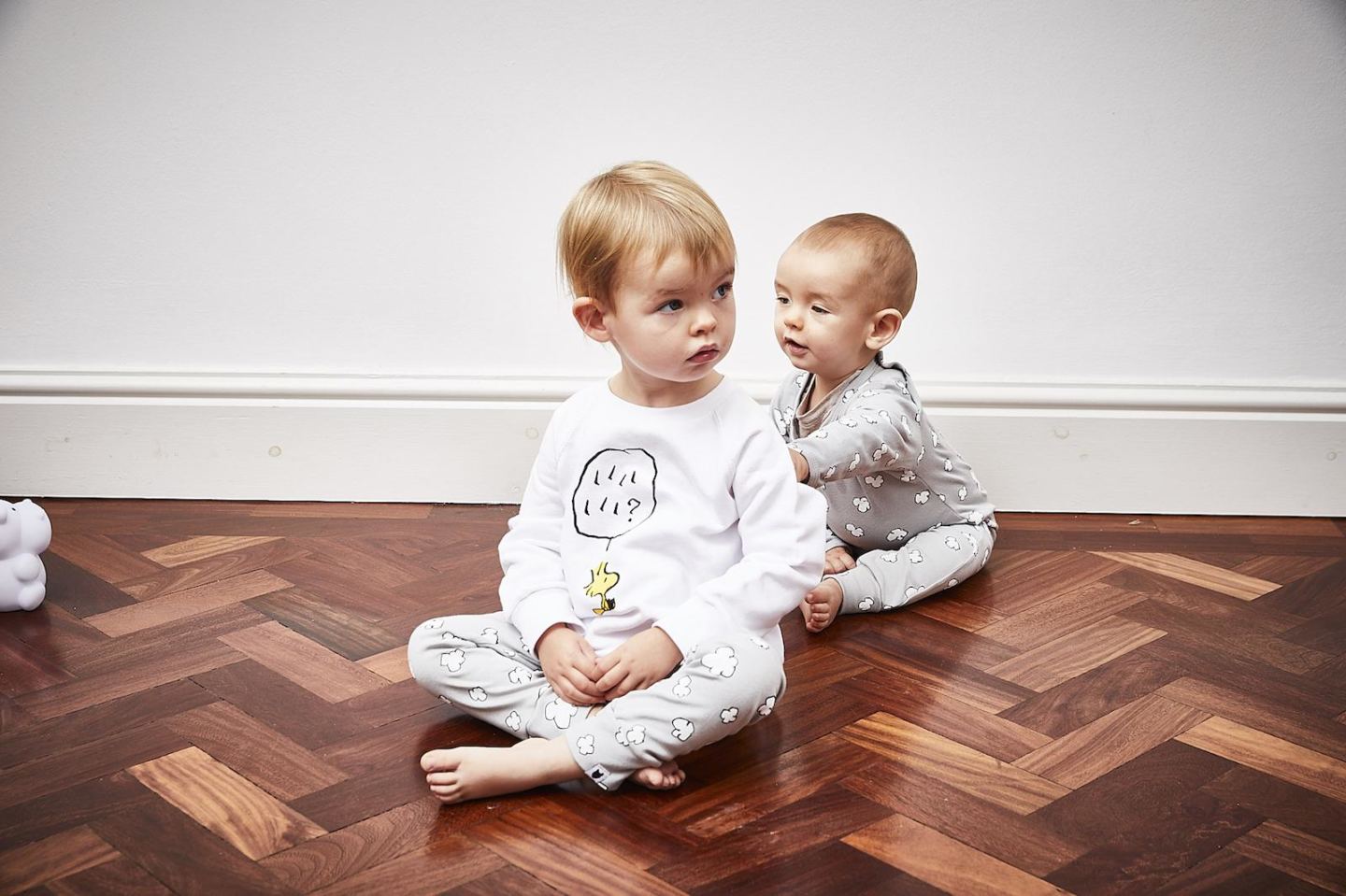 Angelica is just funnier and funnier by the week. I look forward to everything that she does and says, and the first few moments when I see her in the morning are one of the best parts of the day. She’s nearly always cheery, but even when she’s not I can’t resist that warm, clammy little face and the half-finished sentences she babbles on with.

I shouldn’t really say “babbles” because she’s quite eloquent. I don’t know where she’s picked up her posh voice from, but she pronounces things in such a precise way. It’s so brilliant being able to have little conversations – I can’t imagine, now, what it was like having to just sit and say things at her, with very little back in the way of recognition or sensible response. Or actually, I can imagine, because I’m going through the same thing with Ted!

I love the way she’s so strong-minded about things that she wants to do and wear and eat. It can be a bit of a battle, but it’s a fun battle for the most part. A constant process of negotiation. There’s a massive element of her having to do what we want to do, or eat what we want her to eat, obviously – who’s the adult here?! – but I like watching what she does when I ask her to pick out her clothes for the day, and I like listening to her coming out with all the activities she wants to do. 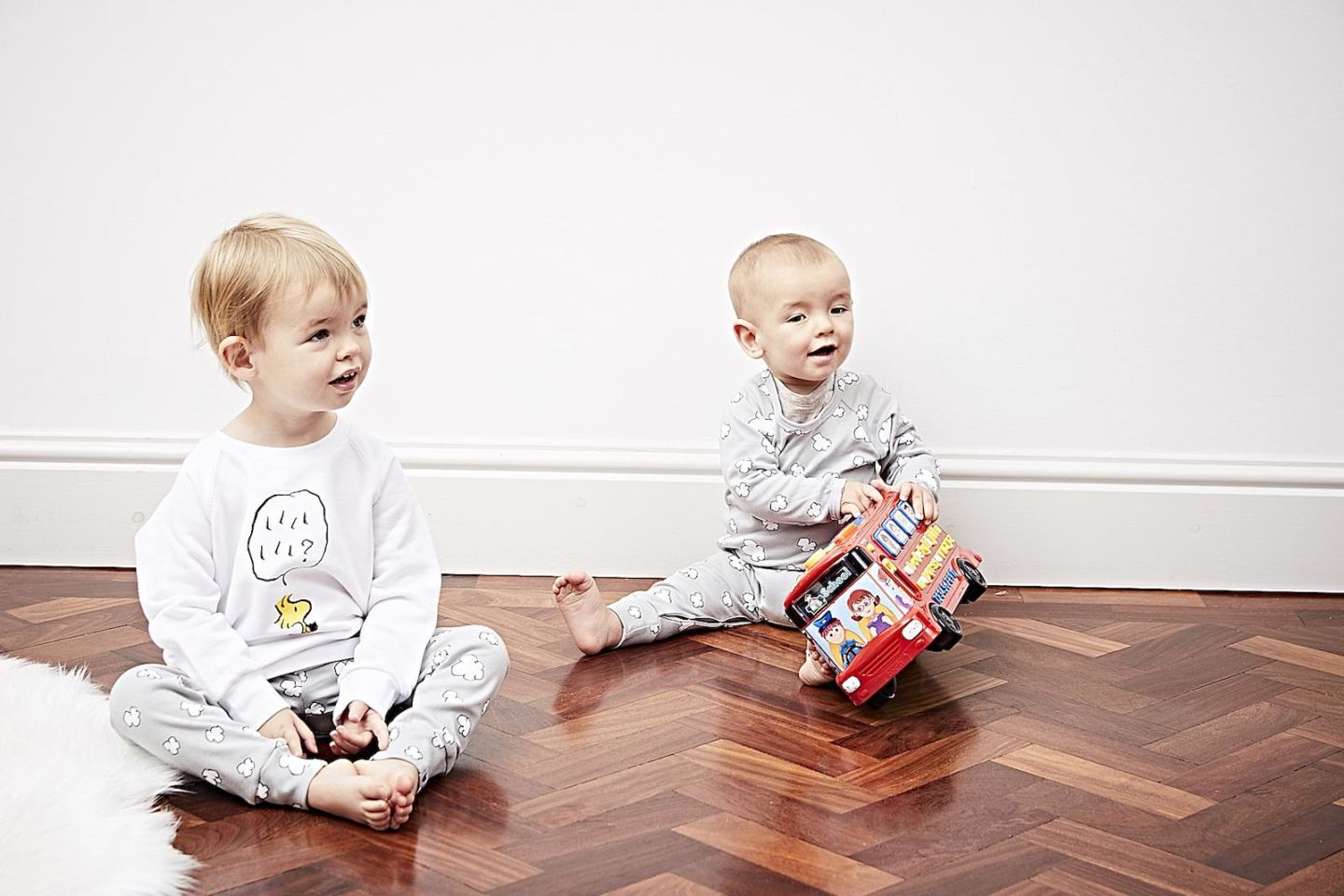 Potty training is no more advanced than last month really – perhaps we’ve managed to get her on it a little more during the day, but the main times that she uses it are in the morning after waking, before and after her nap and then before bedtime. Which is entirely our fault, because I think we need to take the plunge and go the full monty with taking the nappies away, but we haven’t been brave enough yet. We keep making the excuse that we have a load of other stuff going on, and I suppose we have (another imminent house move, more on that later when we exchange contracts!, frequent night-wakings, no nanny, a complete change of scenery) but still. Until we go to the next step and make her want to use the potty each time, I think we’ll be stuck in limbo a bit.

Angelica’s favourite toys: her wooden foods, her pink Ikea table and chair, her dolly (was my dolly when I was little, has survived very well!), her wooden tool kit from the charity shop, Ted’s Jumperoo. (She likes to turn the music on and dance to it.)

Angelica’s favourite activities: dancing to the Jumperoo, going to the Old Park (Victoria Park in Bath, with loads of playgrounds in one park), going to Sainsbury’s, watching Dora the Explorer, playing catch with the stuffed reindeer. 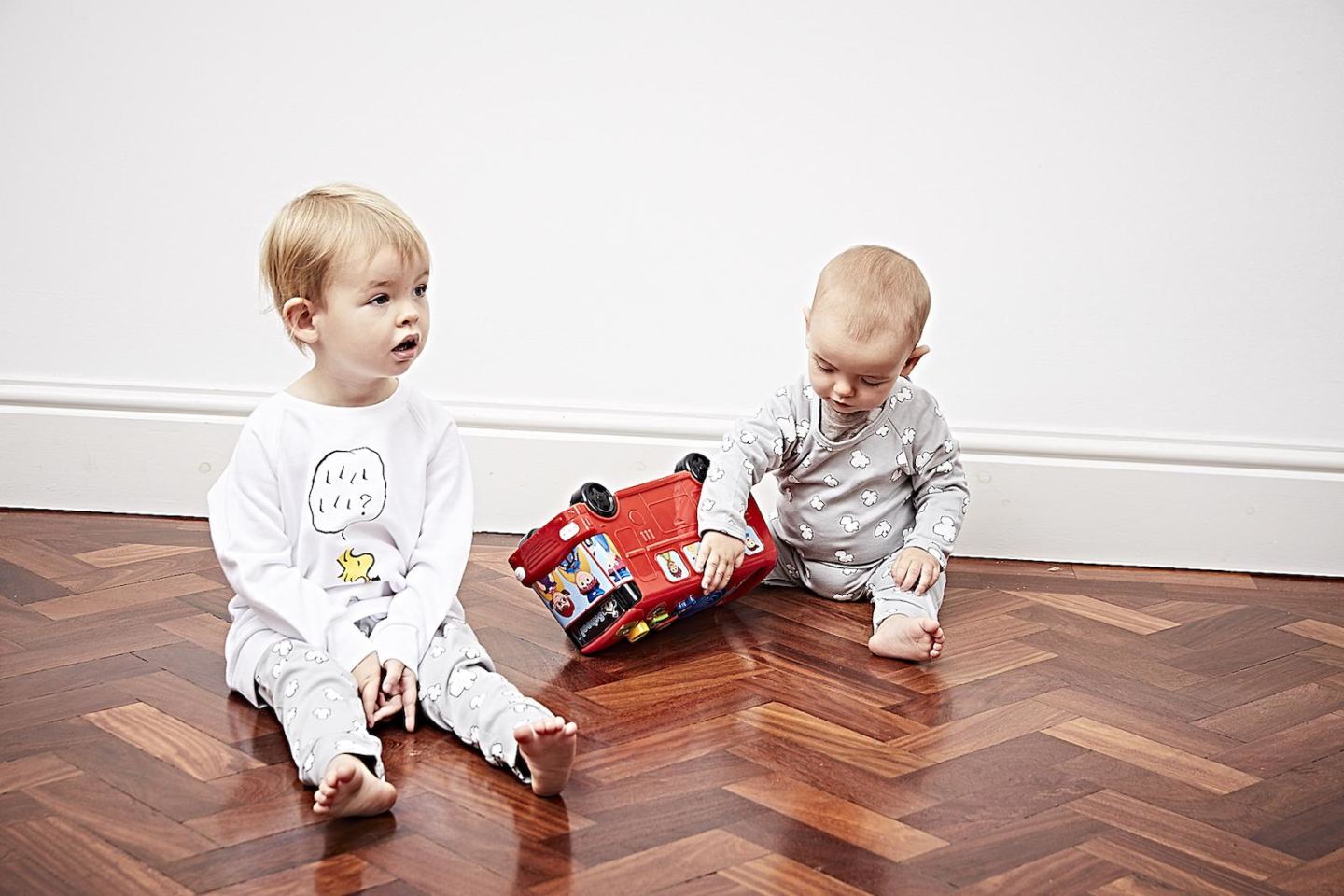 Ted’s month has been overshadowed by the night wakings, I’m afraid. Most days I’ve just been so preoccupied with how tired I am that I probably haven’t noticed a lot in terms of developments, though I think that he must have just had a huge growth spurt as he’s suddenly out of his old sleepsuits. But he’s interacting a lot more and responding to sounds and words that are specifically directed at him – he absolutely loves Angelica and breaks into a smile whenever she’s near to him.

He’s now chomping on things that he holds in his fists as I try to shovel in spoonfuls of Ella’s Kitchen – clumps of broccoli, slices of carrot, chunks of strawberry and cheese and toast and crumpet. He loves natural yoghurt with a bit of fruit puree and he’s partial to a pizza crust to gnaw on as well as bits of breadstick, though a lot of stuff just ends up dribbled down his front and pooled in the bottom of his bib.

I’m still breastfeeding, but we try and do a bottle of formula every day just to top things up. In all honesty, I’m not sure that this has been a great idea, because I’m sure it has messed with my supply and we are so haphazard about when he gets the bottle. Next week I’m going to write down a proper routine (I say this every Friday) and try to stick to it. Although I’m away for work a few times next week, so he will have to have a bottle then anyway. No overnights, still, and I can’t see those happening for a while yet either. 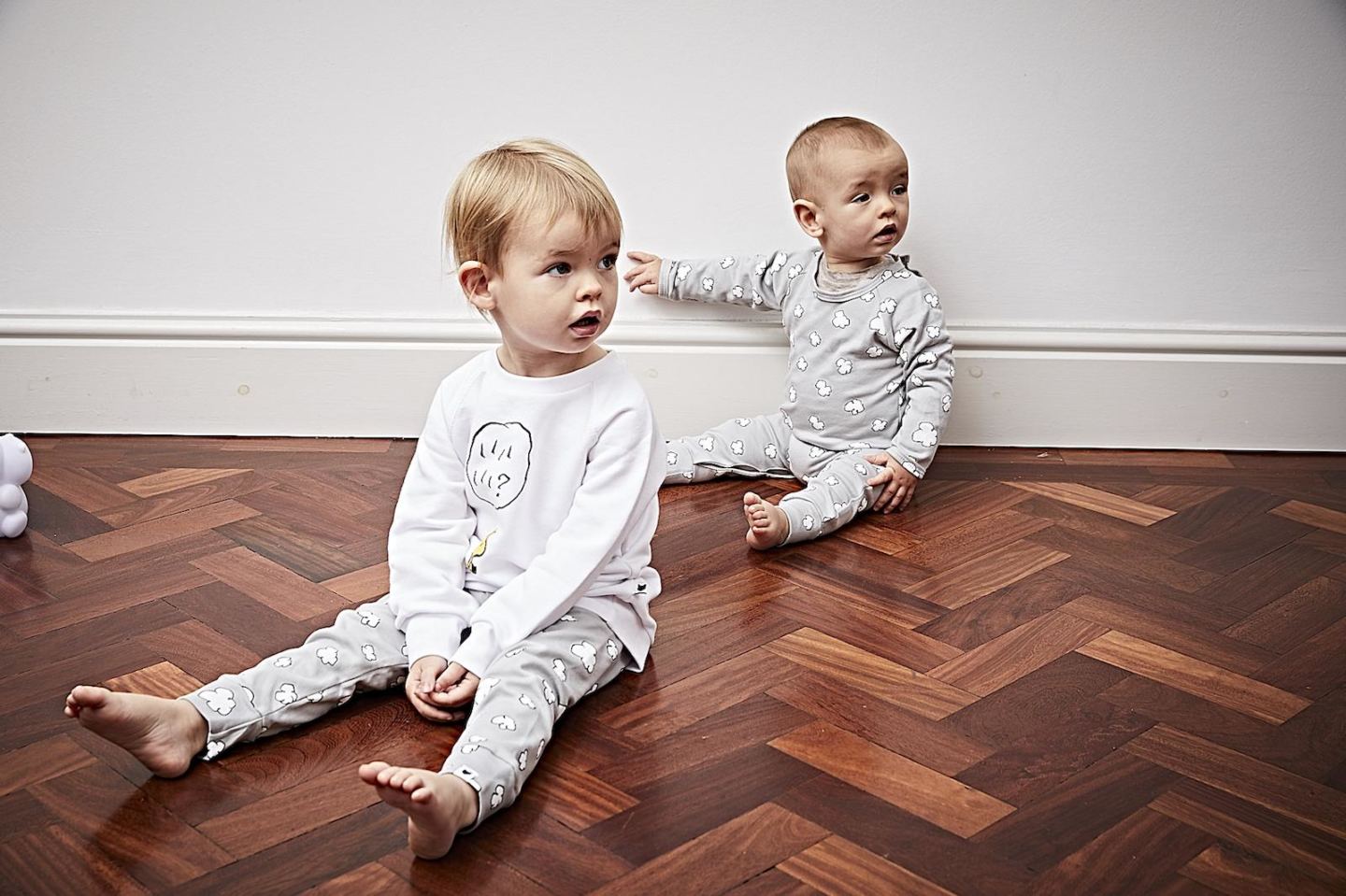 Ted isn’t a great breastfeeder – he’s very distracted and tends to latch on and be quite violent until the milk comes in, at which point he pulls off and lets it shoot around the room. This is almost every time. I don’t know whether I feed him too much (it’s still a bit on demand, though I think I misread lots of cues) or if the let-down is too strong, but it’s a lot of wasted milk. Bloody hell. Doesn’t he know how precious it is?! There are whole bars of chocolate that go into making the stuff! 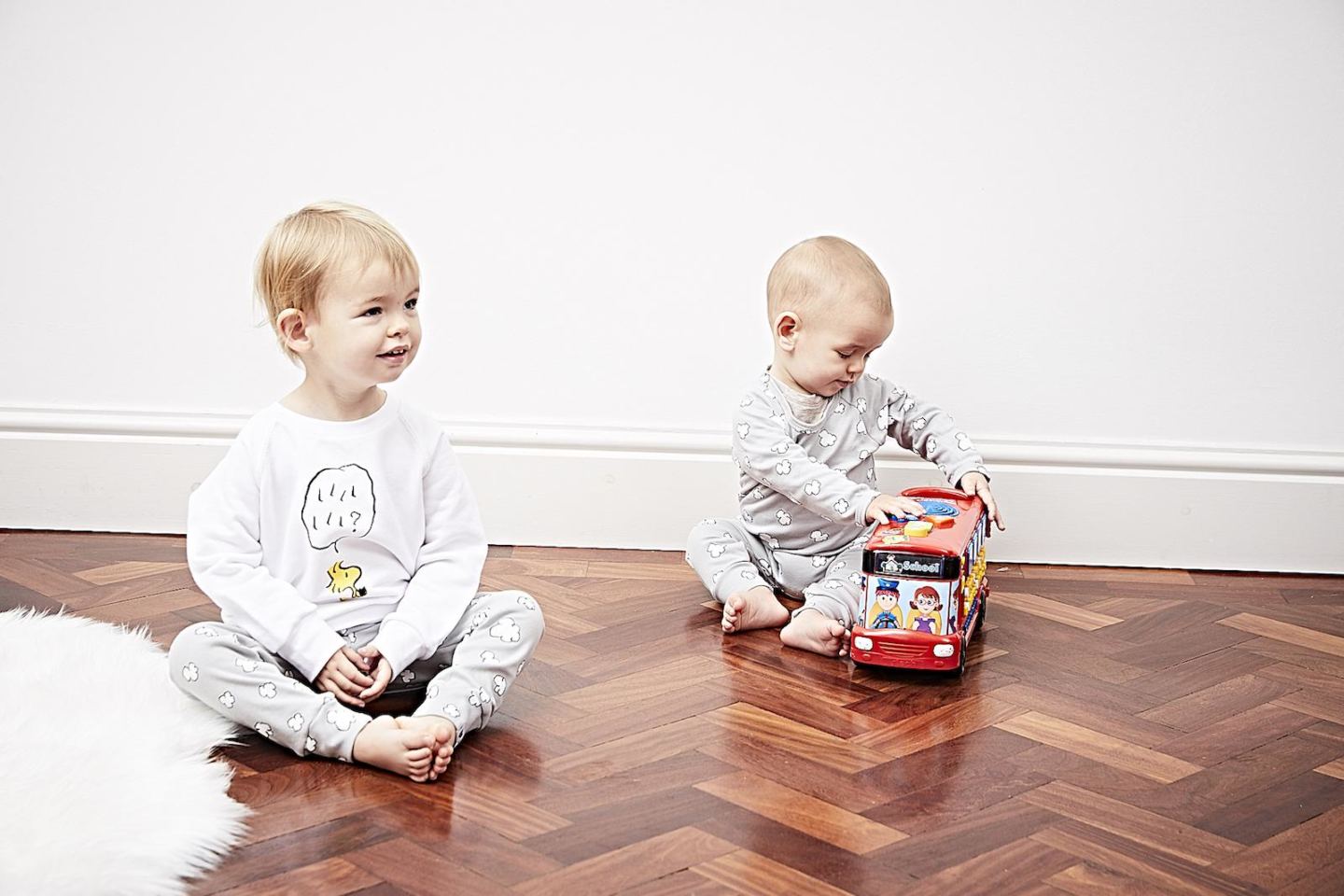 He’s sitting very well and rarely wobbles or topples, and he’s crawling backwards. I don’t know whether that’s because we have a shiny parquet floor here in our temporary abode, or he’s just decided that’s the way things will be. But he’s very strong on his feet and likes to stand and be walked forward. I do wonder whether he will walk early, or be a late walker like Angelica. Only time will tell! He’s such a dote – so cute – and on the mornings when I’m not absolutely done in, I love just chatting nonsense to him for ages lying in bed. If truth be known, I’ve quite enjoyed our bits of co-sleeping, where I curl around him and rest his little feet on the tops of my thighs and have his little warm head right next to my face. Sometimes he cracks me one right in the nose with his fist, which is always exciting when I’m dozing comfortably, but mostly it’s a lovely, close experience. I just don’t sleep properly if he’s there! Slight problem, when the whole point of being in bed during the night is to – er – sleep.

Goodness only knows how I’ve lost weight, but it seems I have. Breastfeeding must burn more calories than my one can of full fat coke a day that I treat myself to (terrible, I know, I’m stopping next week!) and my Magnum ice lolly in the evening. I’m slimmer, but I’m definitely not healthier, and as soon as we get this house move done, I’m cracking out the cookbooks and totally revamping the whole family’s diet. Enough is enough! I’m going to print out ten recipes and have some sort of loose meal plan so that if we are all tired I don’t resort to easy, bad choices.

Nothing else of note, body-wise, unless you count the fact that my ears have just pricked up because Ted’s monitor has come on! He’s crying, so I had better go on up and see to him. Did I mention this is his first night in his own room? I’ve cleared out my office at the back of the house (office/dumping ground) and we have put the cot in there. It has no neighbours behind walls, so I’m hoping that I will feel less inclined to jump to attention for the smallest cry. Perhaps he’ll get himself back to sleep for some of the smaller times he wakes up. Wish me luck!

You can read Angelica’s 9 month baby update in the archives here, if you’re interested in comparing.

The outfits in these photos were very kindly sent from gorgeous kids’ clothing brand Tobias & The Bear. It’s the Peanuts collection, which you can find online here.