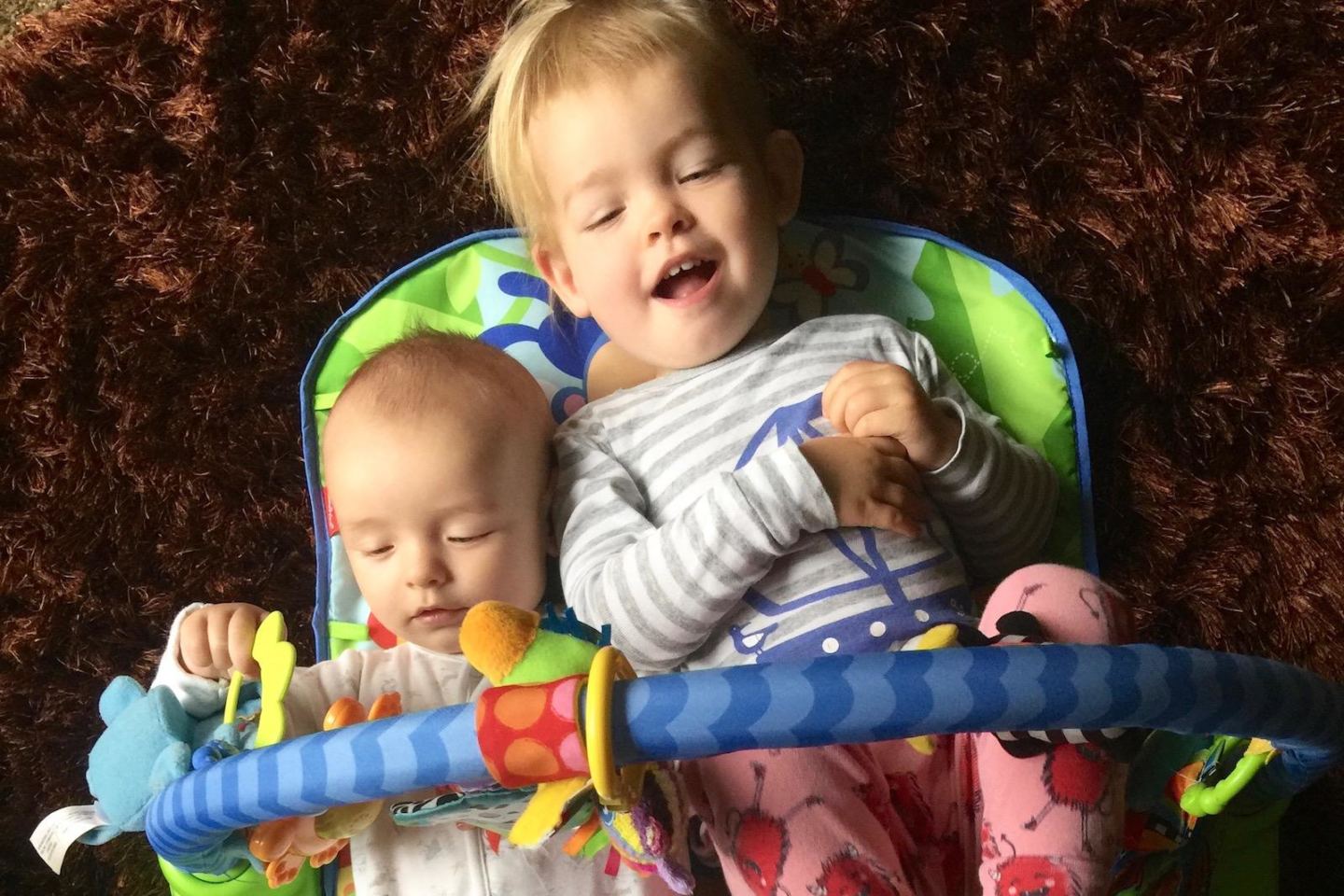 Wah – six whole months! The time is flying by far too fast. I keep finding myself getting very weepy every time Ted the baby does something remotely non-newborn-ish, like, er, growing a tooth. I don’t know whether it’s a hormonal thing, designed to keep us procreating, but every time I fold up a tiny sleepsuit to put it in the charity bag or the “keepsake drawer”, I go to absolute pieces.

Anyway, here’s what has been going on in our crazy, nappy-strewn household:

Angelica is two-years-and-a-month old and is now babbling away, stringing together mini sentences and soaking up new words like a little language sponge. I watched a video of her from a month ago and I can’t believe how much more she is talking – it’s really quite astounding how her language develops from day to day. Yesterday she pointed out of the window and said “Justin’s black car!” which I thought was pretty good.

One thing that I’m sort of glad that I never did: obsess over those books and online features that tell you when your child “should” be hitting certain milestones, like walking and grasping spoons and doing basic algebra, etc. I mean, I think it’s important to know if there’s a potential problem with your baby – for example, if they’re not supporting their head properly or they don’t seem to be very responsive or interested in anything – but developmental issues aside, it seems pointless to worry about whether your baby is going to walk at ten months or eighteen months. I’ll admit that I did stress a bit about Angelica walking late, but babies seem to do exactly as babies please, so what’s the point in worrying?

I like to think that Angelica was reserving all her energy for developing her near-genius brain. HA! 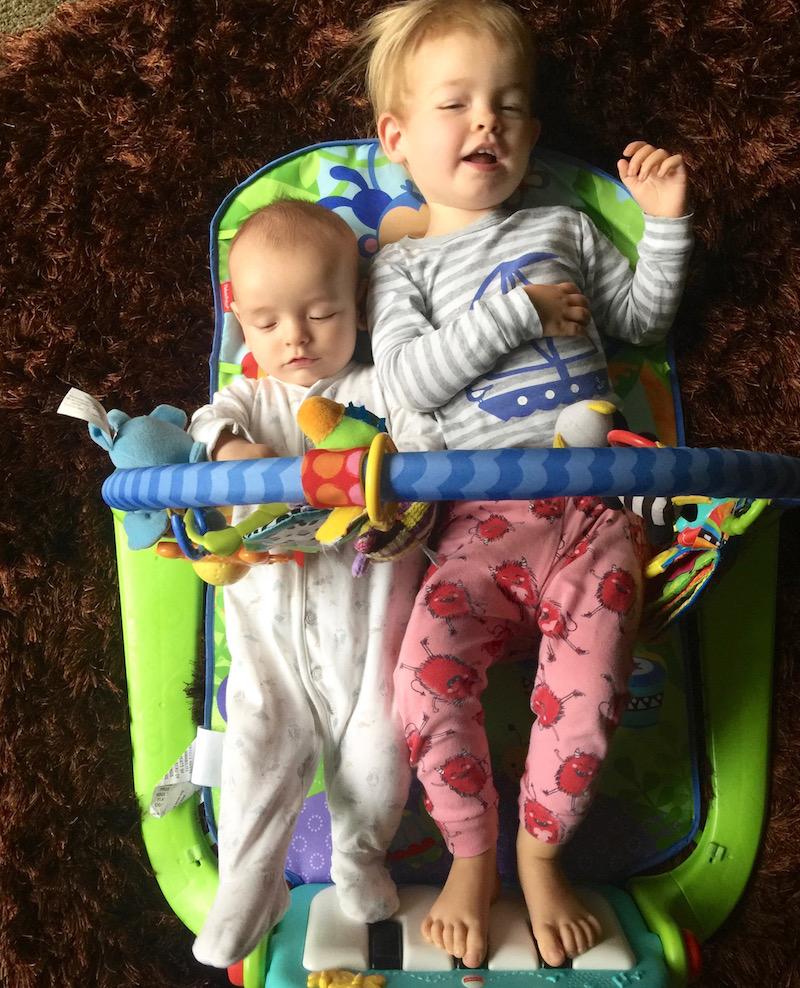 The most brilliant thing about this talking business is that we can actually communicate effectively. If she wants toast, she can ask for toast. (In the “blue bowl” no less.) If she wants to go to soft play, she can tell us that. (Not that I have ever been to soft play – nanny Jodi gets that beautiful task. Hohoho. I’ve managed to get out of it every time, mainly because I’ve been looking after a newborn, but now that Ted is more portable and predictable, I still don’t go because I like to think that soft play is Jodi and Angelica’s “special thing” that they can do together. You’re welcome, Jodi, if you’re reading! I know how much you love going there…)

Angelica’s favourite thing at the moment (apart from chatting to her dolls and teddies in bed for about two hours before she drops off) is spinning. Spinning, and running in circles. I don’t know how she does it – it makes me want to be sick just watching. Oh, and she’s getting hair! Finally! It’s still so fine (and very blonde) but there’s almost enough to scrape into the world’s tiniest little ponytail on top of her head. Bam Bam style.

A word on potty training, because so many people have asked: a few months ago, we had a modicum of success with Angelica using a potty. Just two or three days when she called for the potty when she needed to go, sat on it, did her business and got back off without any fuss whatsoever. We were both pleased and surprised – she just seemed to get on with it, there were no accidents, we couldn’t believe our luck! Fast-forward to the present day and – despite many encouragements – there have been no more potty sessions. I have no idea what happened – she just point-blank refuses. I think that it may have been too early, but then she took to it so well, it seemed like a very natural progression. I have to be honest, I don’t really put much effort into potty training at the moment – I was intending to do it more when the weather was hot again, so that she could run around the garden without a nappy on – but the weather has been shocking. So. I’ll keep you updated.

Baby Ted, six months old. He’s getting chunkier, but I get the feeling he’ll be a slim, tall baby like Angelica was. Is. He does have little fat rolls on his legs (so tempting to bite them) but I couldn’t describe him as a chubby baby. Despite the fact that he feeds from me all the time. It’s incessant at the moment, which has led me to the paranoid thought that I might not be producing enough milk for him. I’m trying to really get on top of my expressing, to increase my supply as well as building up a little store of milk in the freezer. He finally took a bit of expressed milk from a bottle this week, which meant that I could do a few hours on my laptop working without interruption – breakthrough! I’m going to start solids this week too, seeing as though he’s six months – I know you can start weaning earlier, but to be quite honest I’d not even thought about it until this week! Ooops. What is it you start with again? Apple puree? Baby rice? I need to get organised. I think he’s definitely hungry for some extra food!

Oh, on the hungry thing – Ted has started to physically wrestle me when he’s hungry and wants to feed. It’s quite funny, though I shouldn’t laugh, because he’s obviously starving and upset when he does it. He has no tolerance for hunger – one minute he’s jabbering away with a smile on his face, the next he HAS TO EAT RIGHT NOW. He pulls at my top with his little fists and beats at my chest and it’s actually quite hard to grapple him so that I can undo my bra and release the mammaries! 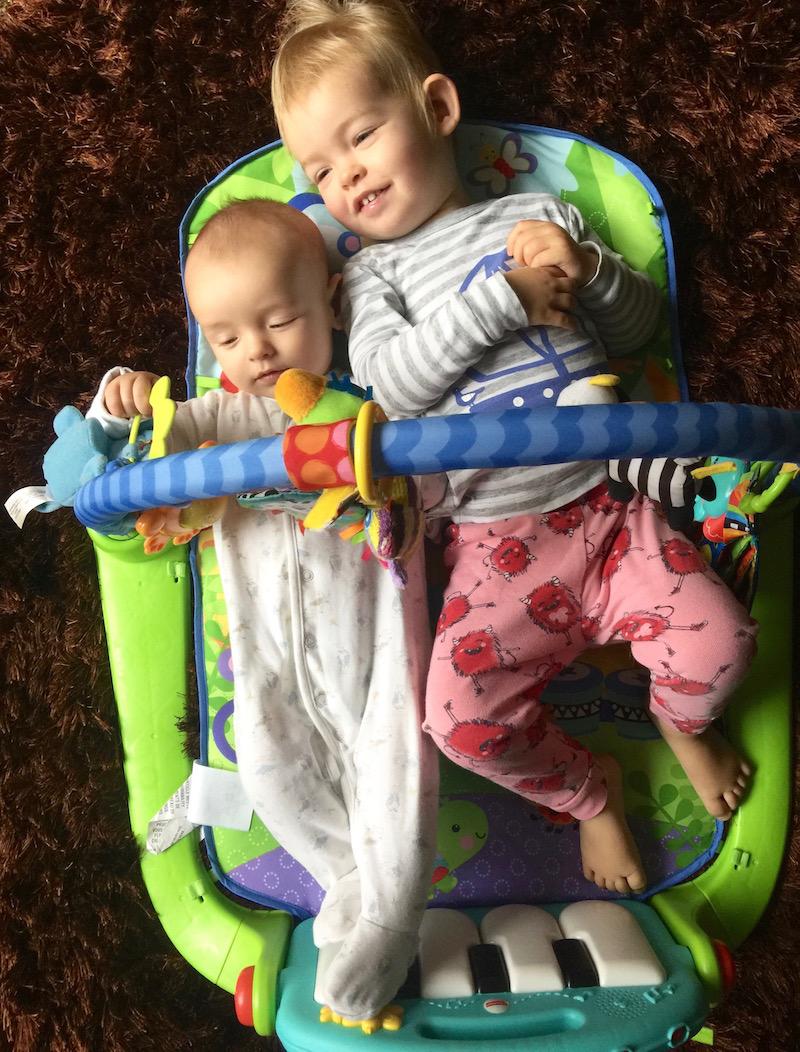 Sleep-wise, things haven’t been ideal, but I remember that Angelica was the same at this age – there was a definite rough patch before she started sleeping through. It’s not that Ted cries a lot through the night, but he feeds at about 10pm, then 1am, then 4am, then he might wake up at 6am and not go back to sleep. Or (like last night) he might feed at 11pm, then 3am, but even with this nice spacing he will still be awake by 6am. Eight hour sleeps just feel like a total myth at the moment – I can’t remember how it feels to get a proper rest. Which leads me to talk about…

I have reached peak fatigue, I think. It’s not that I can’t function, I just feel as though I can’t do anything except survive. I live for the nanny days (Tuesdays and Wednesdays) but when those days come along, I find that it’s still difficult to get motivated enough to do solid days of work. I just sort of lounge about piddling with admin jobs that don’t require much in the way of brain space, and then I eat lunch whilst staring at my to-do list, which contains monumental tasks such as “finish editing novel” and “completely re-vamp both websites”. I know: ridiculous. I’ve always been this way. Apart from in my mid-twenties when I was too busy getting drunk.

Oooh – one good thing though: in the last month, my stomach has sucked itself in by about (rough guess) an extra 40%! Really noticeable! It’s as though a pissed, partially-sighted plastic surgeon has come along in the night and given me a really, really, really badly executed tummy tuck. There’s still a pouch, it still has the texture of cottage cheese, but there’s definitely less of it. Hurrah! By lying flat on the bedroom floor and utilising a plastic shoehorn, I managed to actually squeeze into some pre-Ted jeans. For a laugh, I tried to pull on some pre-Angelica jeans but the thighs were having none of it – progress stopped around the knee area. Off to the charity shop they go!