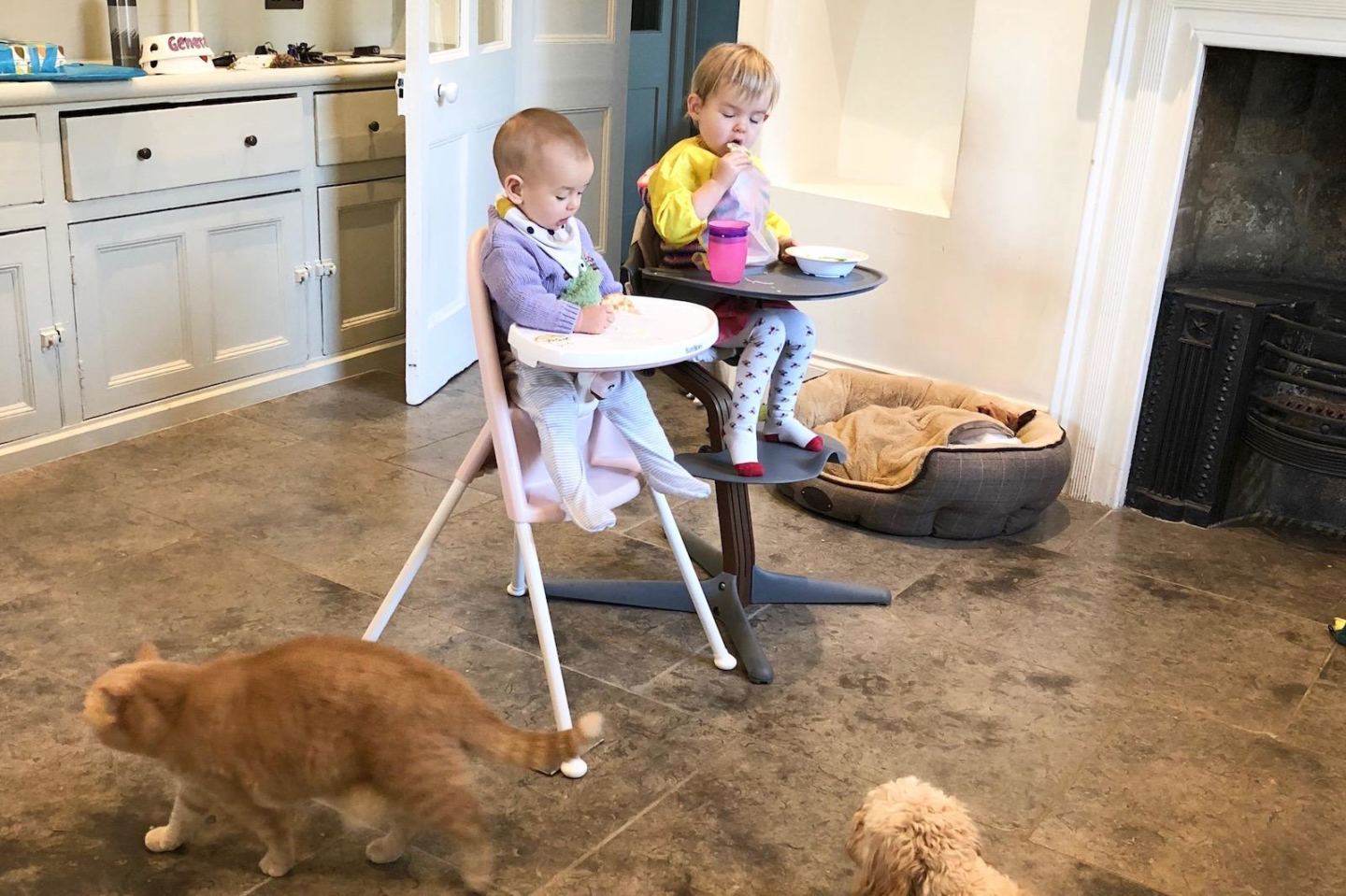 This will be the quickest baby update I’ve ever done because I have no internet and my 4G is – to put it mildly – temperamental. You should see me – I’m huddled over my laptop beneath a window in the kitchen, sitting on an IKEA kid’s chair, swearing every time my iPhone disconnects from the computer. 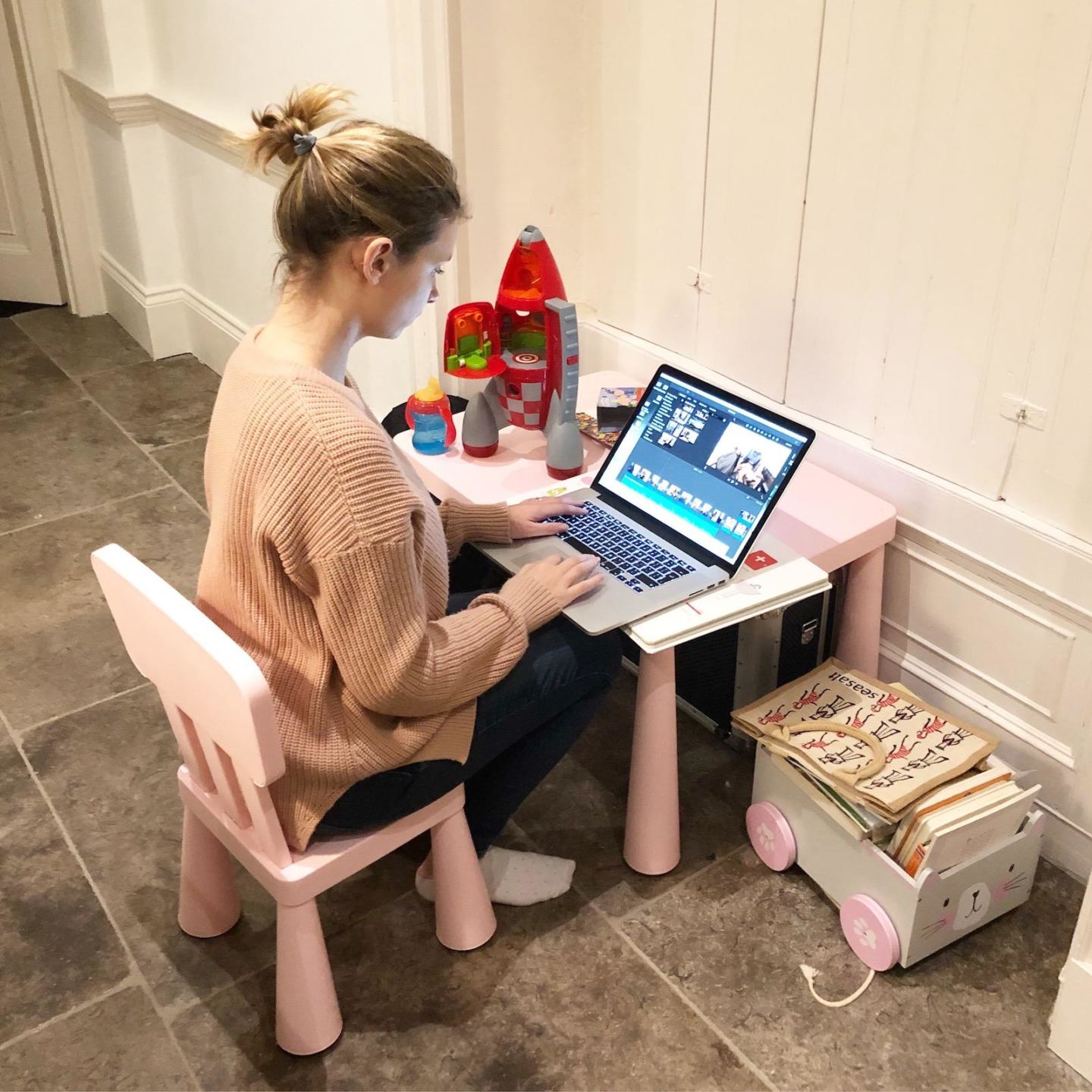 In case you haven’t twigged: we’ve moved into our new house! The permanent one. Literally. I am never moving ever again and if I even so much as hint that I have itchy property feet, I want you all to physically restrain me and delete my Rightmove app. What a total pain in the neck it all is.

But the house is wonderful and has surpassed my wildest dreams and we are happily pottering about trying to sort out rooms and find various important things such as the babies’ medical records and the cable for the telly and the sieve and my socks. (Any socks would do; I’m currently wearing some of those pop socks that they give you in shoe shops!)

Anyway, I’m sure there will be more house updating when I get back into the swing of things, but for now, let’s quickly zoom through the toddler and baby stuff. (Note, I’m probably not going to proof-read this so excuse any spelling mistakes or grammatical errors!)

Angelica is chattering away like an old granny, coming out with all sorts of little sentences and exclamations. “Hello Doctor,” she says. “Test your earholes? Test Daddy’s earholes? Then lie down please, lie down.” These innocent words strike fear into me every time – she likes to use whatever implement is near to hand when she’s playing doctors and so I’ve had the wire hook from a coathanger stuck down my ear, a shoe pushed into my mouth as medicine and a used nappy applied to my face as some sort of (I assume) hot compress. 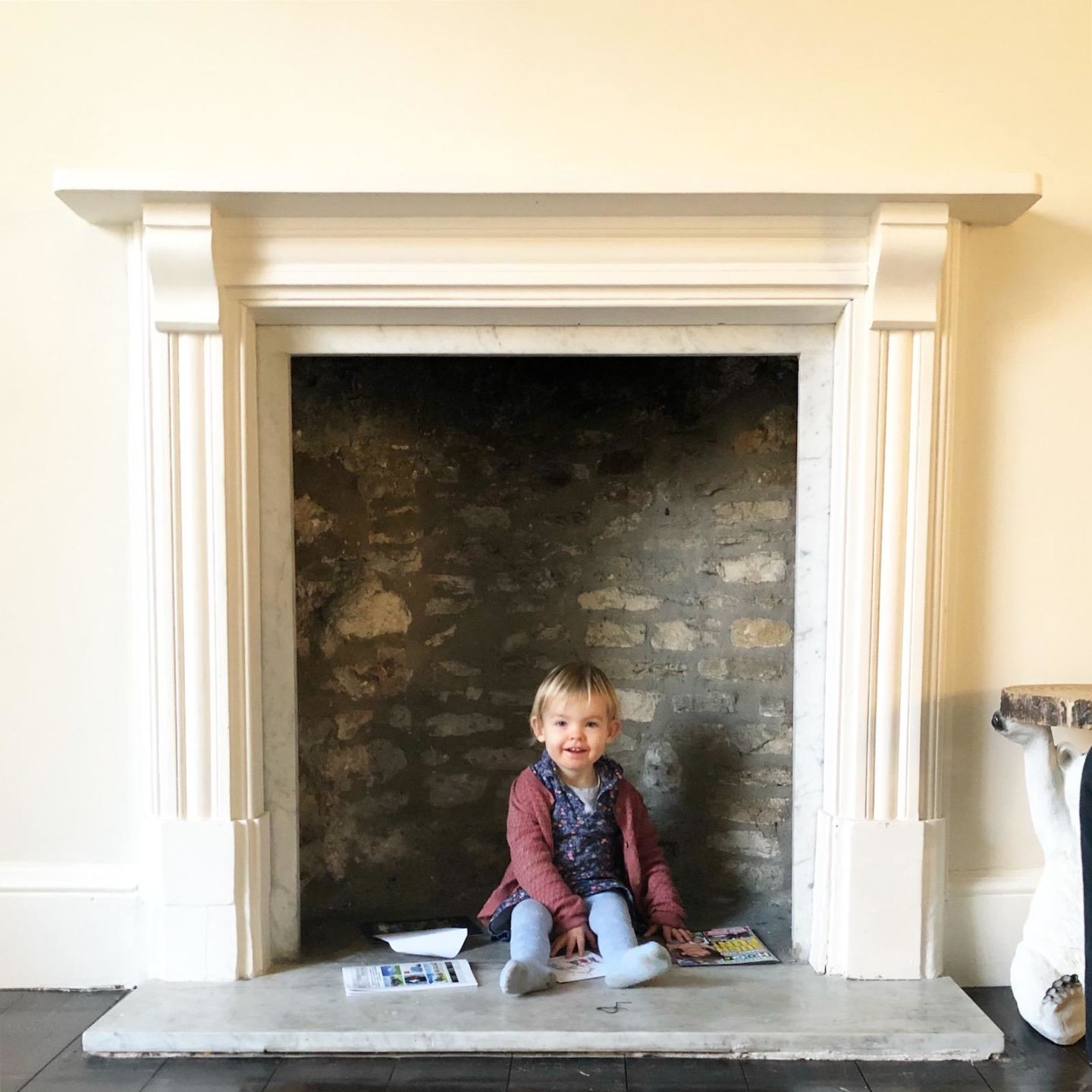 Potty training hasn’t much progressed, although we have managed to cut out the repeated post-bedtime potty journeys, which were climbing both in number and frequency. I think she’d cottoned on to the fact that we didn’t want to prevent her from using the potty when she needed it and so used it as an excuse to prolong bedtime. But two nights of being quite firm about things nipped that in the bud after a tiring, frustrating month of it, and the nappies are dry in the morning so it’s all good there. Funny that when you look back on things it all seems so obvious – why didn’t we nip it in the bud in the first week? – but when you’re in the middle of it all you’re just too tired to see it.

Talking of nipping things in the bud, or even just “nipping”, or even just nips, I think that today will be the last time I breastfeed Ted. Actually I haven’t even breastfed him, and it’s 9.30pm, so unless I cave in and do a night feed, that’s it! I was doing the odd feed every day, but with absolutely no schedule or pattern and I think that my boobs just didn’t have a clue what was going on. It all came to a head yesterday when I returned from London and felt the need to feed the baby, but when he latched on I could feel that there wasn’t much there. And then at bedtime, I fed him for forty minutes but an hour later, when he woke up crying, my husband fed him 7oz of formula. Which makes me think that he didn’t really get anything out of me at all.

We’ll see – I do love the convenience of a cheeky little night feed and it lulls him back to sleep so quickly and easily. And the comfort of it, and the loveliness of the moment… But bloody hell am I knackered. I thought that I was going to completely lose it last week, when we moved. 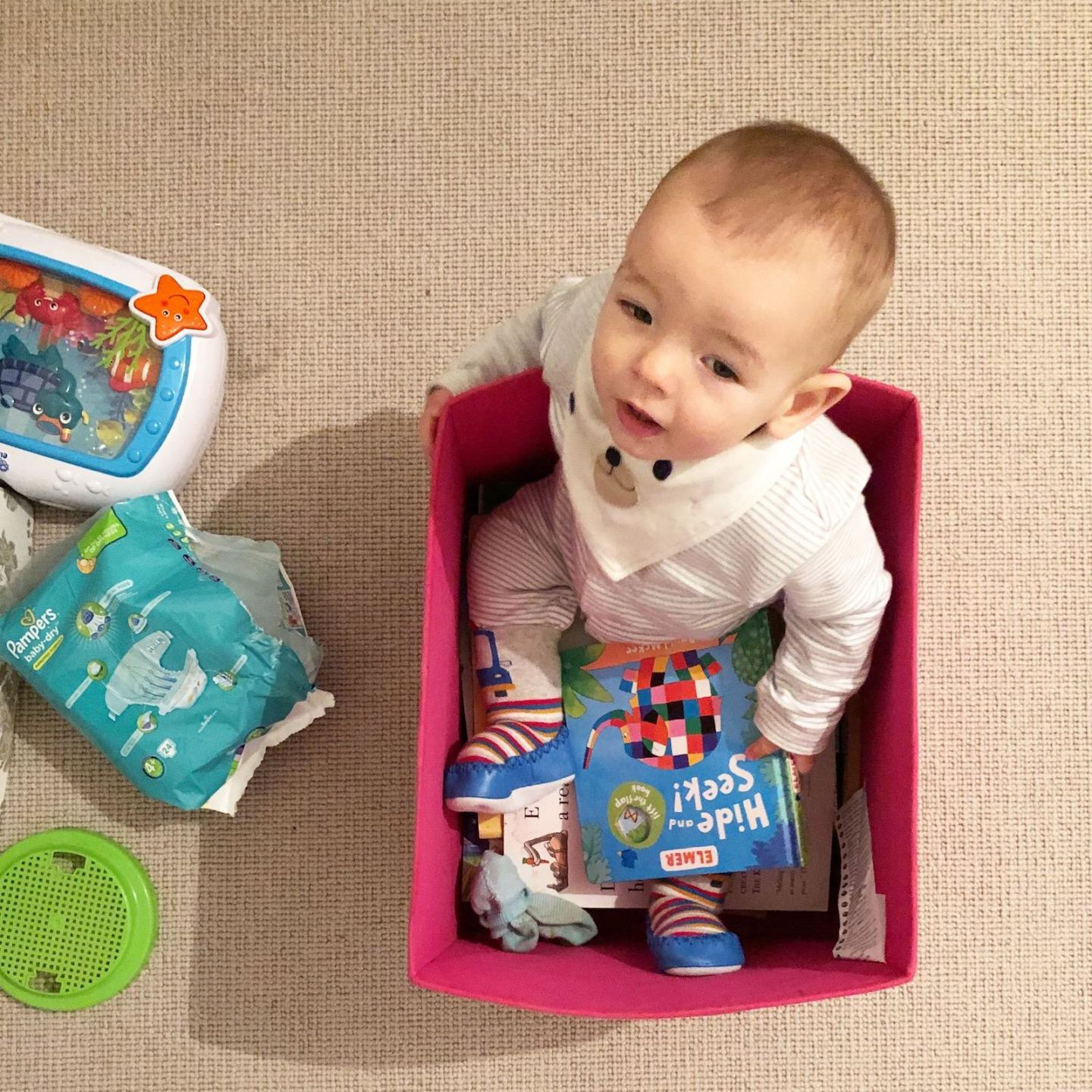 Oddities: Ted doesn’t like savoury mush. He likes hard solids, like bread and cheese and tomatoes and cucumber and so on, but he won’t eat baby food on a spoon unless it’s pureed fruit or yoghurt. Slightly worrying as it’s all sweet stuff, so I try to make him have a bit of vegetable risotto or what have you, but he shakes his head and cries until he has the fruit or yoghurt. I’m not particularly worried about the amount that he eats – he has over his recommended milk intake and sits with Angelica at every meal picking at bits from his tray – but I wonder whether his eating habits will give him a sweet tooth. Or whether it’s just a baby thing. Steamed broccoli from tomorrow, if I can get the hang of working the AGA.

(Bloody hell, what a learning curve. I thought I had cooking down, but it seems that cooking on an AGA is a completely new way of cooking. I have to say that for me, the new house having an AGA was a bit of a negative – in the same way that I avoided seeing any houses with a swimming pool, I was instantly slightly put off if it had an AGA. I am not in the game of giving myself extra work to do or making life more complicated! But I may have to eat my words regarding the AGA. Despite it costing more to run than a helicopter (probably) it does have a certain charm. It warms the kitchen and it’s always on, so you can just chuck things into it willy-nilly. Thoughts, AGA-owners or ex-owners?)

Ted is desperate to walk. To the point where he won’t bend his legs if you try to sit him down on the floor or put him in his highchair; he straightens them out and locks them rigid, making it impossible to do anything other than hold him upright and allow him to do his walking practice. Which is great unless you desperately need to answer the door or stop the dog from eating the cat’s sick or whatever. Ted has no interest in crawling, in rolling, even in pulling himself up to hold onto tables or sofas – he just wants to walk. Oh God. And he’s so strong! When he kicks at nappy-changing time you have to seriously try and dodge his legs otherwise you’re covered in bruises the following day.

He has four teeth – two top and two bottom, obviously – and a gap between his top teeth that’s bigger than mine. He has such a good nature, apart from when he’s hungry in the night when he screams the house down, and his favourite thing is to be thrown up and down.

OK, that’s the eighth time that my 4G has disappeared so I’m rounding this up now. Body-wise, no change: still eating a Magnum (almost) every day, still have reasonably large boobs but on the deflate, still exhausted and looking forward to the night where I get more than four hours sleep in a row! Stress levels have been ridiculous – I’m thinking of taking off quite a few weeks over Christmas, just to recharge and refresh. Come back a more relaxed and productive person. Give myself time to recuperate and read and have baths and organise the kitchen cupboards. What do you think?