I’m writing this in a snatched bit of time before bed; New Baby Ted has dropped off unexpectedly early and so I’ve been racing through a long list of admin so that I can go to sleep with a clear mind! So let’s not spend too long on the pleasantries and cut straight to the chase: the two month update for Angelica, Baby Ted and Me.

Angelica, now 21 months, seems to learn a new thing every day. It’s absolutely fascinating and a constant source of amusement – everything from impromptu, crazy dance moves performed in public to little garbled sentences executed with such enthusiasm it’s impossible not to smile. Her vocabulary is growing in size and she has started to pronounce quite a few words properly – it’s always a surprise, like making alien contact, when she comes out with a perfectly spoken new word. “Hair Mama,” she said, the other day, and pointed at my hair. I almost fell off the bed with shock!

And her understanding is just brilliant – or I should say her misunderstanding? I love the way that she sees everyday things with completely fresh eyes, things that make total sense to an adult but must just seem bizarre to a child who is still learning how the world works. The latest thing is baby bottles – she has a plastic baby with a bright pink bottle, and she feeds the baby its pretend milk. She also has milk herself in a bottle (I know, I’ve tried to change it to a cup but to no avail!) and so she’s now associated babies with bottles. So yesterday, when I said “I need to feed Baby Ted”, she took her little plastic bottle, pulled down my top a bit and tried to put the bottle at the end of my nipple! She obviously thinks I have little mini-bottles inside my bra and that’s what Ted’s nuzzling away at…

So sweet. But at the same time incredibly demanding. I’m not sure whether bringing a new baby into the fold has accelerated certain behaviour – not bad behaviour, necessarily, just… boundary-pushing. “No” is the favourite word, and has been for some time now, and Angelica knows exactly what she wants to do and when she wants to do it. Thank God my husband is the most patient person on earth, because I am really not patient at all, especially when I’m trying to calm a screaming newborn at the same time as catching a bowl of pasta that’s flying from Angelica’s highchair! 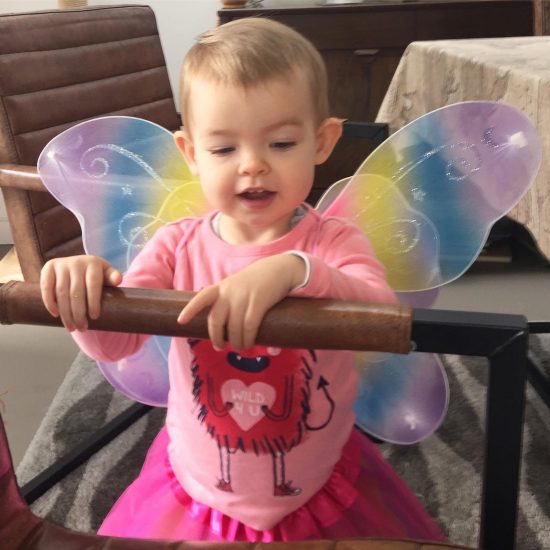 I really enjoy my time alone with Angelica, when Ted is asleep and I can concentrate on her fully. It was a massive source of guilt for me when Ted was just born and I was stuck in bed recovering – I could hear Angelica, but I couldn’t really see her, because I was so tired and felt so ill and just wanted to sleep. So being able to pick her up and swing her about and take her to Tumble Tots is just brilliant, I love it. Hard work, especially when you’ve been up with a newborn for half the night, but incredibly rewarding to be interacting with a little human who’s soaking up all of the things going on around her and processing them in weird and wonderful ways.

New Baby Ted, two months old today, has turned a bit of a corner in the last couple of weeks and I’m getting far more sleep overnight. Hurrah! Often he sleeps for six hours in a row, which apparently is almost considered to be sleeping through the night. I’m sure, thinking back, that Angelica did the same and then regressed at four months, then woke every two or three hours until she was eight months. I’ll have to look back at my diaries! And I must also do a post on things that feel depressingly permanent when you have a new baby – sleepless nights, constant winding, difficulties feeding – but that soon change without you even realising.

I was having problems with Ted getting loads of trapped wind, but it is a lot better now, and he hasn’t been sick properly in weeks. Had I mentioned that he was being sick? Not all the time, just once (but a lot) every other day or so. It stressed me out loads, because I felt I couldn’t really go out with him in case he vommed all over me, or someone else, or in the pram or car seat, and so I did some research (and health-visitor-questioning) and made two major changes. The first was to raise the head of his crib so that he was lying in a slightly raised position rather than totally flat. This was the HV suggestion – I just wedged two large, heavy books beneath the runners of the Snuzpod. And almost overnight, Ted’s weird croaks and throat-clearing stopped. And he settled far better after night feeds – no three hour grizzle sessions!

The other major change I made, after reading quite a lot of articles and comments online, was to cut out milk. I’d been drinking tonnes of the stuff, because I did during pregnancy and simply didn’t change the habit. If you’re a long-term reader of A Model Recommends you’ll remember that I cut out milk after months of suffering with adult acne, and my breakouts stopped almost instantly. Now I don’t know whether it’s a coincidence, with Ted, but the day after I stopped with the epic milk consumption, he completely ceased his vomiting. I mean, he hasn’t vommed properly since. Can that really be a coincidence? It definitely wasn’t with the adult acne – I still get spots now if I have too much proper milk. (I seem to be fine, skin-wise, with drinking that Lactofree stuff!)

Has anyone else found that cutting out excess milk or dairy has helped with their breastfed baby? I’d be interested to know… 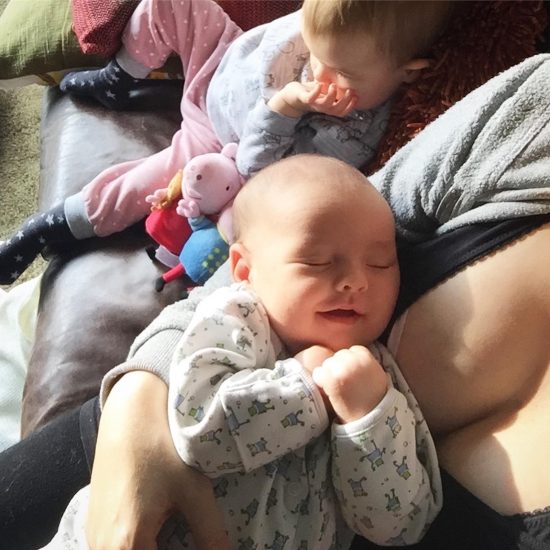 What else to report with Young Ted? He’s a lot more alert, and has started to make those lovely cooing and gurgling sounds. I am completely smitten, he’s just so cute. And, for the most part, very calm and chilled out and quiet. He just has his one crazy time every day, for a few hours, and my husband and I both go a bit potty, but we get through it and we know it’s just a phase. (Tell me it’s just a phase! HA!) I remember that Angelica had precisely the same manic time every day – from around 6pm until bedtime. Quite trying when it’s right over your relaxation period, and when you eat your evening meal, but it’s better than having the same fussy period happen overnight! Thank God for small mercies!

How am I, two months in? Well, the caesarean scar is healing very nicely indeed, perhaps thanks to my silicone sheets (see post here) or maybe because it was sewn so neatly? I also feel very lucky that I haven’t – touch wood – had any problems at all with breastfeeding. I think I’ve used the Lansinoh cream twice and both of those times were right at the beginning. So after a pretty shitty first few weeks, when I felt that every part of my body had something wrong with it, I now feel very much back in the swing of things and I’m getting stronger every day, gaining great satisfaction when I do something new like push the pram up the hill or run up the stairs to fetch something. It’s great having full mobility again, being able to bend down to pick things up or load the dishwasher, being able to change the baby’s nappies without getting backache or worrying about pain in my abdomen. I have to say that I’m in a great mood. A far cry from how lost and overwhelmed I felt at the beginning – I’m really enjoying even the smallest achievement, and I’m more at peace with how the whole “two under two” thing works. Basically, you just have to get on with it and take it one day at a time. Have no – or low – expectations and if you have to have a to-do list, don’t put more than three things on it!

Right, I have loads more to say but I must go to sleep as it’s going to be midnight soon and I’ll be kicking myself tomorrow when I’m knackered and looking like an old hag. I’ve jotted down the things I still want to talk about and I’ll cover them in other posts. Stay tuned!