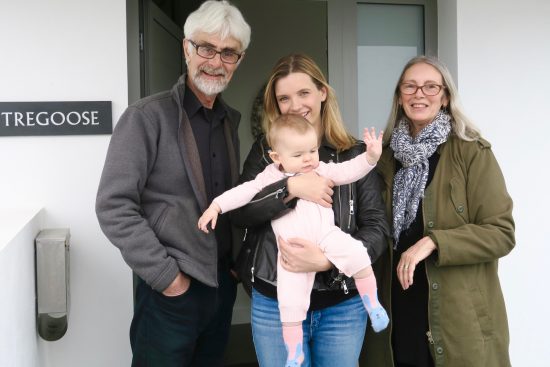 Spend a week at Tregoose, a light and spacious house on a hill looking over the beautiful beach at Polzeath, and you’d quite literally have the thighs and bottom of a Victoria’s Secret model. The road to the beach is short but satisfyingly steep; one return journey each day and you’d be doing some serious toning-up in the lower regions – add a pram into the mix (only if you have baby, obviously, otherwise that’d be weird) and you would have, after just one week, buns of steel.

I was invited to stay at Tregoose by Perfect Stays, who specialise in luxury holiday properties in Devon and Cornwall. It was supposed to be a huge family affair, with sister, brother, both in-laws, a niece, a dog and a baby. And the house, which sleeps twelve, would have easily accommodated us all without even needing to convert the television room. (Fortunately, because Mr AMR liked to use that as his escape hideaway, lying on a giant beanbag and messing around with computer games.) There were three double bedrooms and two bathrooms underneath an absolutely huge reception room, as well as another bedroom with en suite down a separate stairway, with doors leading into the garden. A self-contained suite, almost; perfect for people who want a bit of distance from the hullaballoo of the communal areas. I’m probably not explaining this layout very well, but if you like floorplans (I am obsessed with them, being a Rightmove fanatic) then you can see theirs here.

I talked about “cost per person” in my previous Perfect Stays post and don’t want to repeat myself for fear of boring you, but to put things neatly, their properties offer luxury accommodation at the fraction of the cost of a hotel. My words, not theirs. If you’re going away as a couple and are on a budget, then it’s perhaps not the best choice (most properties sleep eight or more, some would house an army) but if you’re away en famille then it’s a true no-brainer. Houses start at around £1000 for the week off-season, but divide that by three, four, five, even six couples and you have an amazingly cost-effective luxury holiday. I have to say that I felt rather sick about the fact their kitchen was so, so much better than mine. And I’ve only just had my “kitchen of my dreams” done – or at least it was my kitchen of dreams, until I experienced the one at Tregoose, with its million different utensils and pans with thermometers on the lids and cabinetry with dark wood interiors. (Why didn’t I opt for dark wood interiors? Fool!) 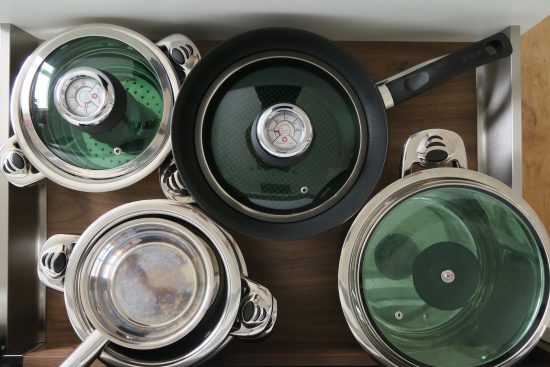 But on the other hand, why go on holiday somewhere that’s not nicer than your own house? I mean, this used to be a massive bugbear of mine: hotel rooms that cost the earth but simply weren’t as nice as my bedroom. Why leave home? Unless it’s for some kind of stupendous location, in which case, fair enough. But if you’re staying somewhere for a while, it’s nice to be wowed by the facilities. 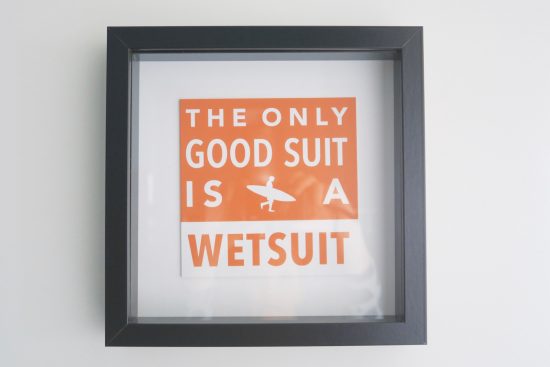 If you were a surfer, or wanted to learn to surf, or had kids who surfed, or wanted to learn to surf (I’d exhaust all combinations here but have to put the tea on) then you’d be double-lucky at Tregoose because a) it’s in Polzeath, surfers’ paradise and b) the house comes equipped with a special downstairs surfing antechamber complete with its own HUGE walk-in shower (don’t worry, the house has three others), laundry facilities (extra to the main house laundry room) and heated wetsuit rack. Yes: a heated wetsuit rack. Little radiators in the shape of headless humans that dry and then warm your wetsuit for you, ready to put on the following this day. 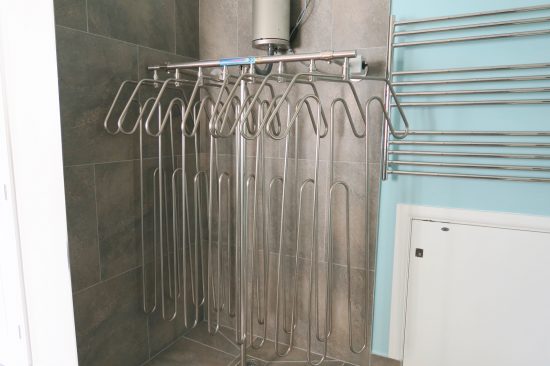 Does this negate the need to urinate inside it to keep yourself warm? I don’t know, I have never worn a wetsuit. Honestly, I never intend to either – I’m about as agile as a brick.

For the non-surfers, plenty of space in which to sit around and/or drink wine, including a massive living room, a dining table that would seat the United Nations and an outdoor terrace, sheltered from the wind by a clever glass partition, opposite another terrace that’s roofed-over and has a sign saying – appropriately – Gin O Clock.

Polzeath is within walking distance (if you’re a keen walker!) of my favourite place, Port Isaac, home of the Doc Martin ITV series; but if you’re beachy then you won’t even want to bother leaving the area. Tregoose isn’t right on the coast, as in “hanging on a cliff edge” – the sea view is broken by a couple of rows of houses in front of it, staggered down the steep hill – but blimey. It’s a pretty stunning view when you’re doing the washing up. (Why you’d be doing the washing up when there’s a dishwasher I haven’t a clue, but moving on..) 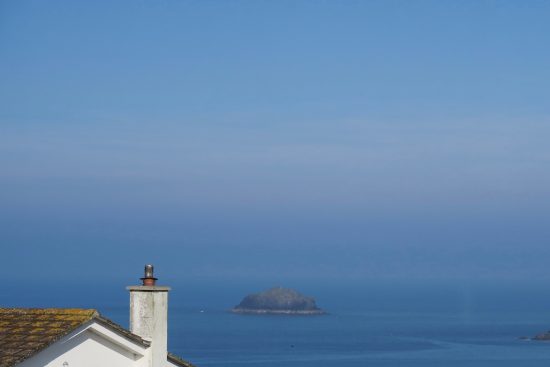 If you’re not on kitchen duty then you can also see the view from the front part of the living room and the front balcony, which is accessed through massive glass doors. Another place to drink the aforementioned wine – add it to the list!

The only thing that this house is missing is a telescope or pair of binoculars with which to admire the view and spy on surfers. But all is forgiven – considering that it has literally just this moment been let out to the public, I can’t think of anything else amiss. This is holiday house-ing at its best – a fresh cream tea on arrival, all of the spices and condiments you could wish for pre-stocked in the pantry and milk, butter, bread, eggs and bacon in the fridge. Thank you Tregoose, that will do nicely. 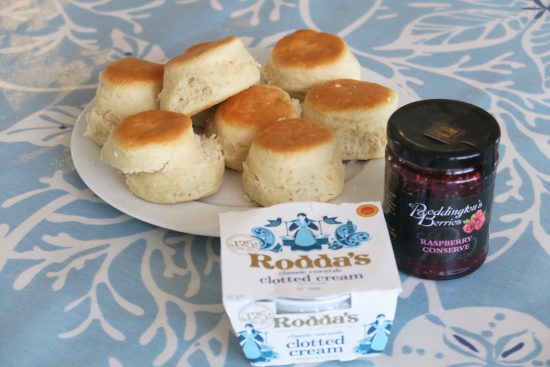 Stays at Tregoose start from £1600, climbing steeply in the summer months – with four double bedrooms and a convertible snug, there’s a possibility that you’d only be paying just over £300 per couple for the week off-season. Two of the bedrooms also have an extra single bed (built-in affairs with exciting ladder access!) if adults don’t mind bunking up with their kids, but there are all kinds of unzipped/zipped-up bed combos if you want twin rooms rather than doubles.

You can find all of the info on Tregoose here. If you want to see what I got up to in Cornwall (briefly) then my vlog is here. My mum has also written about our stay, you can read her thoughts here.

*We stayed as guests of Perfect Stays.