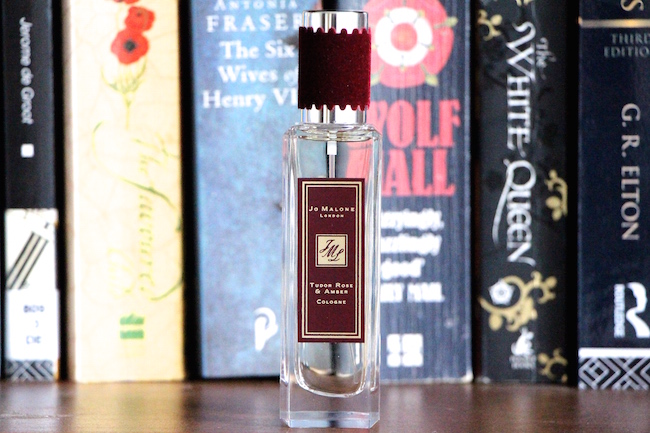 Now that’s a weird old picture, isn’t it? Sorry Jo Malone London, it does absolutely nothing to show off your splendid perfume packaging! But this post was always going to be more about books than fragrance, so in a way, the rather muddled imagery is quite apt.

It’s World Book Day today. As a voracious reader (I love that phrase, despite its rampant overuse by just about everyone in the world) I thought that I’d recommend some brilliant books. And because I’m so interested in the Tudor era (interested is an understatement: obsessive is probably more accurate) I thought I’d pull out some suggestions for good historical fiction. Books that transport you straight into the stinking, rat-infested streets and the dangerous courts and the boudoirs of trembling Tudor brides. Some of the novels lean towards the “bodice-ripping” genre, others are long-haul reads that take a lot of thought and close attention: all of them are absolute page-turners. Here’s my shortlist of favourites:

Philippa Gregory‘s The Other Boleyn Girl, and pretty much every one of her Tudor novels since. (I see that there’s a new one out next week, The King’s Curse: I already have it on pre-order! You can get it here.) What I like about Philippa Gregory is that she writes from the perspective of female historical figures, and there is quite a lot of allowable poetic licence when you write about the ladies. Often there was very little recorded about these women and certainly not a lot was known about their personal feelings or inner lives; it means that Gregory almost has carte blanche when it comes to creating and embellishing her characters’ lives. She’s been publishing bestselling Tudor novels for years now, and I have to admit that some of them can be a bit formulaic, but I still look forward to every new release. Find her books here.

CJ Sansom‘s Dissolution and the five Tudor novels that follow: absolutely unputdownable. Actually the first novel, Dissolution, was my least favourite – books two and five were my most – but it must have been good enough for me to want to read the rest, so don’t let my opinion put you off. Sansom’s novels follow a lawyer, Shardlake, as he gets himself embroiled in terrible murderer-hunts and dangerous political affairs. The activities of King Henry VIII act as a kind of rich historical backdrop for these thrilling “whodunnits” and the books span a great number of years, so you start off in the Anne Boleyn period and end up, by the end of the sixth book, with a dead King. (No spoiler alert necessary, we all know that he died. He’d be bloody old if he hadn’t…) I most highly recommend the Shardlake books – you can find them all on Amazon here.

Hilary Mantel‘s Wolf Hall and Bring Up The Bodies. When I mentioned long-haul reads, it was these I was referring to. I did my MA dissertation on them and boy, are they dense! But after all of the Tudor fiction that’s been churned out over the past few decades, Mantel’s writing is a breath of fresh air; she makes the whole era seem new and almost unfamiliar. Cromwell is an interesting choice in terms of narrative perspective – widely considered to be a total monster and completely unpalatable – but Mantel brings you round to his side, you find yourself championing him. The writing is beautiful, the dialogue sharp, the historical detail breathtaking… You can find Mantel’s novels here. The third book in the Cromwell series is due this year.

There are other series – Diane Haeger’s, for example – but the above are my favourite. Antonia Fraser’s The Six Wives of Henry VIII is something of a must if you’re a Tudor Fanatic, find it here, but it’s biographical rather than fictional and much more fact-heavy. Talking of Tudor Fanatics: I’m about to shoehorn in a fragrance review! 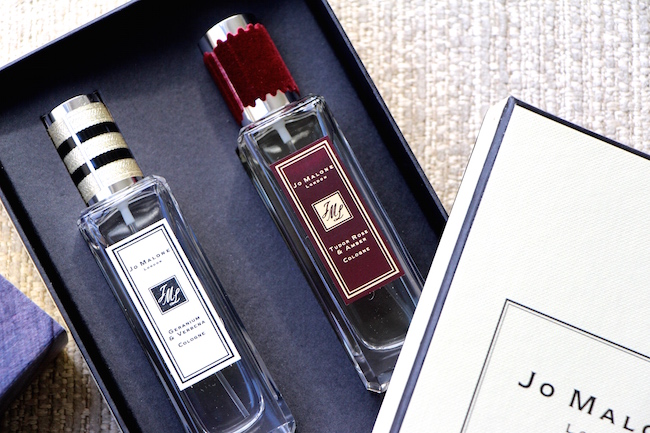 These little beauties are from Jo Malone’s new Rock the Ages collection: Geranium & Verbena Cologne and then – this is where the tenuous link is! – the gorgeous Tudor Rose and Amber. Obviously I grabbed the Tudor Rose straight away, pleading with the big man in the sky that it wouldn’t have undertones of Clove, Dung, Parchment or Leather Breeches. Not to worry; it’s actually quite a clean-smelling rose, clean with hints of danger. There is clove, but I don’t really get much of a hit – it’s more the warm amber and then something a bit musky and spicy.

It’s very nicely layered-up, this cologne; like a freshly-powdered lady on the surface, all rosy and neat, but one who’s hiding some secret under her many skirts. Maybe a man, with a machete, or some kind of precious manuscript. Let’s be honest, they could have hidden anything up those dresses…

The Geranium and Verbena is also great- very Springtime, very green, but I’ll be back with more on that one soon. In the meantime, you can find all of the Rock the Ages colognes at JohnLewis.com here – they cost £42 each.