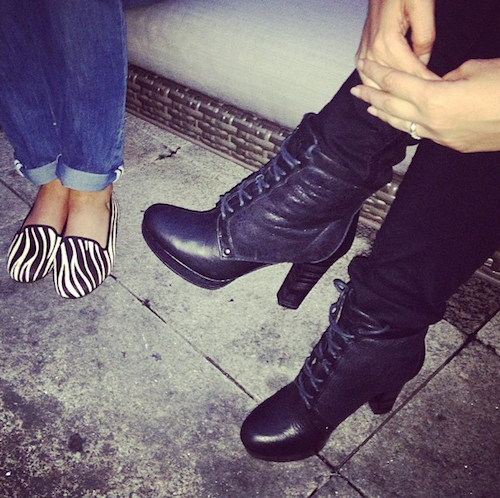 This year’s Comfiest Fashion Award (if there is such an award – if there isn’t, there should be) goes to the UGG Shezbie. The only genuinely comfortable high-heeled footwear that I’ve tried. These babies got me through two days at London Fashion Week, including cobble-walking (aka dicing with death, see Ways to Die at Fashion Week) and running for the number one bus.

These boots are like walking around in slippers. Fully lined in sheepskin and cleverly shaped so that you don’t end up throwing all of your weight forward. Of course you know you’re in heels – it’s not like shuffling about in your fur-trimmed flats! – but there just doesn’t seem to be any particular inconvenience. The thought of having to walk up the hill rather than wait for a bus doesn’t seem like the absolute end of the world. Having to negotiate a puddle doesn’t require serious manoeuvres such as grabbing onto the arm of a complete stranger so that you don’t lose balance. Things whilst wearing the UGG Shezbie just seem…doable.

Obviously you wouldn’t want to complete an SAS assault course or hike up Ben Nevis, but for everyday stints into town they are just perfect. And they look cool! I had three separate comments about these within ten minutes of arriving at the shows, to which I responded, far too loudly, I’m sure, “THEY’RE FROM UGG! UGG THAT DO UGG BOOTS!” The boots look good with black skinny jeans and a leather jacket (pretty much what I live in, so that’s a bonus) but will be equally handy to throw on with tights and dresses when the weather gets colder.

What do you think? If you go past an UGG store then definitely try these on and let me know. I’m guessing that you won’t want to take them off! You can find the Shezbie online here – they cost £195. (Or, inexplicably, £280 on Amazon!)