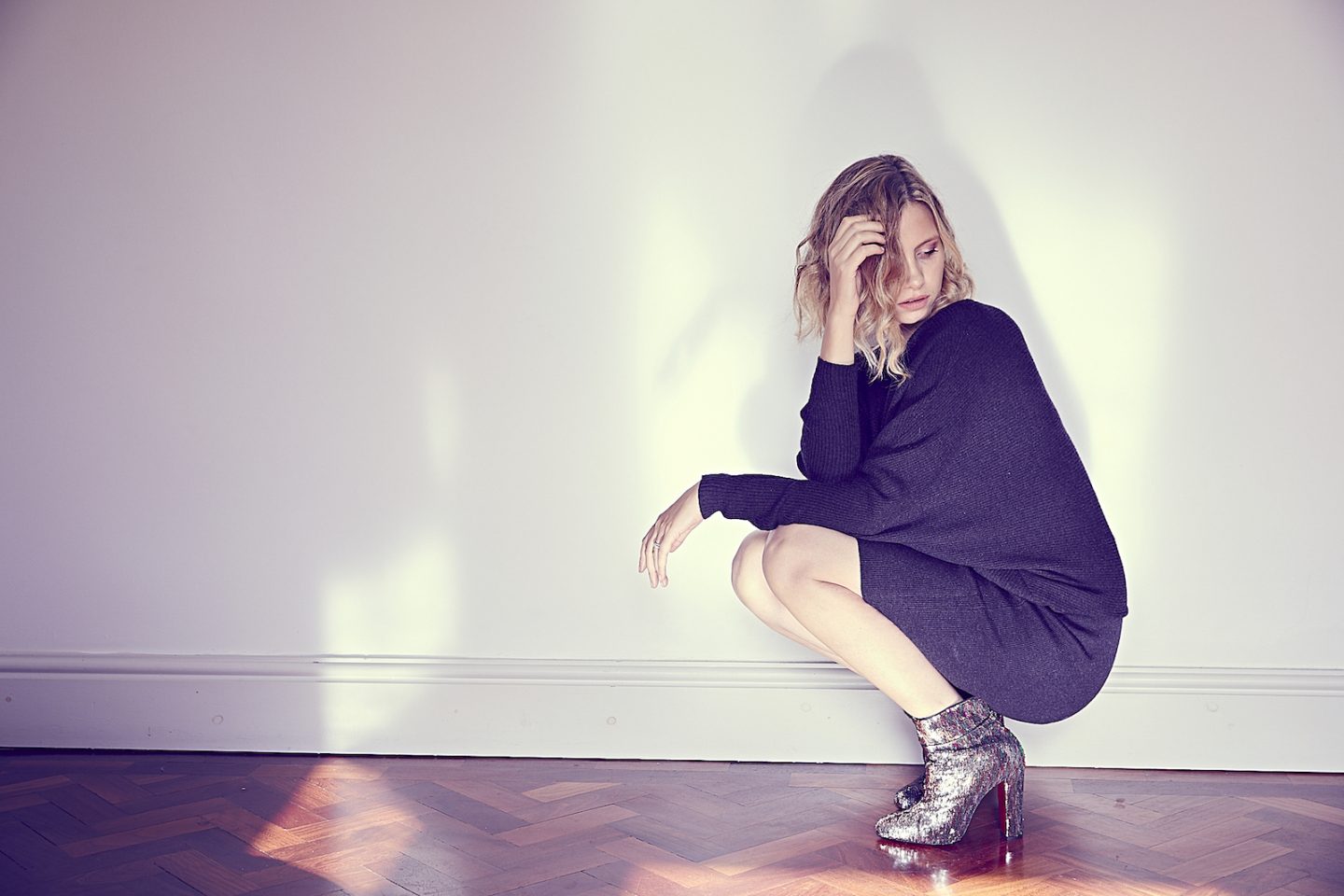 I didn’t realise when I wrote about my new Louboutin Moulamax boots that they already had a bit of an online reputation. They received quite a lot of press coverage earlier this year, pre-launch, when stylist Samantha McMillen posted an Instagram showing what happened when she ran her hands over the sequinned finish. The sequins flipped from silver to rainbow as her fingers moved over the surface of the boots, and she dubbed it “unicorn skin”. 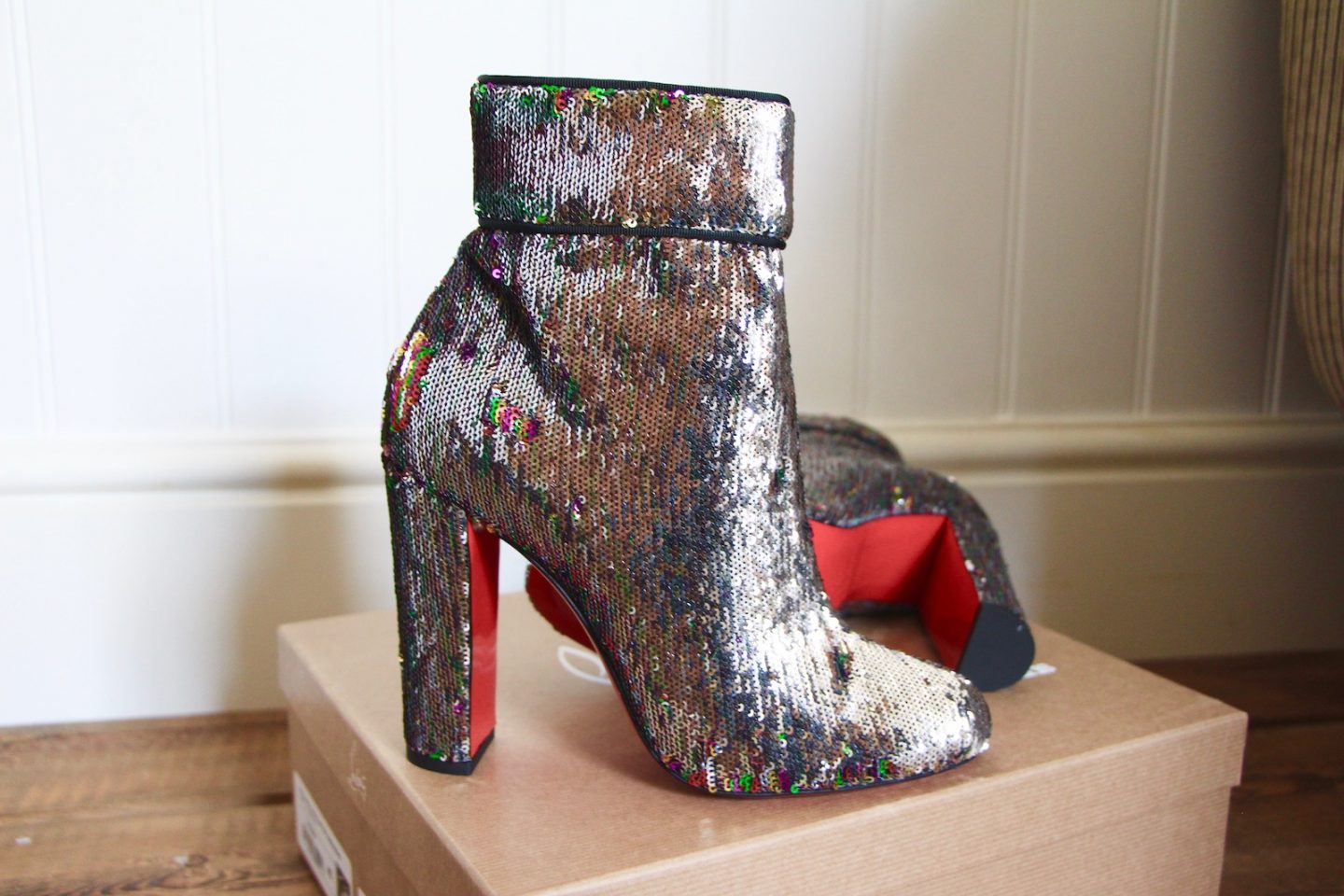 That somehow passed me by – perhaps because I have developed an inbuilt filter that mutes any mention of unicorns, mermaids and cupcakes – but here I am nonetheless, many months later, the proud owner of some pretty outrageous disco-tastic sequinned boots. I’ve fallen more in love with them as the week has progressed, partly due to the fact that I can now – after a bit of practice – walk in them without adopting that weird, bent-over posture that you have to do when you’re wearing heels that are too high to handle. You know when you look as though you have a lower back pain problem and/or an invisible bank safe strapped across your shoulders? I am now fully upright in them and only totter when something small, like a toddler or a cat, darts between my ankles. 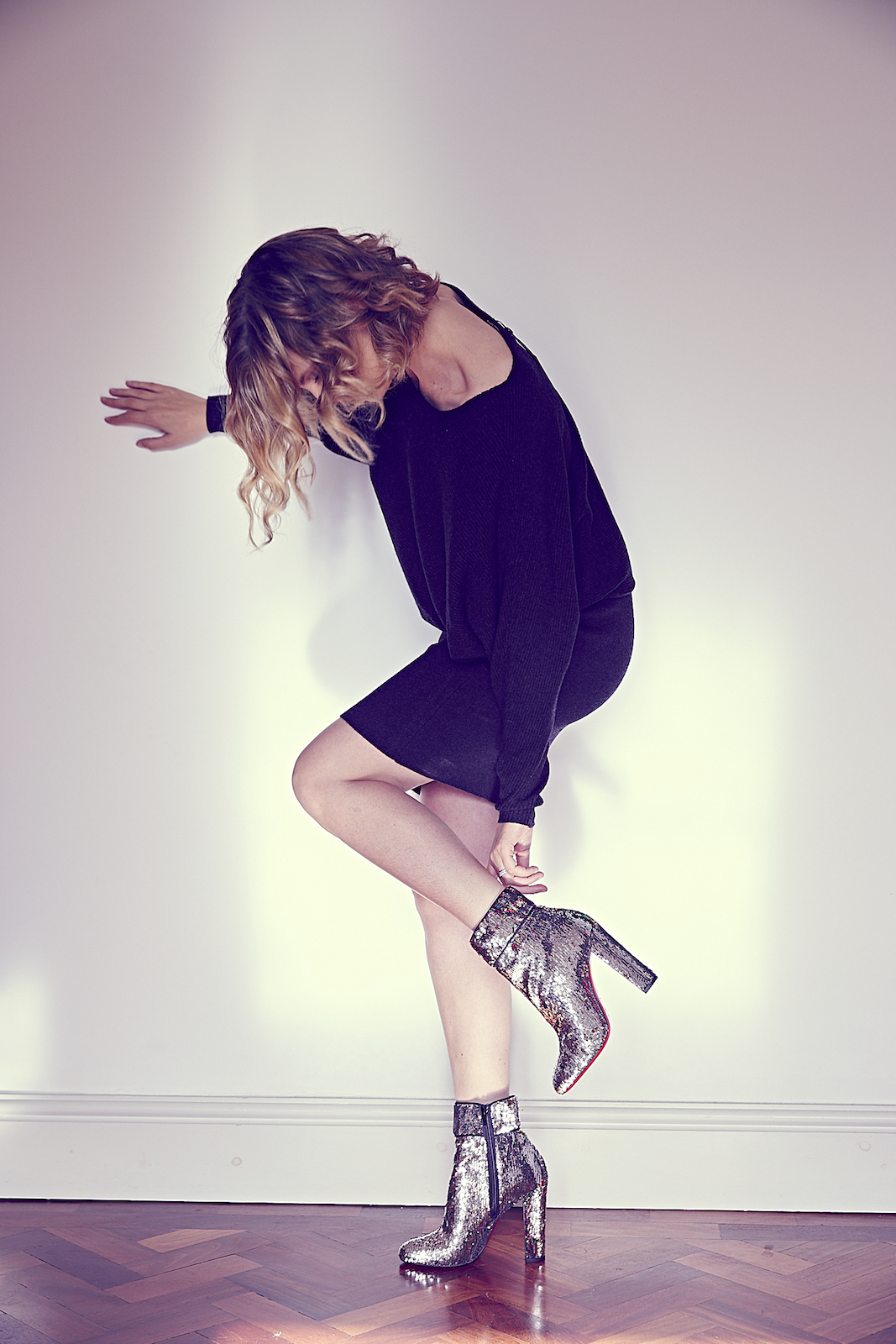 So yeah, the Christian Louboutin Unicorn Boots are getting better every day. And now I know what  I’ll wear them with, it’s only a matter of time before they actually make it out of the house. As promised, I’ve done some outfit photos with three different looks – casual, semi-sexy and glitzy – so that you too can wonder at the sheer versatility of a sequinned boot.**

First option: unicorn boots thrown on carelessly with just a pair of pale blue jeans (my default denim of choice) and a grey cable-knit jumper. 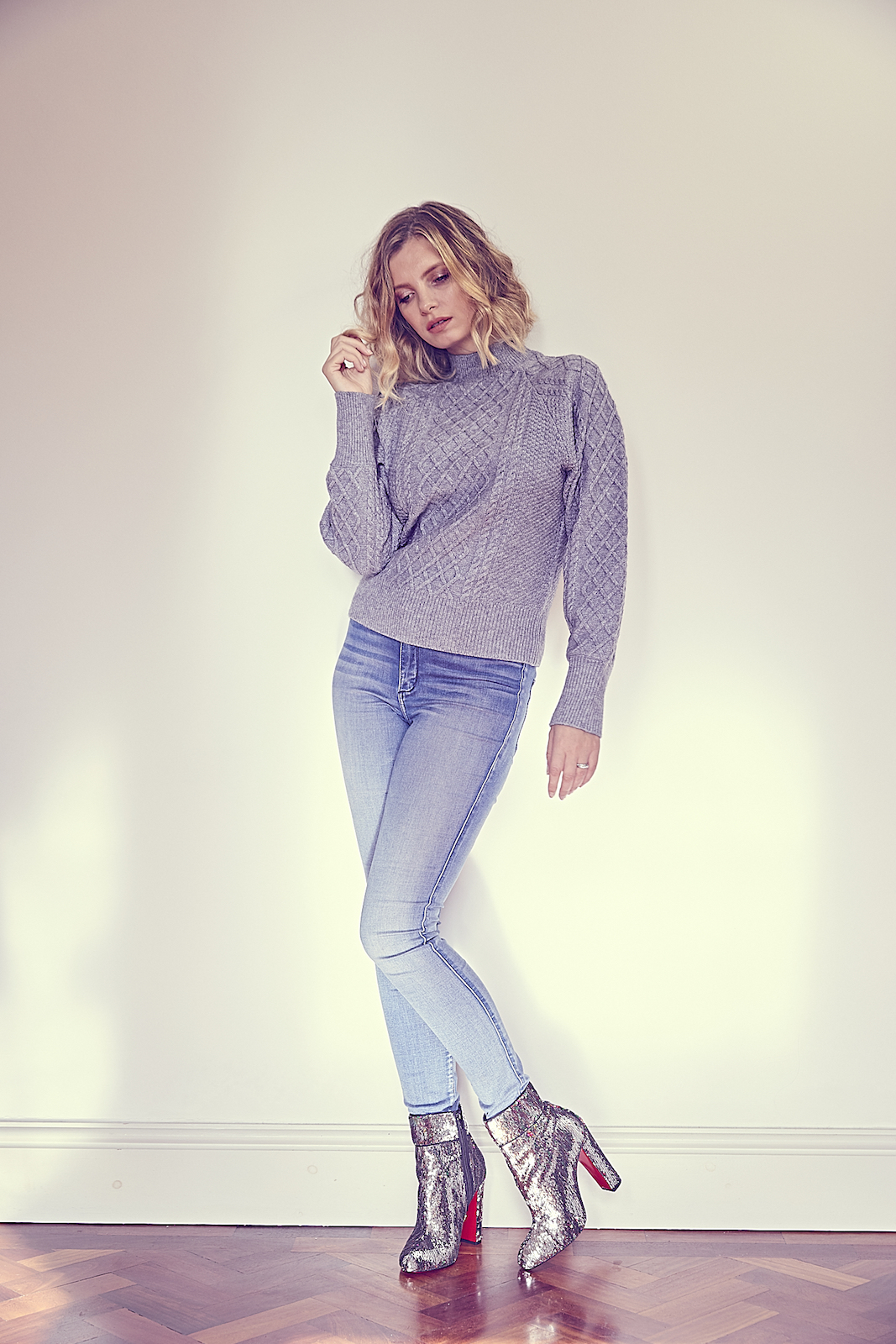 The jeans are oldish Abercrombie & Fitch ones, but I think they are identical to the Simone ones here. The jumper is from Vero Moda at ASOS here* – it was £38. 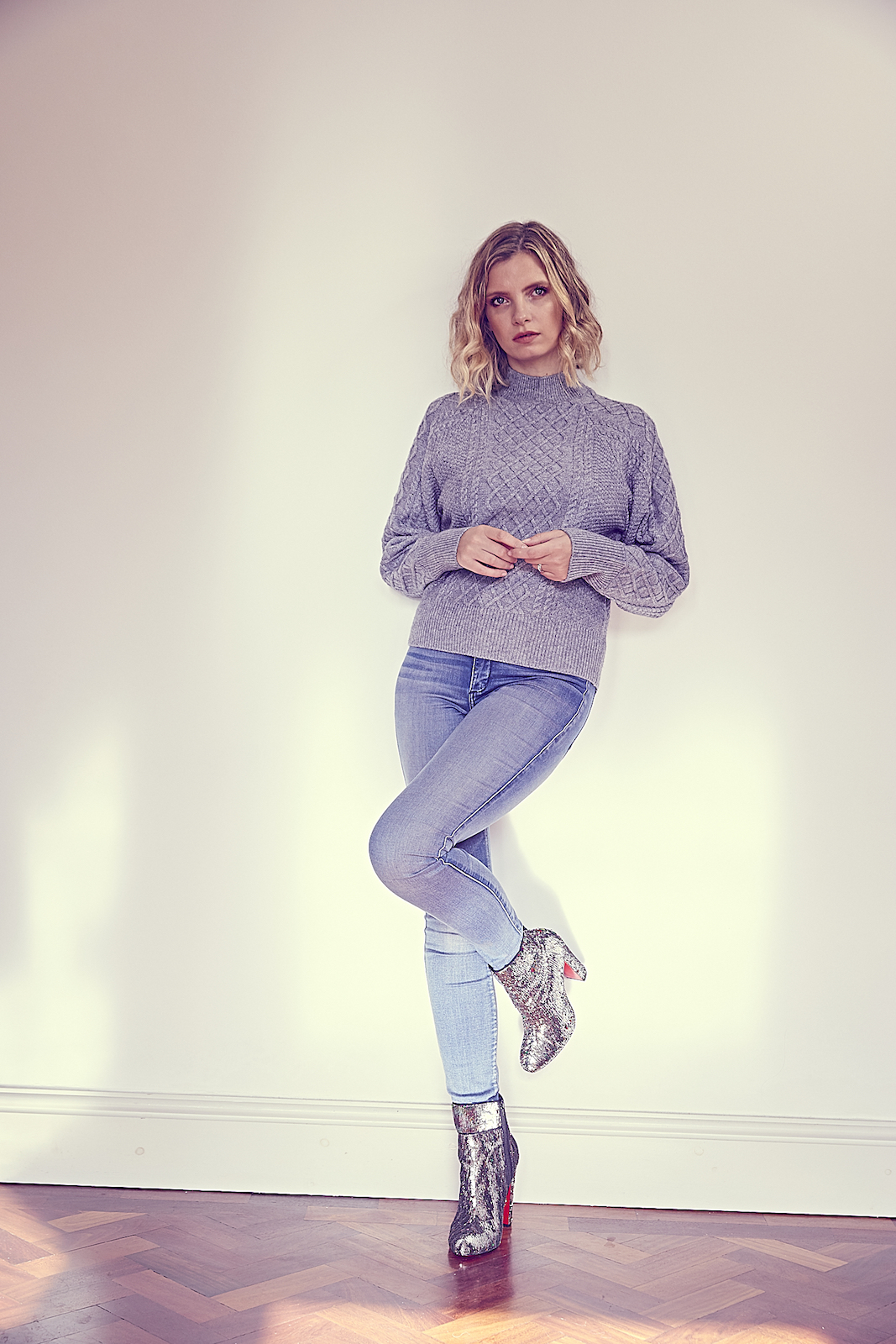 I do love a bit of fancy footwear with a completely pedestrian outfit. It’s like grey cashmere with red lipstick – just one surprising, bold feature that jumps out but at the same time seems so effortless. If you were afraid of looking too “done” in your glitzy disco-ball boots, then this would be the way to wear them.

The semi-sexy outfit is also an option for the cautious fashionista, and it starts with a dress that flatters but has nothing of the bodycon about it. 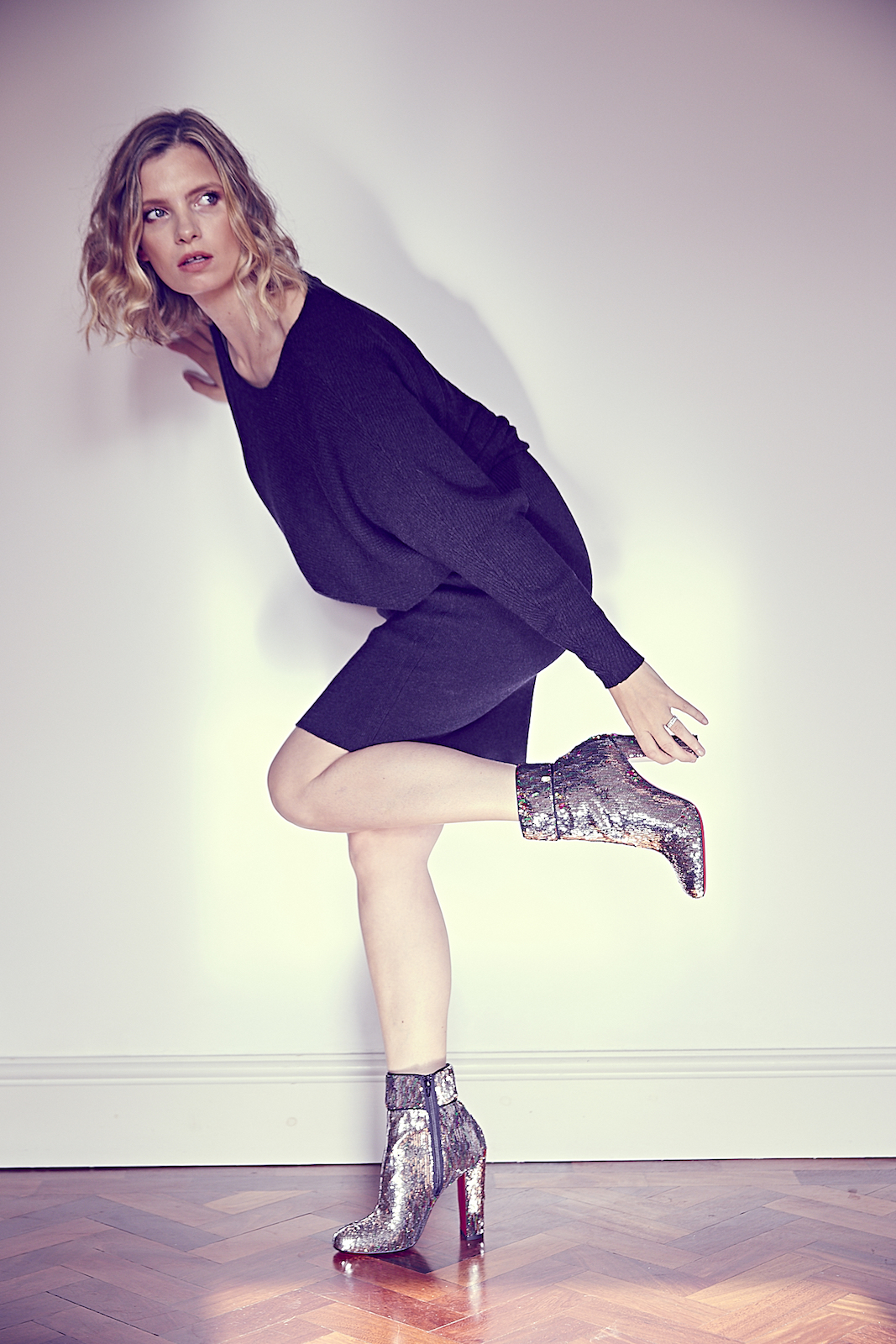 In fact, it’s the sort of dress you’d wear to a daytime lunch, probably – it’s warm, cosy, a jumper dress sexed-up. (Find it here* at Hush. It’s one of the best and most useful dresses I’ve found in ages.) But pull on those dancing boots and the Alexandra dress is a whole other ballgame – the shape suddenly reveals itself as being slightly 80s, the length of the dress seems shorter, more daring, the effect is more leggy. Go on, Louboutin Moulamax with your transformative powers! 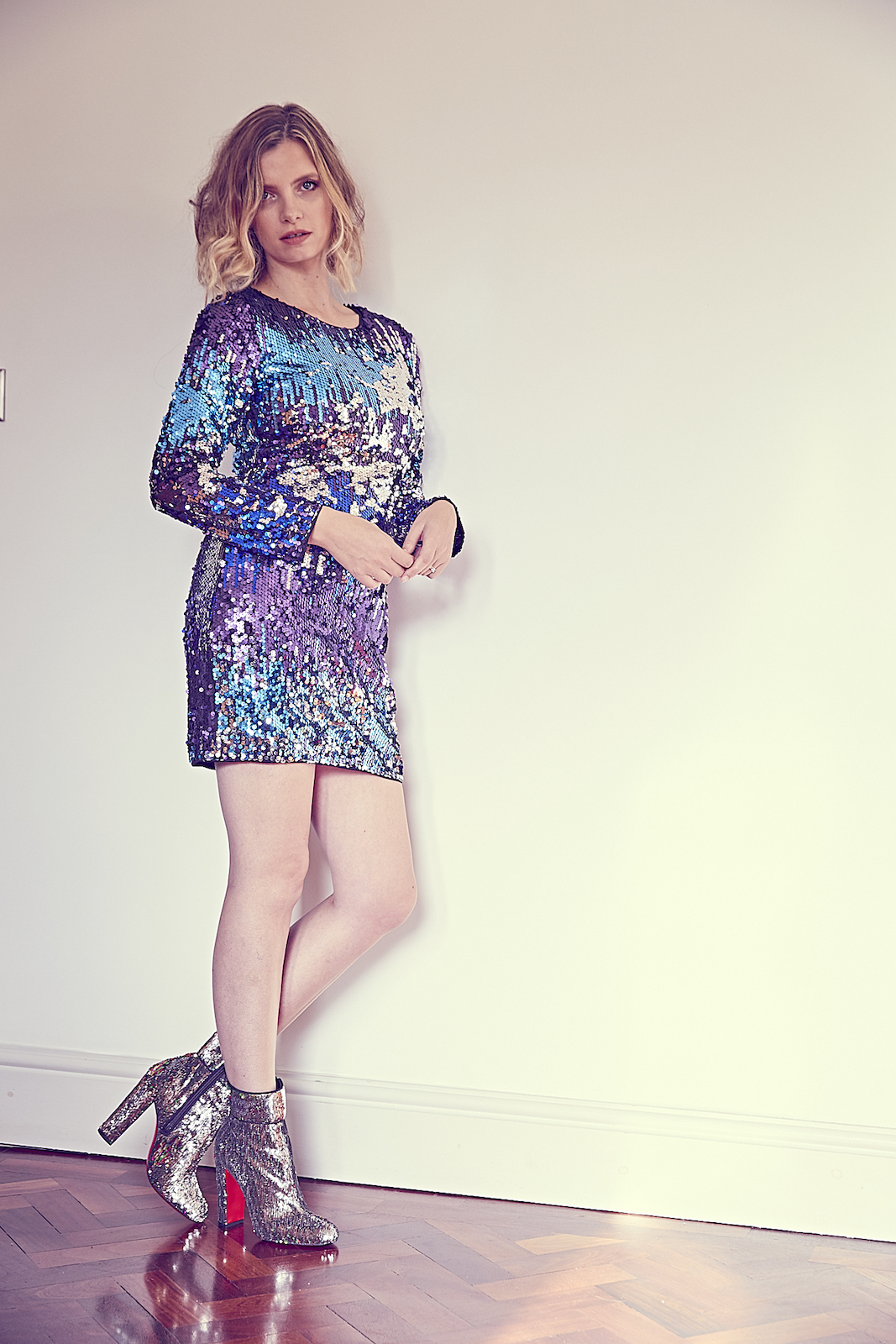 I’m not keeping this dress. It’s so short. I leant over to shut the door and I felt a distinct breeze on my lower regions. It’s been a long time since I wore anything that short and I simply don’t have the energy for it. Because it takes a lot of brain energy to wear something that’s only an inch below your hoo-ha; you have to constantly be telling yourself not to do things. Don’t put your bag on the floor, don’t bend over to pull the chair back from the table, don’t sit on the chair, if you do sit on the chair then immediately cover your entire lap with a napkin, and if you do sit on the chair then for Pete’s sake don’t even attempt to get up again! 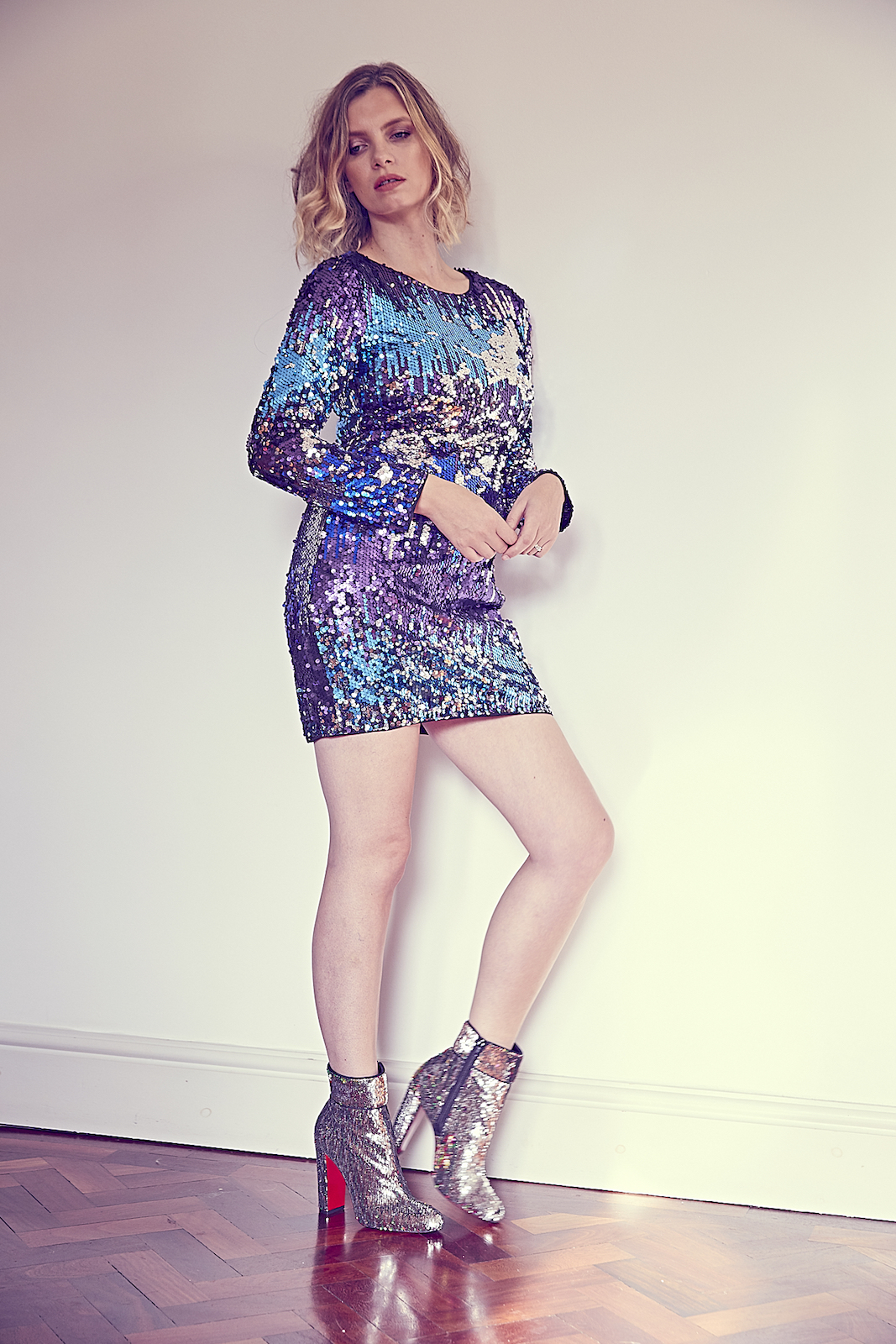 If you have a good memory for things like that, and by things like that I mean “not being able to do anything normal with your body in public, ever”, then this sequin dress is for you. (Joking aside, it’s not that short, I’m just paranoid. And it’s quite stunning – the colour is beautiful and the fit is very good, considering that sequinned dresses are usually cut like sacks. The zip on mine was a bit shoddy, but you just have to be careful doing it up. I got mine on ASOS here* – it was £68.) 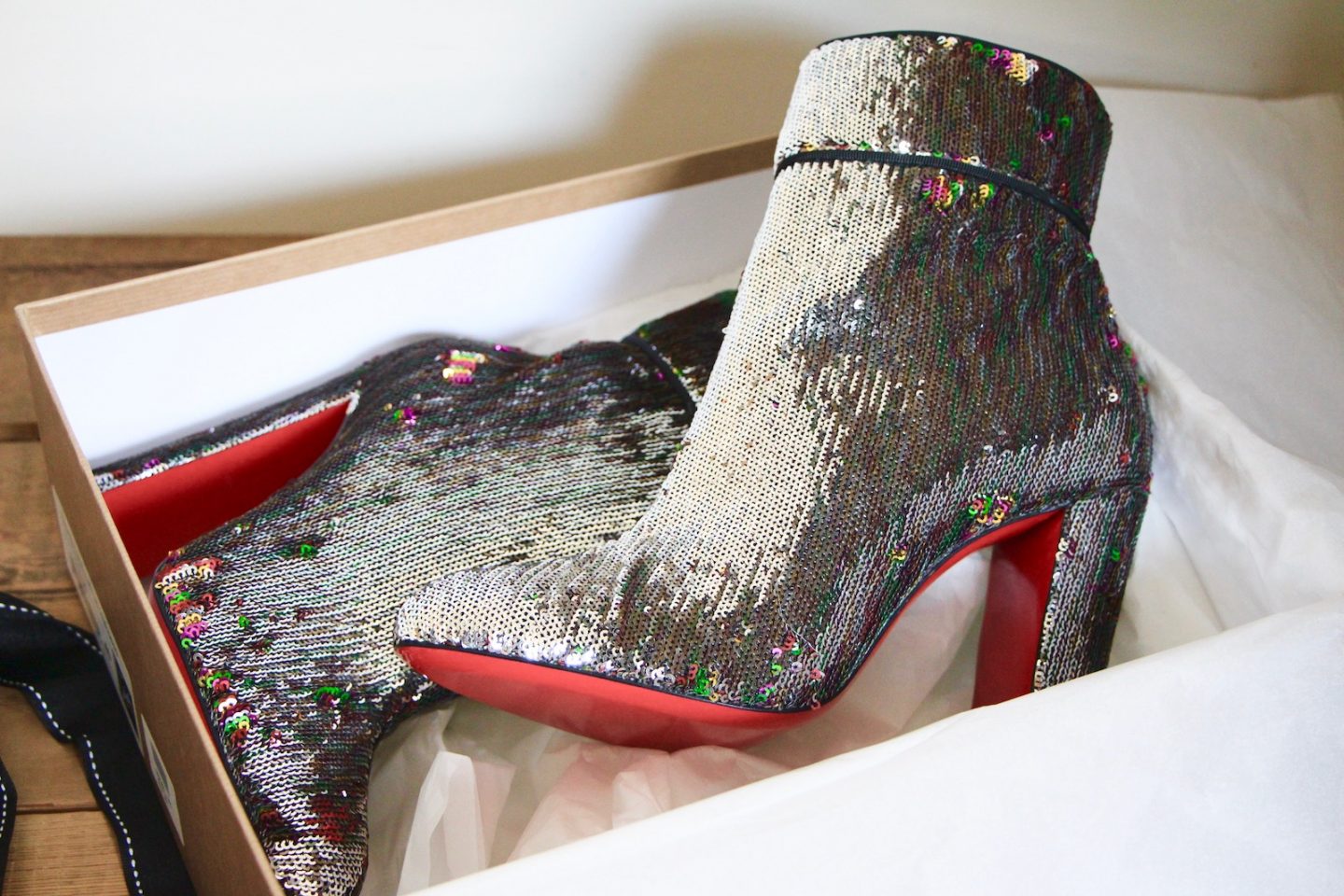 You can find the Moulamax at Net-a-Porter here* but I did promise a high-street alternative, and I think that these* from New Look are rather brilliant for £34.99! 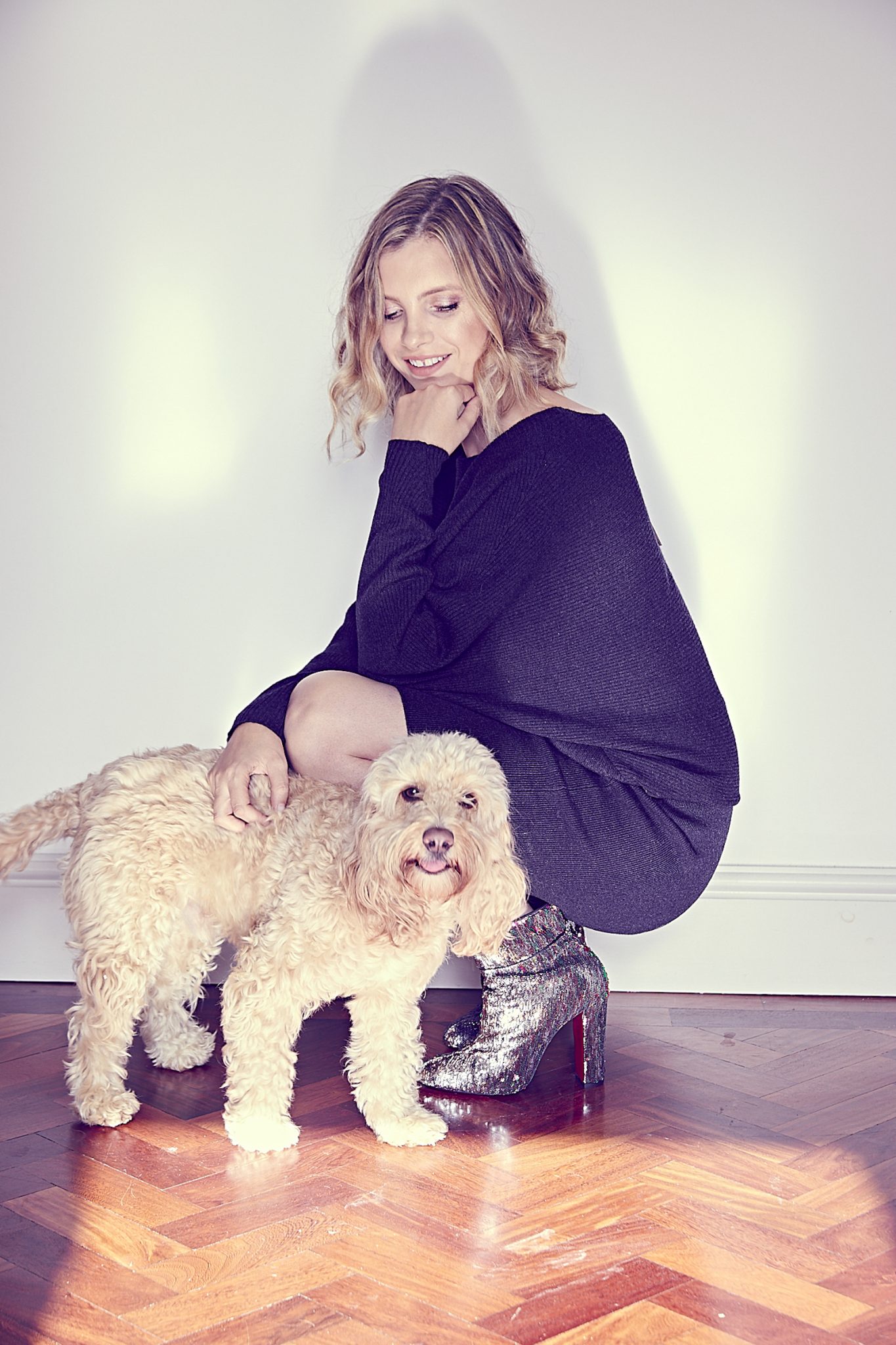 **apologies for “boot” singular. It’s a pet peeve of mine, but it was a style decision not to use the plural. Forgive me, but never forgive me if I ever say “trouser” or “jean” – “I’m pairing a black jean with a red shoe”. Stop it.