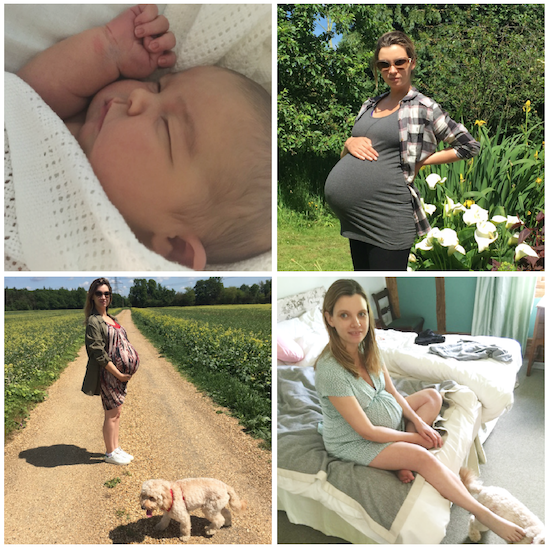 I’m not sleeping very well at the moment (I’ve just done five hours, but most of it spent tossing and turning and dreaming that I was in labour, which wasn’t very restful!) and so I’m glued to my laptop, most mornings, working through the huge list of posts that I wanted to get done before New Baby makes an appearance.

This pregnancy feels so different to the last; perhaps because we have a home to live in and I feel ready for the baby to arrive. With Angelica, who was an overdue baby by 12 days, we were consumed with all of the business of having our house renovated, and it was only when I passed the forty week mark that I started to get impatient. 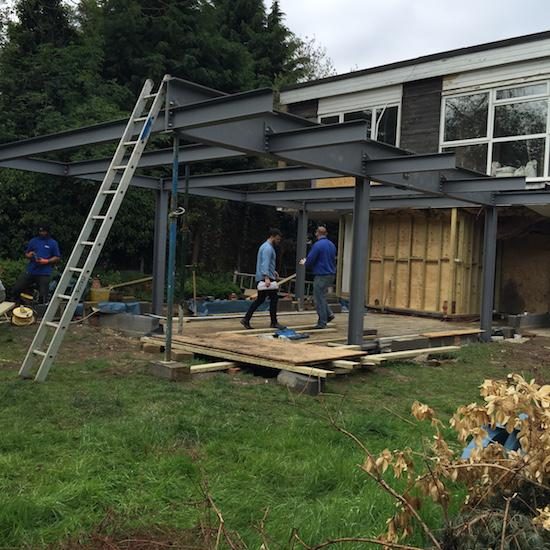 And that was only really because everyone else did. Goodness me! People texting constantly asking whether the “baby had arrived yet” and “bet you’re sick of waiting now” and “any day! How exciting!” I was in no rush for Angelica to appear, before then – we’d waited six years for her, the world’s biggest test of patience, it wasn’t as though a few more days were going to make any difference.

But this time I’m a little more ready – the hospital is three minutes away rather than an hour (I was so nervy about going into labour with Angelica, stuck out in our little holiday barn with hardly any phone reception!), we have people we can call on to come and help if we need it (our wonderful two-days nanny lives up the road!) and I have endless supplies of muslin cloths and babygrows and cereal bars (for me) and chests of drawers to store everything in and a big comfy bed to lie in and a television in my bedroom. Coming home with this baby will be like staying at the Ritz compared to the situation with Angelica! 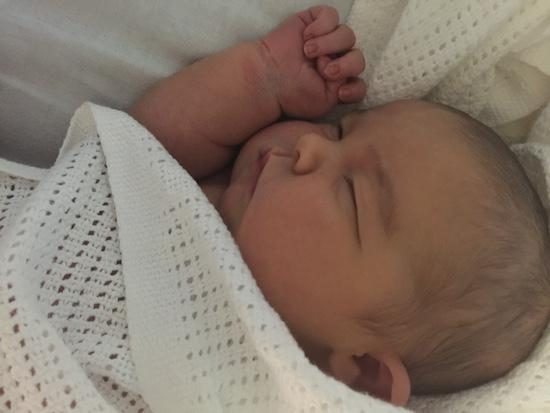 Angelica was born on the 17th June, 2015. She was due, I think, on the 5th. It started off as being the 10th, but then she was big on the scan (surprise!) and they adjusted the due date. When I was 38 weeks pregnant (same stage as I am now, writing this) we moved from our tiny holiday let in Hertfordshire, with its constantly breaking-down kitchen appliances, to a tiny holiday let in the middle of nowhere, somewhere near to Cambridgeshire.

I can’t quite believe it now, what we were doing – going from place to place, constantly whittling down our belongings so that by the time we arrived in our rural abode we just had a couple of suitcases, some plastic boxes filled with non-perishable groceries (tins, condiments, cooking oils) and my huge iMac computer screen. And as we were moving about, our actual home was a building site with huge invoices to be paid and problem after problem to be dealt with. The stress of it. No wonder I didn’t have time to think about a baby coming along! 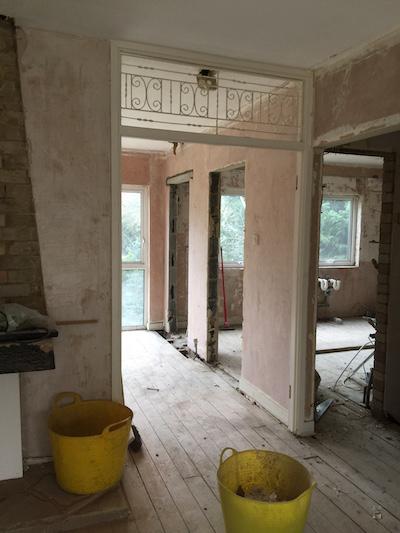 I think, now, that I was in total denial. It had taken so long to conceive, and I was so absolutely gobsmacked to even be pregnant and to hold on to the pregnancy, that I couldn’t think beyond pregnancy. I couldn’t imagine what it would be like to hold a tiny baby, or to breastfeed, or to have this warm little form sleeping next to me. I don’t think I felt particularly uncomfortable, either – even at the end of the pregnancy, and I was huge. Because Angelica was breech, she didn’t press down on my bladder (and other parts!) the way this baby does and so I was speed-walking daily up until the day that my waters broke. Not really waddling, either – striding. 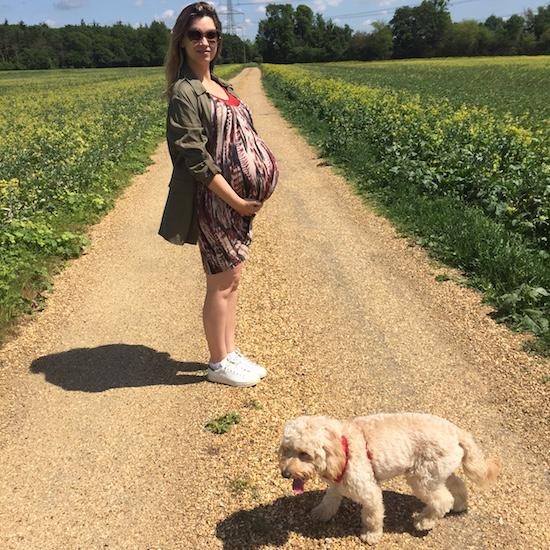 We would walk out from our little barn in the middle of nowhere, and it was so sunny for the weeks leading up to the birth, and we would walk Dexter around the fields and down into the woods, and then back in a circuit past a hidden research centre, which we liked to imagine housed zombie experiments and up a steepish hill which always got my pulse going! I remember the precise moment that I thought of Angelica’s name – Dexter was getting shouted at for eating sheep poo and the name Angelica Rae just popped into my head, fully-formed, and felt completely right. We didn’t know we were having a girl – we were absolutely sure she was a boy, and everyone we knew also thought she would be a boy. When they called out “it’s a girl” in theatre, it was the best surprise of my life. I was so stunned when she let out a cry, and she was across the room and she had come from me, this other thing that was all mine. Apparently I made the strangest noise, like an animal. 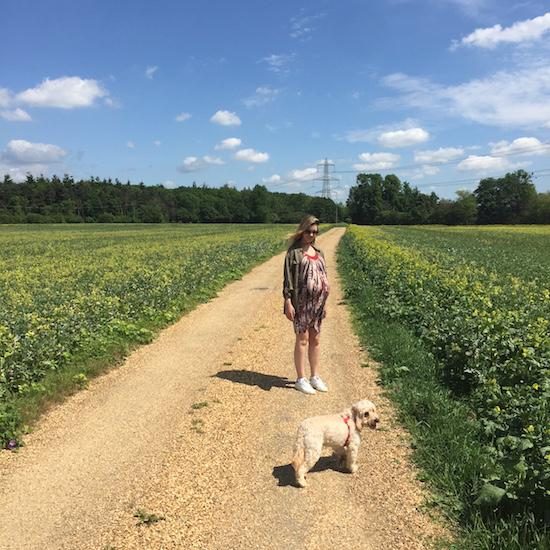 But before that we walked and walked; husband, me, Dexter, in the sun, waiting for Angelica. 38 weeks was soon 40 weeks, and still I was in no rush – I couldn’t understand the hurry that other people were in for my baby to arrive. I was still working, right up until the day before she was born – I think I made a brand video for a client about four days before she came, though it was never used because the light in the barn was so low and also I forgot to plug the microphone into the camera!

The barn was a tiny converted animal barn, I think – so tiny it felt like more of a caravan than a house. Rickety and dated, but very charming as it was surrounded with the most colourful, well-stocked gardens, and there was a duck pond behind it with geese and ducks. There was a minute little living room area, with two two-seater sofas facing one another, but neither actually facing the small tv set. So we would have one each (Dexter on my husband’s lap) and lie on them full-length, propped up with cushions and our feet at the other end resting on occasional tables, and we’d watch hours of television to pass the time. If we weren’t walking, or at Tesco (we went to Tesco a lot – I ate a lot!) or visiting the building site that was our home, or having antenatal appointments. 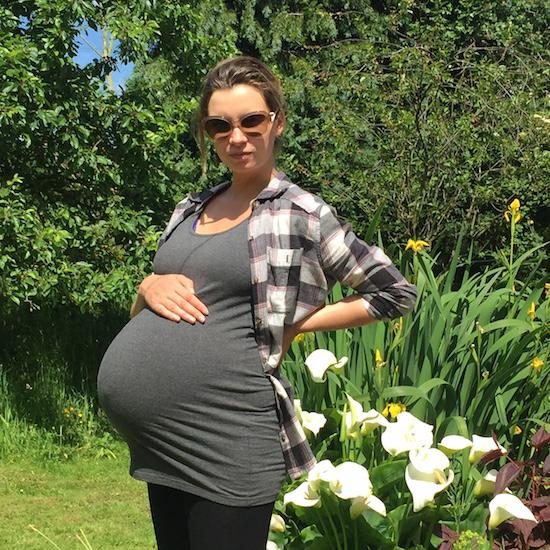 After a while, overdue baby waiting game did get to me. Mainly, I suspect, because everyone was scaring me about letting babies go too much overdue, but also because we had to move house again when I would be exactly 42 weeks pregnant. So we were faced with this crazy dilemma as the days went on – I didn’t want to be induced, was adamant not to be, in fact, but at this rate we’d be packing up the car and moving back to Hertfordshire with me actually – one way or another – having the baby. I made efforts to get things going “downstairs”. One day I ate a whole pineapple (I think I was 41 weeks – the post is here) and it almost took the lining of my mouth away. Twice I had sweep. I’m pretty sure I forced some terrible, ridiculous sex upon my husband. I ate curry. We walked fast – I ran up a hill. 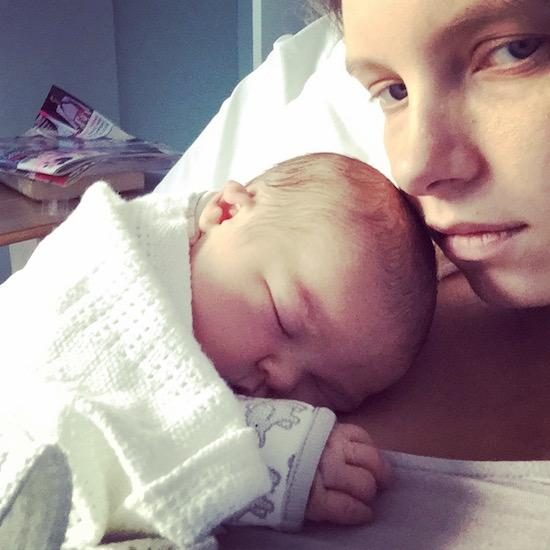 And finally, 11 days over, my waters broke and the whole birthing rigmarole began. You can read that story here. I’ve rambled in this post, but waiting for New Baby to come brings back so many memories. I think that this time round it’s more exciting, because I know what to expect and how utterly, incomprehensibly amazing it is to hold a baby and for it to be all yours. I can almost smell this baby. I haven’t spoken to him/her, not once (we’ve been communicating telepathically and anyway, I always felt silly talking to my tummy) but we are connected. There’s a baby-shaped little nest waiting for it in our family and I’m ready to see what it looks like and see the first smile and all of those wonderful things all over again. 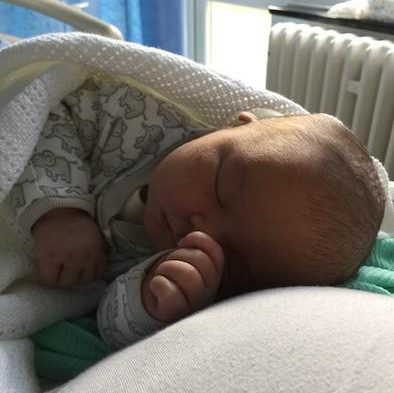 Last time I was Waiting for Angelica, this time – who am I waiting for? Who will this baby turn out to be I wonder?