Apparently, people queued from 6am to get into the new Westfield Stratford City. 6AM! Why? I ask that question not because I think that Westfield isn’t worth queueing for, but because at 10.30am I waltzed straight in and up the escalator! I mean, it was busy – rammed – but not to bone-crushing proportions. Why you’d want to pull yourself out of bed in the dark just to be the first through the doors at a shopping centre I have no idea!

Shopping destination rather. ‘Centre’ kind of underplays the sheer size of the place. It’s huge – the biggest shopping area in Europe. Over 300 retail stores, 60+ places to eat, a huge cinema and (old lady excitement coming up…) a massive John Lewis and M&S! I loved the original Westfield when it opened in Shepherd’s Bush, because I like ‘mall’ style shopping – it beats barging your way up and down Oxford Street any day. Alas, Westfield 1 was a little too much of a trek for me – all the way across town on the central line, and I rarely have any castings out that way. So Westfield 2 is a godsend (or the work of the devil, depending on whether you’re me or my accountant) because I can reach it in all of fourteen minutes. If Mr AMR would let me drive the new car, I’d get there even quicker!

I took some pictures yesterday at the opening ceremony, but they’re rubbish. Partly because I didn’t realise that my press pass actually allowed me into – you know – press areas, but also because pictures of people on stages are always rubbish. It was Nicole Scheringergergerger, just in case you were wondering. She came on wearing a plastic flasher-mac and a very long ponytail. I was more interested in watching Boris Johnson (Mayor of London, to overseas readers) to see whether or not he’d break out into a little dance. He would have been about the only person that did  – I have never seen so many corporate ‘suits’ in one place in my life! Oh, hold on – I have. The opening of Westfield Shepherd’s Bush. Check out the sea of suits: 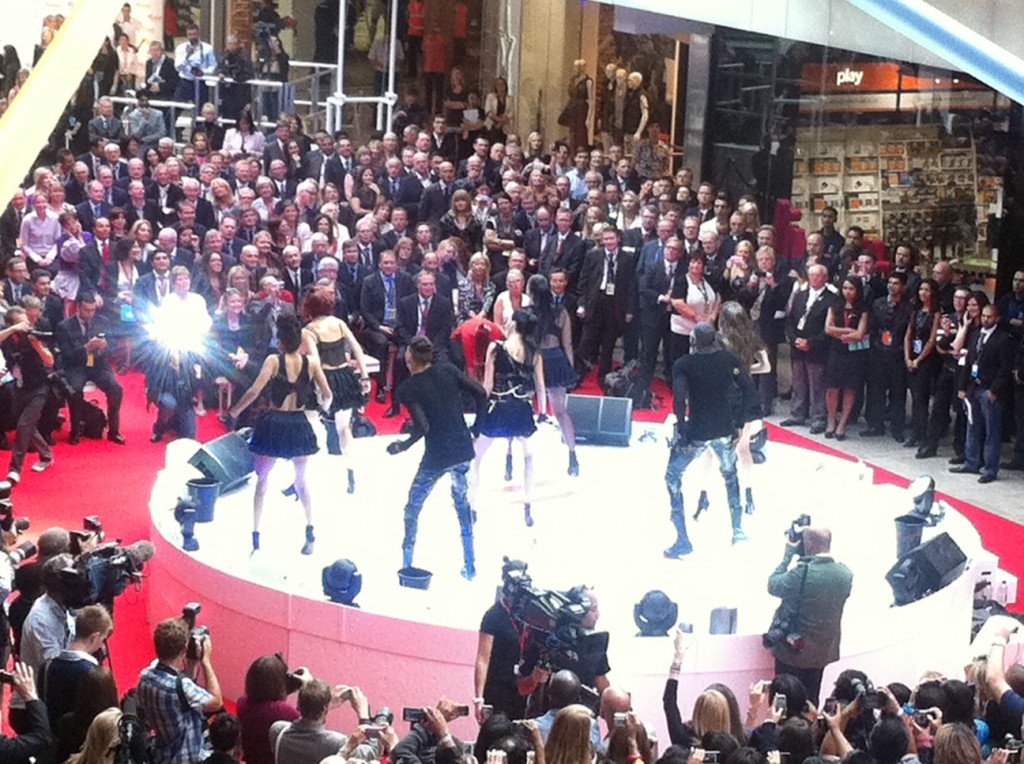 Also spotted: Pixi(e?) Geldof with rather charming curly peroxide hair and a very fetching polka dot dress! Let me see if I can nick you an image off Google… I can’t find one. What I did find was a 3AM girls‘ piece slating a pic of  Pixi(e?) obviously doing a soundcheck this morning and looking a little bedraggled. They also call Nicole Sherzingergergerger Nicole Shitsinger, which made me laugh… I’ve never seen 3AM before, it’s very sharp. I wouldn’t like to be on the wring side of them!

Anyway. I shall be back to Westfield soon to have a good old rummage around, but I can already tell you – categorically – that I love it. Welcome to my life, Westfield Stratford City!