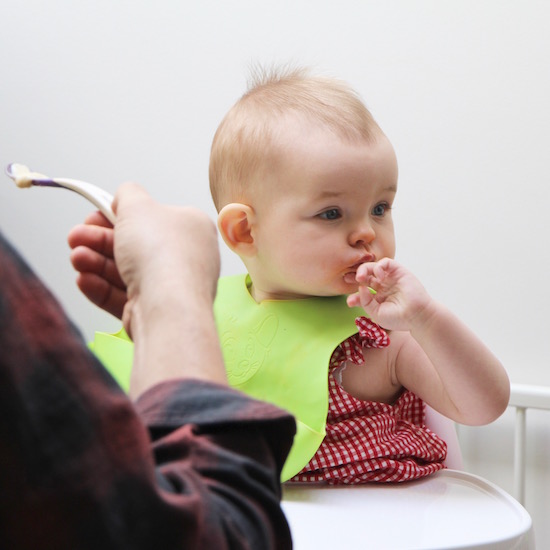 As I’ve mentioned many a time, we really struggled to get into a routine with Angelica. Perhaps because for the first few months we were sort of homeless, or at least drifting, because our house was being renovated and we spent a lot of time in the car. Routine just wasn’t possible because we were backwards and forwards to a building site, driving to wallpaper shops and picking up tiles and kitchen taps and door handles.

But I think that I also found it hard to get my head around the idea of routine because so much of it seemed dependent on feeding and mealtimes, and I just used to whap out the old boobs whenever the baby seemed hungry, which was a lot. How do you even begin to stick to a routine when a baby is latching on every couple of hours?

Now I realise that what I could have at least done was to determine a proper bedtime earlier on – I need to read back through my monthly updates, but I’m pretty sure we didn’t start the 7pm bedtime until quite far down the line. (Would it have been Christmas? I really can’t remember, it’s all a complete blur already!) A definite bedtime was a bit of a revelation when it happened – it took weeks and weeks to get her to actually go to sleep at a regular time, but at least it gave some order to the day.

But then I do have to say that the lack of routine worked very well for us, our little family unit, because our lives were all over the place and the baby just sort of slotted in; we bundled her up into the car when we needed to, put her to sleep in the bassinet of the pram if we were staying late at a friend’s house, and if she wanted feeding in the middle of John Lewis? I just hot-footed it back to the car and fed her there. Nothing felt too stressful, if I’m honest, just a little bit inconvenient at times, if I couldn’t find an appropriate place to breastfeed.

And so yeah, routines. I’m wondering whether I would do anything differently if I did it again. Possibly not. I love this two-naps-a-day-plus-night-sleeping business, as I have time on my own to get things done, but I didn’t mind the months before this, when I had a baby stuck to me for almost every hour of the day. I miss her when she’s having her sleeps, now. (Though I’d imagine when she starts hurtling around and I’m totally knackered and she’s putting her fingers into plug sockets and banging the coffee table with my hairbrush I’ll be feeling something completely different…)

Anyway, this is all a bit of a blah-blah-blurb to what I really wanted to say, which was I found this online. It’s a site with a kind of “outline routine” for babies of different ages. So if you wanted to start a routine and didn’t have a clue where to begin, their baby schedules could give you some pointers. Then at least you could start with that and find out what worked for you. My current routine (at 10 months) is up at 8am (YESSSSSSS), nap at 10.30am for an hour and a half, nap at 2/2.30pm for an hour and a half and bedtime at 7pm. Feeding is a lot more random, but sort of fits in when you’d expect it to. I usually end up doing a breastfeed at 8am, 4pm, 7pm and one at either 2am or 4.30am – if it’s 4.30am then waking up time tends to be 8am. A 2am feed means that she’ll more than likely wake up at 7.3o, but she does quite well at entertaining herself in the cot. (Is there any better sound than baby chatter when you’re in that semi-doze state?)

You might think that these routines are complete claptrap – and I’m sure there are others online to look through – but if you’re at a complete loss, then they might be helpful. I found it interesting to see how many feeds a baby still needed at ten months (completely different opinion to my health visitor’s) and thought that there were some good tips on feeding once in the night rather than getting a really early wakeup call! The link below takes you through to the 10 Month Old Baby Schedule, but they have guidelines for every age.