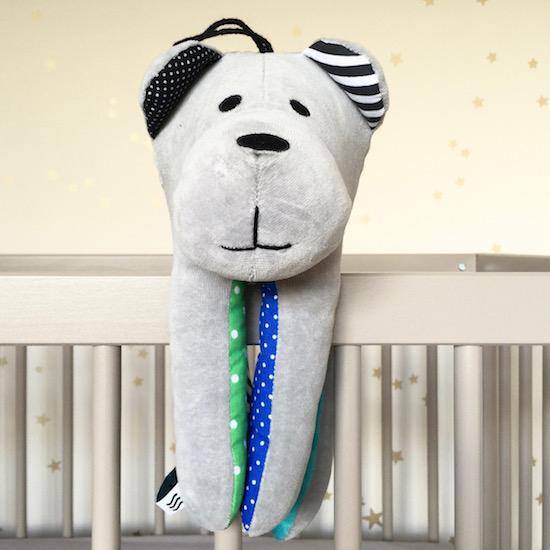 Well alright, not actually last night, a night about two months ago. Possibly longer, now. A Whisbear saved my life. Alright, it didn’t save my life, but it did save my sanity. And to think – I poo-poohed the idea of even reviewing one, thinking that Angelica was far too old, now, for white noise makers and the sound of the tumble dryer and nap times in the pram with the hoover running…

I thought that we had the sleep situation pretty much down to pat, but after a week or so of Angelica sleeping through, she began to wake up again multiple times a night (teeth? hungry? who knows) and the days of walking about like a knackered Zombie were back. I had a modicum of success with the iPhone app “Sound Sleeper”, but having to leave my iPhone in the baby’s bedroom all night, from 7pm, wasn’t ideal. I didn’t like the idea of the baby being next to the phone when it was on, either, so I used to put it on airplane mode, which meant that nobody could text or phone me after seven.

So the Whisbear, then. A battery-operated white noise maker (it’s just a continuous hushhhhhhhhh sort of sound) inside the head cavity of a strange-looking teddy that has a bear’s face and the legs of an octopus, except that there are only four of them. A bear-squid hybrid. It would be a thing of nightmares, if you allowed it to be – I can imagine it in Toy Story, next to a doll’s head mounted on a spider’s body. But if you look at it in a cute way (like you’re supposed to, if you have a normal mind that hasn’t been totally corrupted by an overactive, morbid imagination) then it’s very cuddly and sweet. And the legs, despite being long and weird, actually serve a great purpose: they are magnetised so that you can position the Wisbear over the side of the cot rails and the legs sort of pinch together so that it stays in place. Very clever!

To activate the white noise, you just need to squeeze the Whisbear’s head, hard. He then whispers his  hushing sound for about forty minutes until the noise fades out. But then here’s the good bit: if the baby starts to cry after this time, the Whisbear jumps into action and makes his shushing noise again! This, for me, is the standout feature – on my iPhone app, I had to set the white noise so that it played continuously through the night, which didn’t feel right (the things we do for a good night’s sleep) – the Whisbear stays silent until called upon. No having to get up to restart an app or jiggle the baby back to sleep…

My sister put my off buying a Ewan the Dream Sheep (very popular baby soother) when Angelica was tiny – it hadn’t worked for her own baby, but I wish I had used that beforehand so I could have done a comparison! From what I can see, Ewan has a few different sounds and a glowing tummy (check out the first review on Amazon that comes up, it made me laugh so much – Ramsay the Nightmare Goat!) but doesn’t have a cry sensor function. And for me, it’s the cry sensor that works so brilliantly – it doesn’t go off when a dog barks loudly, or a helicopter flies over, or the man next door, who is obsessed with powertools and building things in his garden, starts up his angle grinder – it seems to be quite adept at singling out a baby’s cry. Not like a baby monitor that just kicks in when there’s a noise above a certain volume.

So yes, the Whisbear is a permanent fixture at bedtime and both naptimes. It’s a little ritual now, where we put the sleeping bag on, squeeze the Whisbear’s head and then pop the bear on the rails of the cot. And then Angelica reaches up for the bear and pulls him down so that he’s lying beside her. It’s very sweet. I should just turn him on and put him straight in beside her, like a normal, mature adult would, but I can’t help my stubborn ways – I want him on the cot rails, she wants him in the cot. It’s a battle of wills.

You can find Whisbear on Amazon here – he’s (God knows why I’ve decided he’s a he) £41.98 with the cry sensor function and around £30 without, but I would definitely opt for the cry sensor. Without it, the bear has less to sing and dance about and is about the same price as Ewan the Sheep God.