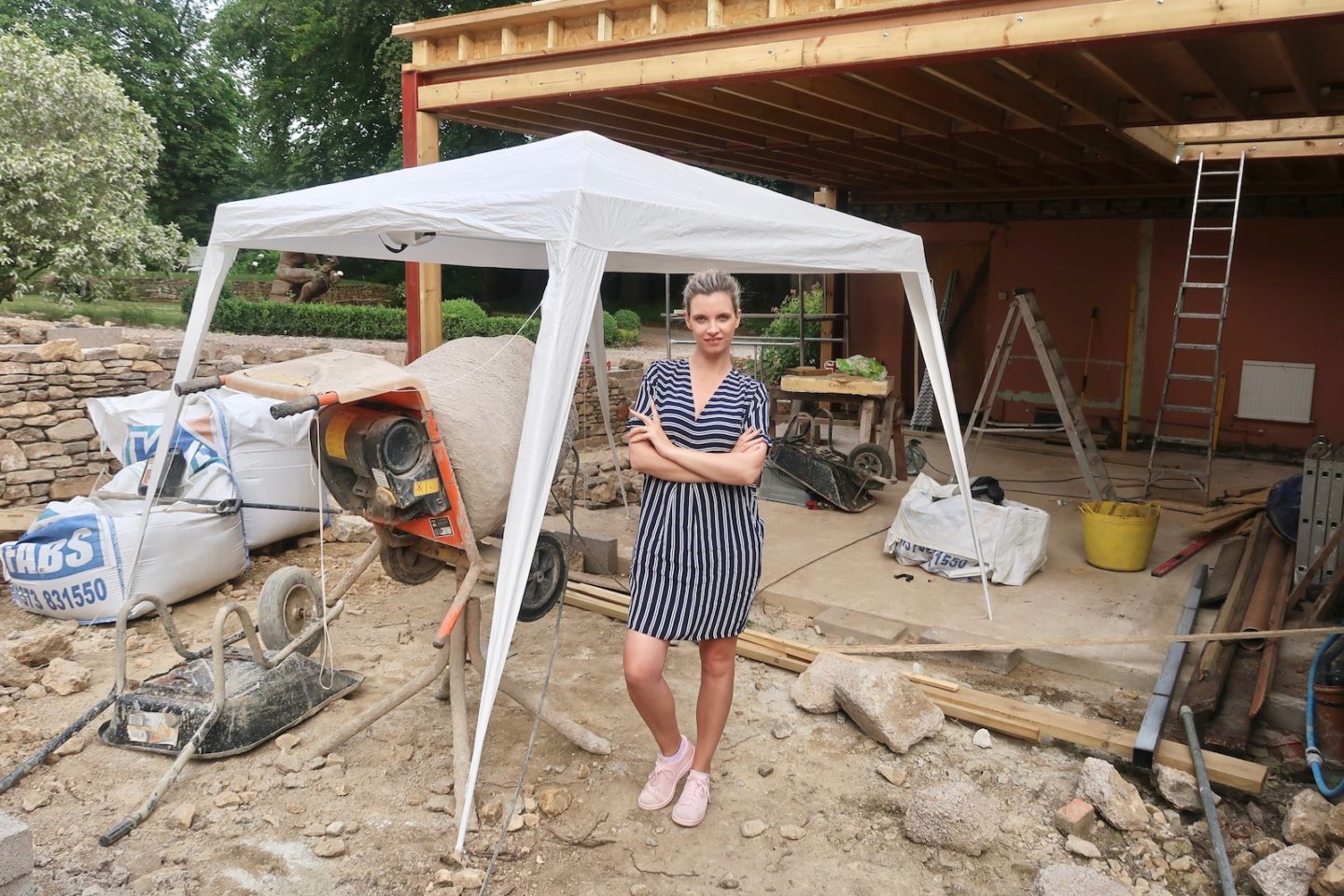 Question: is a part of a building still called an extension if there was something there before it? I’ve been mulling this over because I’ve been automatically referring to our new dining room as an extension but is it? We’ve demolished one thing (a weird, shoddily-constructed annexe) and we’re building something bigger and completely different in its place, so what’s the term for that?

Nobody? Let’s just stick to extension then.

I thought it was about time I updated you on the building work that’s happening at home – I feel as though I’ve been rather slack on this front. The truth is that it hasn’t really been on my mind; it’s almost like the whole thing is happening to someone else. I hear bangings and drillings behind the kitchen wall and I almost break my neck tripping over various temporary pipelines when I go up the hill to put the chickens to bed, but apart from that, no disruption at all.

Apart from financially, of course. Because there’s nothing more financially disrupting than having building work done. It’s worse than buying the house in the first place. At least when you buy something it’s a fixed price; with building, you never know what’s going to crop up and make you weep hot tears over your online banking screen. Buried pipes, walls hiding ancient skeletons, rafters sheltering bats. (I don’t have bats or skeletons, by the way, but it does happen. Apparently, the worst is if you find an ancient artefact as you’re digging – building then has to cease and people descend on your garden with the crew from Time Team and erect huge tents and then spend years chip-chip-chipping away with a tiny chisel, brushing the dust off their fossils with a toothbrush. God, how mad would that drive you? Imagine trying to build your dream kitchen-diner and finding an urn from 760BC? I have to be honest, I’d probably not tell anyone. Polish that urn right up and use it as a vase.)

So it’s been relatively smooth, so far; demolition of the useless annexe was fast and furious and now we’ve got the bare bones of the new structure, which is (to be basic about it) a glass-sided, grass-roofed box.

Now, you may be wondering why the title of the building update is what it is; Why We’re Building An Extension. Surely we’re building an extension for the same reason as most people build an extension – more space? Not quite. We’re building an extension because there’s absolutely no connection whatsoever with the garden – once you’re in the house, you’re in, there’s no view. I don’t think that being able to enjoy the outdoors from indoors was high on the Georgian priority list, really, and so there’s nowhere on the ground floor where you can really throw open some doors and have a cup of tea in the sun, or sit next to an open window and look out at the kids playing. It’s just not configured that way.

And I realise that this isn’t the end of the world and is also quite obviously a “luxury problem”, but actually if you’ve been used to having some sort of access to the garden – even if it’s just your kitchen door leading straight out onto your patio, so you can easily set up a little table and throw some plates on it and have an impromptu lunch al fresco – it feels quite stifling. Hence, I suppose, the huge trend for people putting kitchen/diner extensions on their houses with an end wall of glass – bring the outside in, make it light, count your garden as an extra room.

Anyway, we bought the house with planning already in place for the extension so that was always on the cards – we’ve been back through planning because we wanted to add more glass and take out some pocket walls, but essentially we’re doing what was always part of the masterplan. Add on an everyday living “section” that has glass sides that can be completely opened up to the elements and create more connection with the garden.

I’m writing all of this and I’m suddenly aware that you’re going to hear it all again in the video, so I’ll stop now. I’ll be doing a little series on the building works – the next one will show a plan of the space and talk about how it’s being finished and some of the decisions we’ve had to make – but this one deals with the beginnings and the basics. Architect, planning, builder and costs.

So hit play, settle on in and please excuse the hissing throughout the end parts of the video; Mr AMR turned on the sprinkler to help bed in his turf around the trampoline. Not a euphemism, but if ever a sentence should be one….